Workshop for Readers on Funeral Ministry is oversubscribed 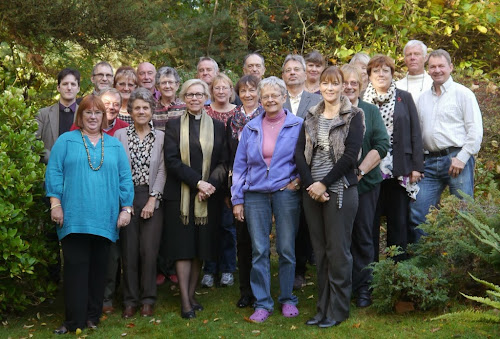 A workshop on funeral ministry for Readers and Readers in Training was held at St Columba's House, Working on 25-27 October. Completion of such a training workshop is a requirement if Readers (licensed lay ministers) are to be authorised to conduct funerals. This weekend particular course was fully subscribed, with 20 participants from across the diocese, and people on a waiting list!

The Director of Training, Canon Ulla Monberg, and the Senior Tutor and Advisor for Reader Ministry, the Revd Elaine Labourel, were the course leaders for this workshop. Sessions were held on aspects of pastoral care and bereavement. Practical work was done on putting together a funeral using the rich resources of Common Worship, and guidance was given on officiating at a funeral rite itself.

It was one of Bishop Geoffrey Rowell's last appearances at a diocesan event. He gave a lecture on the changing context of funerals and presided at a requiem mass at the event.

Posted with Blogsy
Posted by David Hamid at 21:34 0 comments
Email ThisBlogThis!Share to TwitterShare to FacebookShare to Pinterest

There's a first time for everything 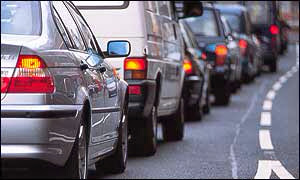 It had to happen one day, I suppose. Over 11 years of almost weekly travel to parishes in the diocese and never a single scheduled service missed - until this weekend, that is.

An accident closed a section of the westbound M4 heading to London's Heathrow airport and I was trapped for 2 hours, missing my flight to Berlin. Rebooking was not a problem, except it was the last flight of the day. So I am transferred to the first flight in the morning which arrives in Berlin at 1130, exactly one hour after the start of the service at St George's at which I was to preside, preach, baptise and confirm.

Canon Christopher Jage-Bowler and the Revd Dr Irene Ahrens, the clergy at St George's, having received a panicked call from a frazzled bishop, calmly improvised with some liturgical ingenuity. They would hold the normal sung eucharist, and baptise those to be baptised in the morning, and the confirmation candidates will come to the evening service in central Berlin at which I am also presiding. So with a little shuffle, and some liturgical flexibiity (just ignore the rubric about the full initiation rite of baptism, confirmation and holy communion being celebrated as a unity), and we are back on track. My thanks to the clergy for their swift and flexible response. 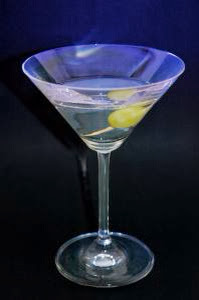 Posted with Blogsy
Posted by David Hamid at 21:21 1 comments
Email ThisBlogThis!Share to TwitterShare to FacebookShare to Pinterest

Commemoration of the 10th anniversary of Istanbul bombings

The parish of Christ Church with St Helena's in Istanbul yesterday marked the 10th anniversary of the bombings at the British Consulate General which killed dozens of people including the Consul General, Roger Short. The Chaplain of Christ Church, the Revd Canon Ian Sherwood, informed me that the UK Foreign Minister, William Hague, read the lesson at Morning Prayer and that the Consulate staff hosted an excellent gathering where the Turkish Foreign Minister and Mr Hague spoke. Many family members of those who died attended the events. Fr Ian also attended the mosque with some consular staff members who are Muslim.

The terrorist attack on 20 November 2003 was the worst ever experienced against a British diplomatic mission. St Helena's Chapel is one of the historic consular buildings.

Posted by David Hamid at 06:00 0 comments
Email ThisBlogThis!Share to TwitterShare to FacebookShare to Pinterest

Learning to walk together 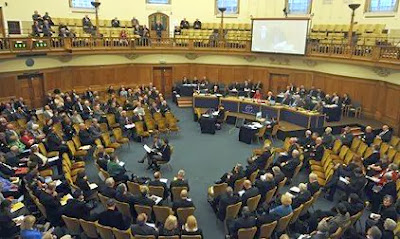 Today I think I witnessed the Church's decision-making at its best.

The General Synod (which I am attending during the episcopal interregnum) overwhelmingly gave welcome to a package of proposals which charts the way forward to permit the consecration of women as bishops. This is the first stage towards a process. Final approval will be at a later stage.

The remarkable thing was to witness members of the Synod from every theological stripe in the Church of England give support to the package of proposals. There were 33 speeches, and all but two were largely positive towards the package. Yes, there were wise words of caution, and a reminder that we should not be complacent as we move forward as there will be hard work involved in the next stages. In particular there was a warning not to tinker with the careful and delicate balance that has been sought in the proposals.

5 guiding principles, which must be held together as they create the balance needed, under-gird the proposals:
The spirit in the Synod chamber was one of graceful listening, mutual respect for differing theological views, and a strong desire for unity, so that the Church can move forward in mission. The motion to welcome the package of proposals was carried with 378 votes in favour, 8 against and 25 abstentions.

Perhaps we are learning to walk together on the way, as syn-hodos means.

New Reader to serve St Michael's in the Gard

On 26 October, a new Reader was admitted and licensed in the diocese, to serve in the parish of St Michael's in the Gard, France. Brenda Juntunen was presented by her parish priest, the Revd Stafford Low. A large congregation gathered to support her, following the three years of extensive theological study and preparation which is required for this ministry.

The Revd Jenny Deverill, the former priest-in-charge, who founded this congregation back in 2006, was also present, along with the Revd Prebendary, David Paton, a retired priest who is linked to St Michael's, and the Revd Roger Smithm, the priest-in-charge of the neighbouring parish of St Pargoire (about 120 km away!).

At the same celebration, a member of the parish, John Smith, was confirmed.

St Michael's meets in an ancient building of the Reformed Church, in the village of Boisset-et-Gaujacm, in the Languedoc Roussillon region. The congregation's website is here. 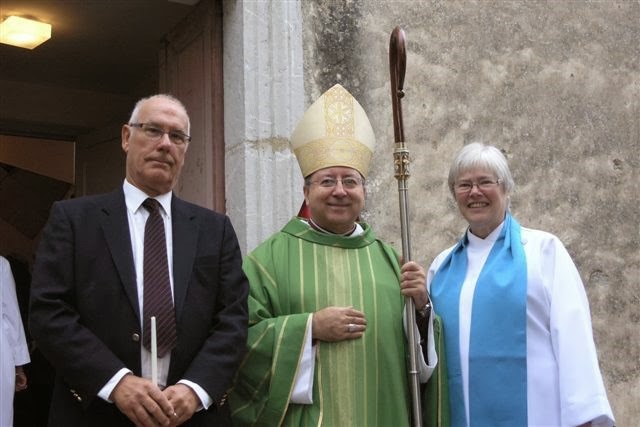 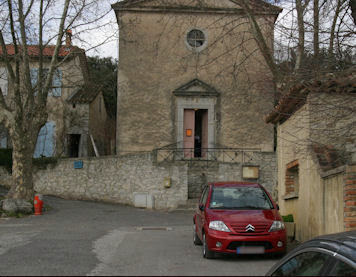 Triple Celebration at the Church of the Ascension, Cadenabbia

One of the lesser known gems of the Diocese in Europe is the Church of the Ascension in Cadenabbia, on Lake Como, Italy. This is a church that was founded in the late 19th century, which is now connected to the Milan parish, but which continues to be served by a series of visiting locum priests. It is a beautiful building in a most exquisite location.

Recently, one of the locum clergy, the Revd Stephen Anderson, reported on a significant event in the Church of the Ascension when on the 29th September there was a "triple celebration": the feast of Michaelmas  the 122th anniversary of the dedication of the building, and a service of thanksgiving for the restoration of the organ.
The Music Director, Janet Anderson, spearheaded an organ appeal which raised €30,000 in less than 2 years. Several benefactors and a large congregation were able to enjoy voluntaries on the restored organ played by Maestro Ennio Cominetti, a well known local recitalist, who showed off the power and range of the organ to good effect, before and after the Sung Eucharist.

During the service, Fr Stephen dedicated the restored organ, saying that “it should not merely produce a pleasing combination of sounds and tunes, but lead to an expansion of the heart and the soul”.

The Church of the Ascension exists to serve local English speaking residents and provides a source of spiritual refreshment for the many holidaymakers who visit picturesque Lake Como and the surrounding area during the summer season. 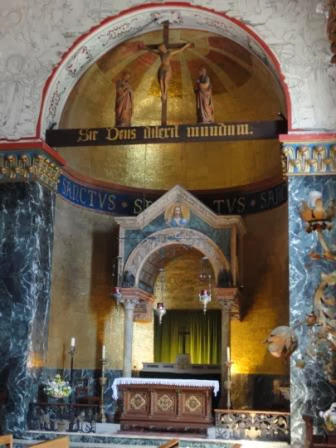 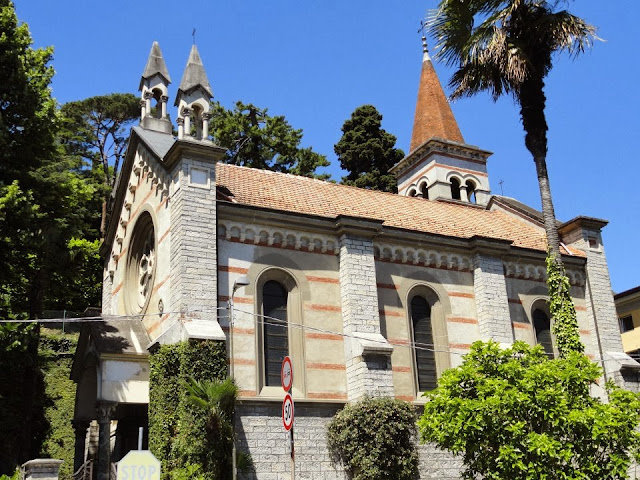 Posted by David Hamid at 13:53 0 comments
Email ThisBlogThis!Share to TwitterShare to FacebookShare to Pinterest 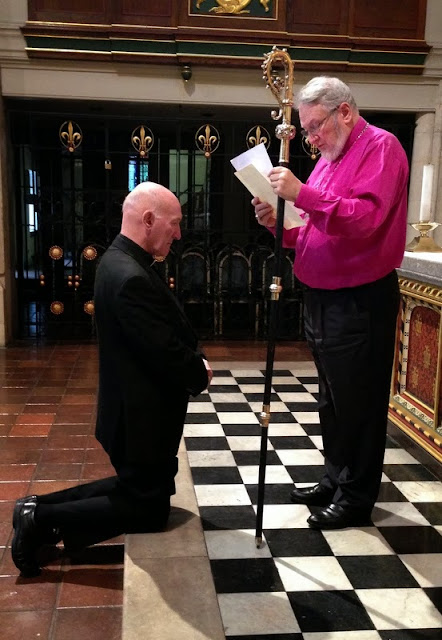 The Revd Ian Naylor, who has been the Acting Archdeacon of France, was collated as Archdeacon (the real thing!) at a service at Bishop's Council on 25 October. He also was named a canon of the Cathedral Chapter, with the stall of St Bernard of Clairvaux.

We congratulate Archdeacon Naylor on this appointment, and assure him of our prayers. It is good to welcome him, now fully, into the Bishop's Senior Staff Team. He continues to be the priest-in-charge of St Andrew's Pau. 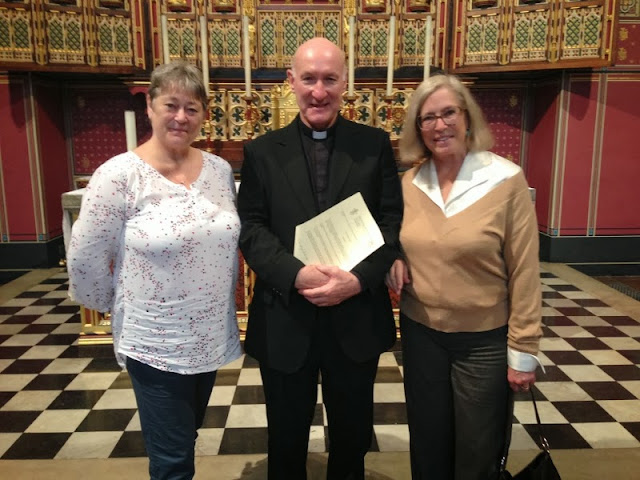 Posted by David Hamid at 09:20 0 comments
Email ThisBlogThis!Share to TwitterShare to FacebookShare to Pinterest