Generous Love and the Embassy and Hospitality of God 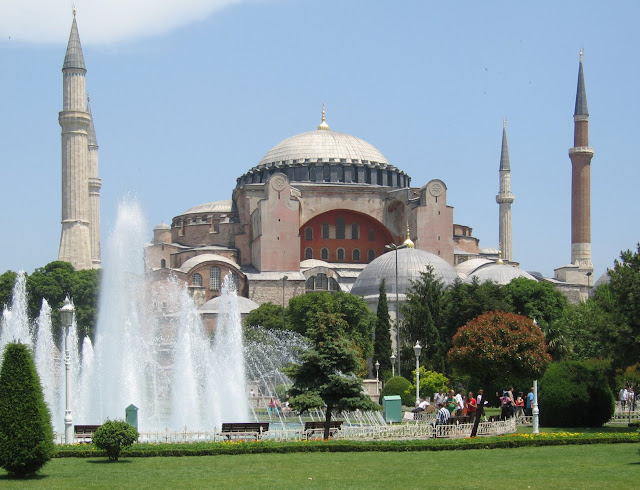 In 2008, an Anglican Communion report on interfaith relations entitled Generous Love, called upon Anglicans to practise "the embassy and hospitality of God". As an embassy, as ambassadors, we have been entrusted with the ministry of reconciliation. The challenges of hospitality include building relationships of trust and respect. Generous Love has an important and insightful sentence: "none of the places, situations or societies where we meet and greet are the exclusive territory of any one group; they are entrusted by God to be shared by everyone, since all humans are made in God's image".
I reflected on this today. The great building and world heritage site which is Hagia Sophia in Istanbul was built as a cathedral in 537 and served as the seat of the Patriarch of Constantinople until the Ottoman capture of the city in 1453. It was then turned into a mosque. So it has been in its history a sacred space for both Christians and Muslims. In 1934 the secularist Turkish government turned the building into a museum - and it has remained so until today, when Muslim prayers will be publically recited, turning it back into a mosque.
One could argue that as a museum the shared heritage of the building was preserved and historic polarisations associated with it belonging exclusively to one group were avoided. Visitors, whether Muslim, Christian or of any other or no faith, could be reminded of the entangled religious history of this part of the world, and therefore for the need for dialogue, tolerance and understanding among these two great world religions. Garo Paylan, an ethnic Armenian and opposition member of the Turkish parliament expressed this succintly, "Hagia Sophia was a symbol of our rich history. Its dome was big enough for all".
In the conversion of Hagia Sophia from museum to mosque what must be avoided is further polarisation: in some Muslim countries making life more difficult for minority Christian communities, and similarly for minority Muslim communities in other places.
But today we know that our Orthodox brothers and sisters around the world are especially saddened by this re-inauguration of Hagia Sophia as a mosque. So we extend to all who lament this occurrence, our love and support.
Posted by David Hamid at 09:38 0 comments
Email ThisBlogThis!Share to TwitterShare to FacebookShare to Pinterest

For any who might be interested, Unité des Chrétiens, the French ecumenical journal has run an interview with me which touches upon many themes of our Diocese in Europe: ecumenical life, Anglican identity, Brexit and our multicultural context. The journal itself (despite this interview!) is always an interesting read, covering ecumenical life in France, Europe and beyond, from Oriental, Orthodox, Roman Catholic, Anglican and Protestant perspectives. The link to the journal's site is here: https://unitedeschretiens.fr/

The article is below:

Posted by David Hamid at 11:30 0 comments
Email ThisBlogThis!Share to TwitterShare to FacebookShare to Pinterest