A safe and joyful Christmas to all!

This extraordinarily difficult year is drawing to a close, a year marked by much loneliness, despair, suffering and death, due to the pandemic. But we have learned some lessons, including valuing what we have hitherto taken for granted, and appreciating with new awareness so many of the simple gifts which God provides.

But the greatest gift is the one we celebrate in the Nativity of Our Lord. The great Jesuit theologian Karl Rahner summed it up:

"When we say it is Christmas, we mean that God has spoken into the world his last, his deepest, his most beautiful word in the incarnate Word, a word that can no longer be revoked because it is God's definitive deed, because it is God himself in the world. And this word means 'I love you, you, the world and humankind'.

So we celebrate God who is with us in the world, Emmanuel. Our response is a renewed love for all, and a new delight in the good things of this world which God provides for us.

To all the clergy and people of this Diocese in Europe, my thanks for your support and collaboration over this past year, and together with friends and readers of this blog I wish you a Christmas full of blessing. Wherever you are, I pray you will be able to celebrate this glorious feast safely and with joy.

Posted by David Hamid at 06:44 0 comments
Email ThisBlogThis!Share to TwitterShare to FacebookShare to Pinterest

Interfaith declaration on the sanctity and dignity of all, celebrated in Westminster Abbey 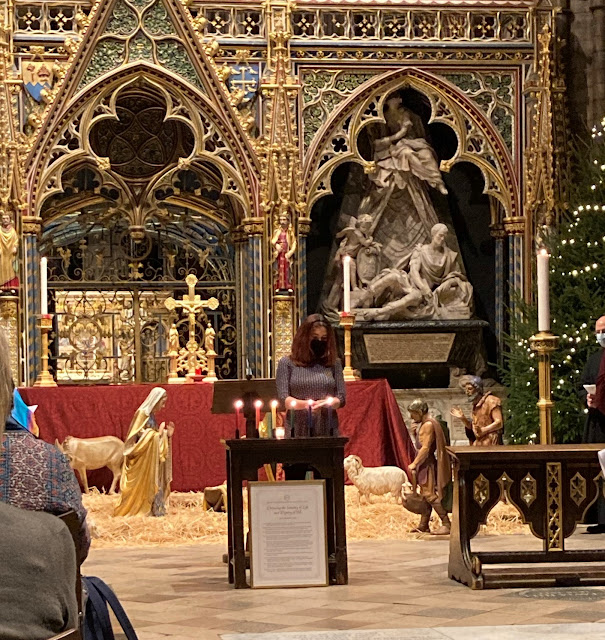 Last Wednesday, an important interfaith declaration was launched, with signatures from faith leaders from over 50 countries around the world, Christian, Muslim, Jewish, Hindu, Buddhist and Sikh.

The Declaration calls for an end to violence and criminalisation against LGBT+ people and for a global ban on conversion therapy. The Church of England's General Synod in 2018 supported such a ban, as being an unethical, potentially harmful practice with "no place in the modern world".

An interfaith service of prayer was held at Westminster Abbey to mark this important step. It was a dignified (and socially distanced) service, and perhaps fitting that the Abbey was already decorated for  Christmas, when Christians celebate the new life which was born into the world, calling us towards love for all our sisters and brothers. The service concluded at  the innocent victims memorial, just outside the West Door of the Abbey, a memorial to men, women and children who have suffered death, torture and oppression throughout the world. 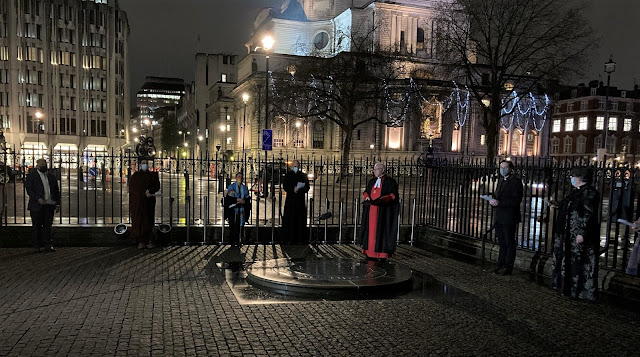 This is the interfaith text:

Declaring The Sanctity Of Life And The Dignity Of All

We come together as senior religious leaders, academics, and lay leaders from around the world to affirm the sanctity of life and dignity of all.

We affirm that all human beings of all sexual orientations, gender identities and gender expressions are a precious part of creation and are part of the natural order.

We, therefore, call for all to be treated equally under the law.

We recognize with sadness that certain religious teachings have often, throughout the ages, caused and continue to cause deep pain and offense to those who are lesbian, gay, bisexual, transgender, queer and intersex.

We acknowledge, with profound regret, that some of our teachings have created, and continue to create, oppressive systems that fuel intolerance, perpetuate injustice and result in violence. This has led, and continues to lead, to the rejection and alienation of many by their families, their religious groups and cultural communities.

We ask for forgiveness from those whose lives have been damaged and destroyed on the pretext of religious teaching.

We believe that love and compassion should be the basis of faith and that hatred can have no place in religion.

We call on all nations to put an end to criminalisation on the grounds of sexual orientation or gender identity, for violence against LGBT+ people to be condemned and for justice to be done on their behalf.

We call for all attempts to change, suppress or erase a person’s sexual orientation, gender identity or gender expression – commonly known as “conversion therapy” – to end, and for these harmful practices to be banned.

Finally, we call for an end to the perpetuation of prejudice and stigma and commit to work together to celebrate inclusivity and the extraordinary gift of our diversity

Information about the Declaration can be found here

Posted by David Hamid at 12:47 0 comments
Email ThisBlogThis!Share to TwitterShare to FacebookShare to Pinterest

Advent for us in the northern hemisphere is at the time of the shortest days of the year. In the midst of the Advent darkness we have today's Gaudete Sunday, the title taken from the ancient introit, "Rejoice (Gaudete) in the Lord always: again I say, rejoice. Indeed, the Lord is near". The hint of promised joy which will pierce our darkness is seen as we light the third candle on the Advent wreath, which is normally pink, and with rose vestments at the mass instead of the more sombre purple. Today's Gospel features the great Advent figure, St John the Baptist. The writer of the Fourth Gospel proclaims, "He came as a witness to testify to the light". 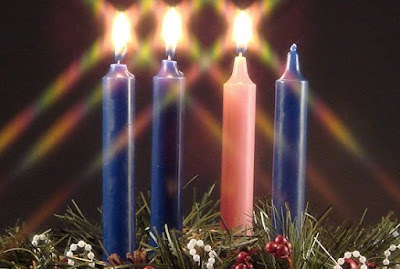 Last week on the agenda of the diocesan synod were some matters of justice: the care for God's creation and the renunciation of all forms of racism. We also were introduced to the Church of England-wide process, Living in Love and Faith, a comprehensive study of just about all aspects of human sexuality, but which also addresses matters of justice, as the dignity of all human beings regardless of sexuality, created in God's image and loved unconditionally by God, cannot be taken away.

Justice is at the heart of our calling as disciples; the followers of Jesus Christ, living lives in pursuit of justice, is how we help to bring light into a darkened world. For that reason, I am grateful for the alternative collect for this Sunday:

God for whom we watch and wait, you sent John the Baptist to prepare the way of your Son: give us courage to speak the truth, to hunger for justice, and to suffer for the cause of right, with Jesus Christ our Lord.

I think I am correct that our congregation in Varese, in Northern Italy, is the only congregation in the diocese whose patron is the herald of justice, St John the Baptist. My last visit there was in the middle of October, squeezed in between two lockdowns. It is a community where both light and joy can be felt and where the candidates for confirmation were ready to take the light of Christ's justice into the world.

Posted by David Hamid at 14:36 0 comments
Email ThisBlogThis!Share to TwitterShare to FacebookShare to Pinterest