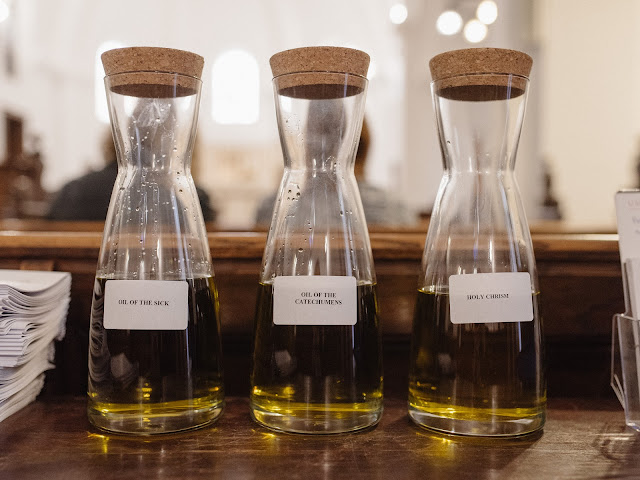 Blest by the sun, the olive tree
brought clusters of fair fruit to birth
whose ripeness now we bring with prayer,
Lord Christ, redeemer of the earth.

This rite of blessing is at the heart of the chrism mass (indeed gives the service its name) and is the most ancient part of this liturgy. Since ancient times bishops gathered with their clergy during Holy Week to bless the oils which would be needed for those to be initiated into the Christian faith at Easter. Today, the priests still join with the bishop in the solemn prayer over the Chrism, recalling our unity in the priestly office. 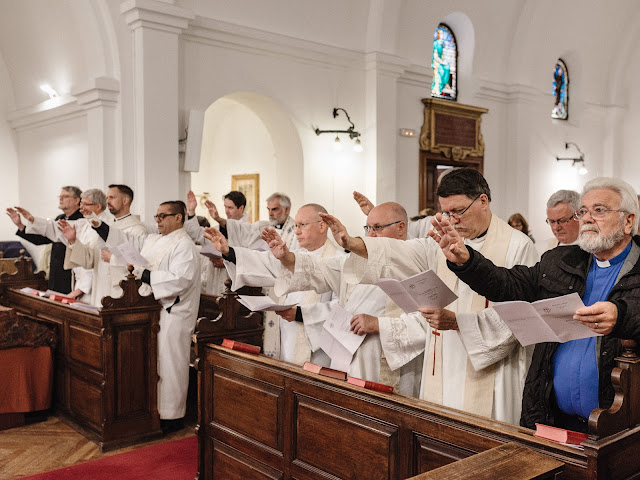 The public renewal of vows of ordination (and commitment to lay ministry) is a more recent innovation, but one which has grown to be highly valued among deacons, priests, bishops and lay ministers of the Church. It is a time when our collegiality and solidarity is expressed, and our unity in leading the people of God in a common mission. 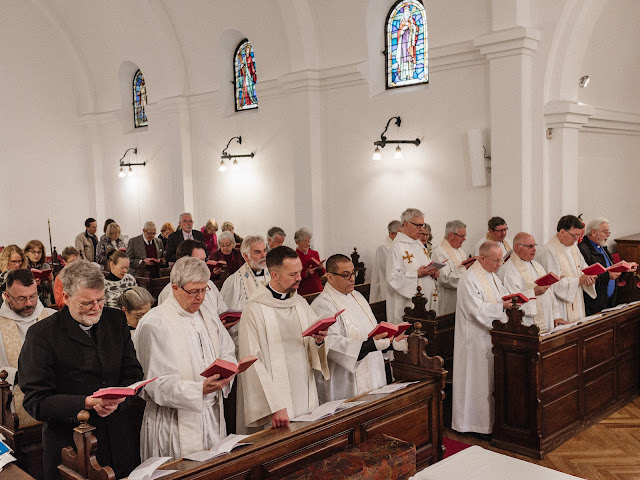 Ministry is generally joyful work but it is also a lonely calling, perhaps even more so in this scattered diocese. To gather at times such as at the chrism mass is vitally important. It is an opportunity to build up our friendship and community. It is also an important time for me to thank the clergy and Readers, for their diligent and faithful service throughout the year. It was moving for me to hear from one of the priests who has recently moved into this diocese that, despite the distances, he feels genuine warmth and true collegiality among his brother and sister clergy. 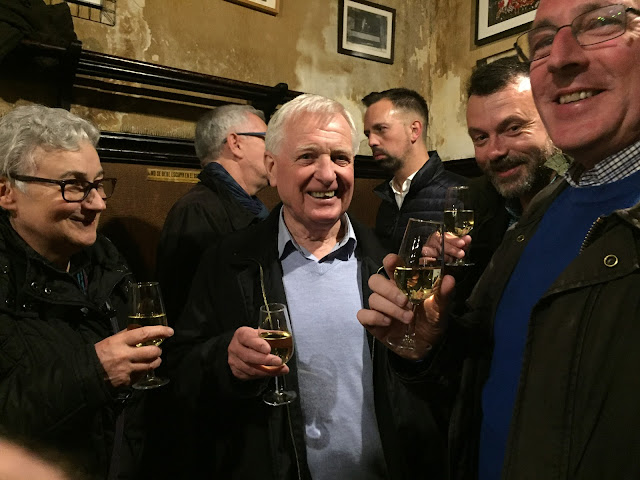 It was a privilege to preside at this service in St George's Madrid this past Tuesday in Holy Week. Altogether about 20 priests from around the Gibraltar archdeaconry gathered for the liturgy. The welcome provided by Canon Paul Ormrod, and Reader Celia Paterson, at St George's was very warm indeed.

At the same time, Bishop Robert presided at a similar service in Brussels and on Wednesday in Paris. 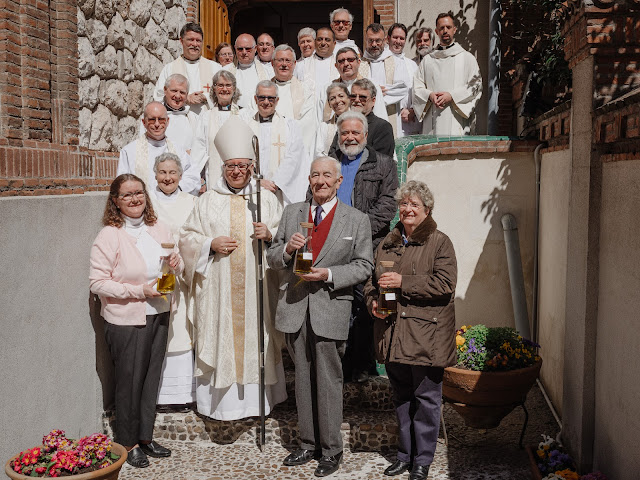 After the service Deacon Frances and Reader Celia Paterson busied themselves decanting the blessed oils into containers for the clergy to take with them to their home communities, while the rest of us enjoyed a splendid lunch provided by the parishioners of St George's, on the Church patio, where we, like the olives were blessed by the sun. 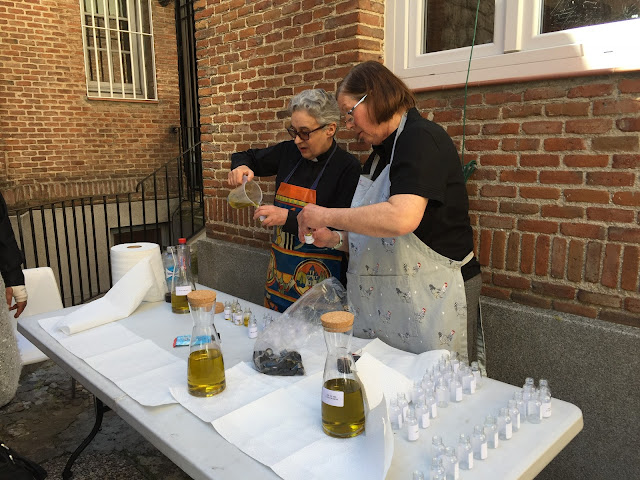 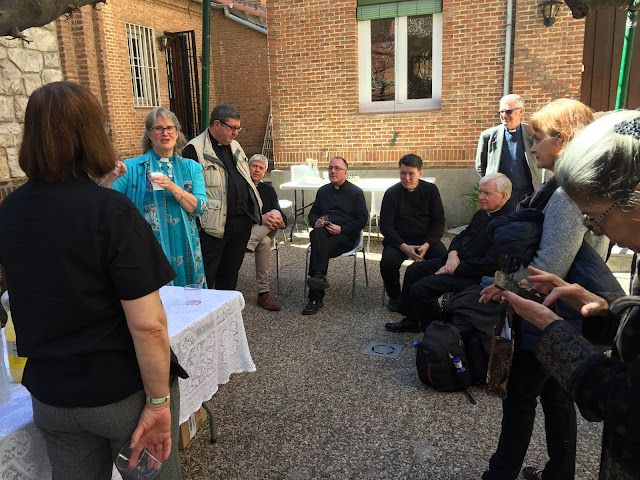 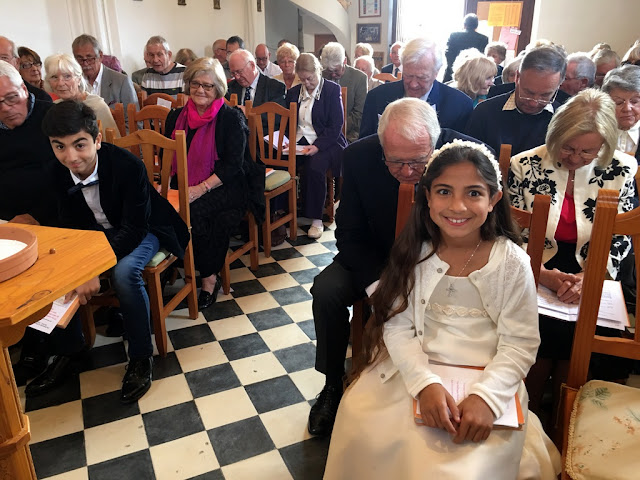 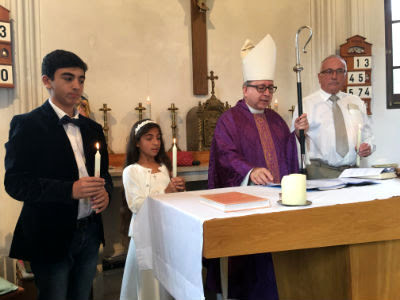 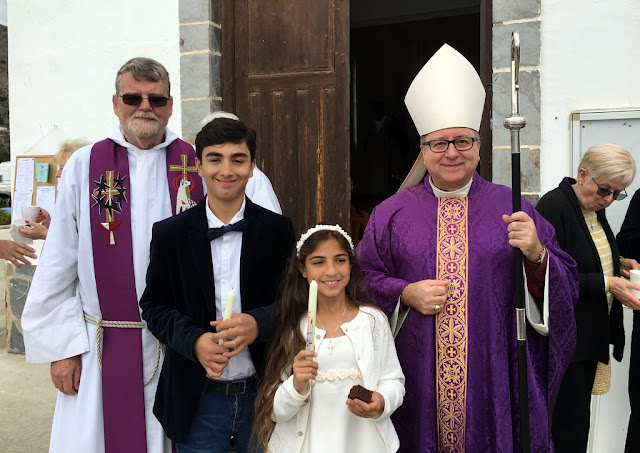 Posted by David Hamid at 23:34 0 comments
Email ThisBlogThis!Share to TwitterShare to FacebookShare to Pinterest 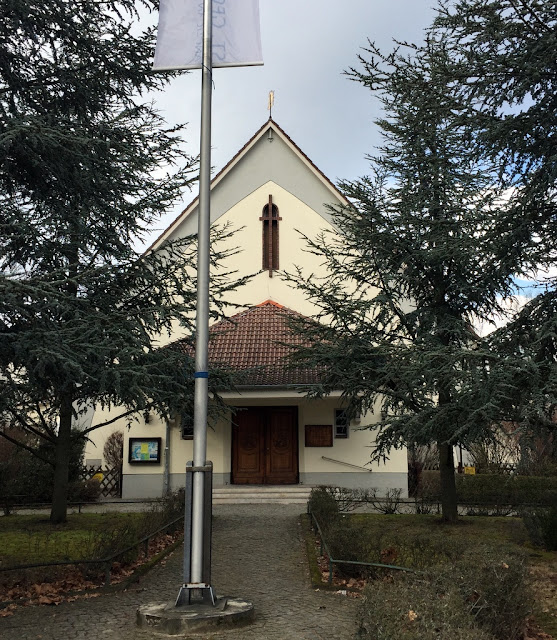 Anglican congregations in Germany can be traced back over 400 years. Originally comprised of migrants from England, the congregations now include people of many nations, languages, and even Christian backgrounds. Today some of the Anglican Churches in Germany are part of the Church of England's Diocese in Europe, while others belong to the Convocation of Episcopal Churches in Europe (part of the Episcopal Church, USA). The Council of Anglican and Episcopal Churches in Germany (CAECG) is a body bringing together the congregations of the two jurisdictions, for prayer, worship, to take counsel together and to plan joint activities. CAECG is thus a unique body in the Anglican Communion and a provides a creative forum for our churches from distinct Anglican Provinces to celebrate their shared heritage and forge a common life and mission in Germany.

Two meetings are held each year, one more "business" orientated and one more educational. This March's sessions were of the "business" type, and included a robust discussion, among the clergy in particular, regarding the Common Fund increases for 2018 and 2019. Some work was done in small groups setting out a plan for some learning and exploration as a synod over the next years. This will include looking at issues of communications, ministry among youth and young adults and harnessing the gifts and insights of the rich inter-generational make-up of the German parishes. 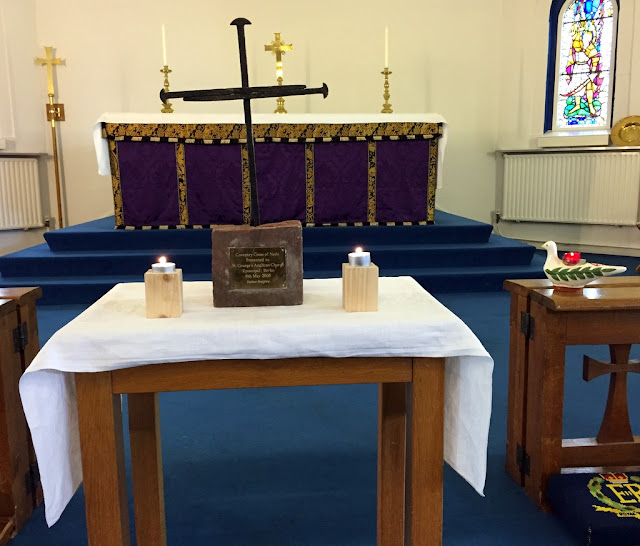 The Revd Canon Christopher Jage Bowler, Chaplain of St George's Berlin, is the current clergy coordinator of CAECG. The recent sessions were hosted at his Church in Berlin, where among the parish priorities are weekly prayers for peace and reconciliation around the famous Coventry Cross of Nails. 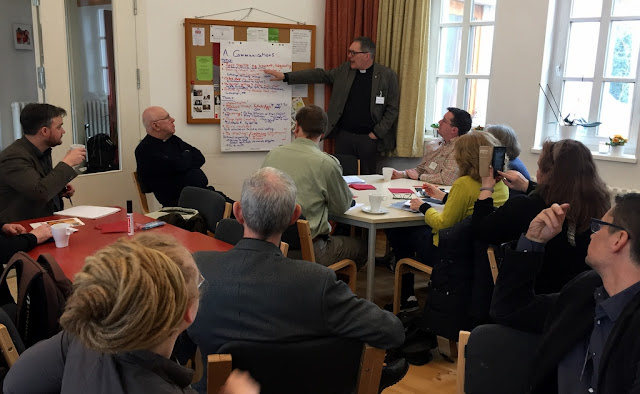 A special guest, Professor Dr Andreas Krebs of the Old Catholic Seminary in Bonn, gave a very stimulating paper on the challenge of modern secularism for our Churches, as well as brought greetings from our Old Catholic sister Church.

At the closing eucharist of CAECG the Revd Joachim Reich was received into the communion of the Church of England. Fr Joachim was ordained in the Roman Catholic Church. His reception is an essential first step towards the full exercise of priestly ministry within an Anglican context. At the mass there was a warm feeling of welcome shared with Fr Joachim as he entered his new ecclesial home as a priest. 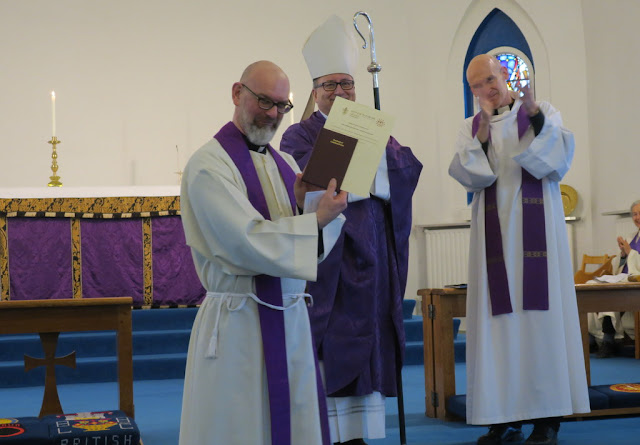 Bringing greetings to the new Bishop of Gothenburg 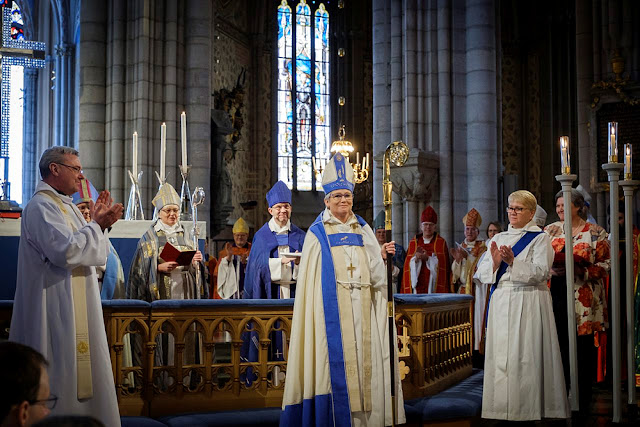 On 4 March in the ancient cathedral in Uppsala, I represented the Church of England at the consecration of Susanne Rappmann to be the next bishop of Gothenburg. I was able to extend greetings not only from the Church of England as a Porvoo partner church, but also from our own parish of St Andrew in Gothenburg, which has worked closely with the Swedish diocese over the years, especially in student ministry.

Bishop Susanne was consecrated in a solemn yet joyful service by the Archbishop of Uppsala, the Most Revd Antje Jackelén, who was assisted by several Swedish bishops, the Bishop of Moray, Ross and Caithness of the Scottish Episcopal Church, the Bishop of Iceland, the Bishop of Berlin-Brandenburg.and Bishop Absalom Mnisi of Swaziland. Bishop Absalom's diocese is twinned with Gothenburg, and it was good to have a time to catch up with him and with the Dean of Gothenburg Cathedral, Karin Burstrand, a strong supporter of our Anglican parish in that city.

Consecrations in the Church of Sweden are very similar to those in the Church of England, and are always set in the context of the högmässa, or High Mass of the Church. Besides a colourful array of bishops, many ecumenical guests were present, from the Roman Catholic Church, the Coptic and Syrian Orthodox, the Salvation Army and other free churches. 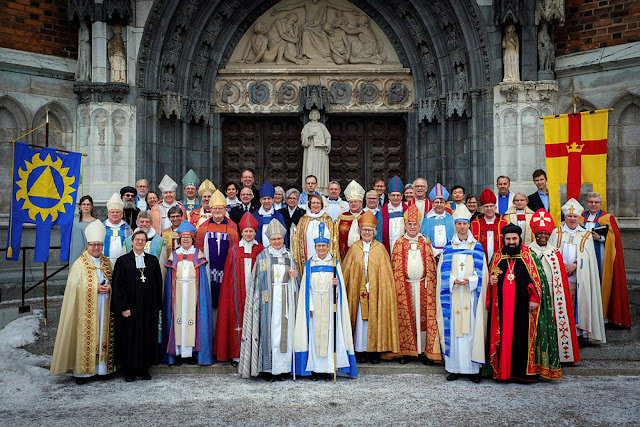 Bishop Suzanne has chosen as her motto, Vår Gud bär sår which I think means "Our God bears wounds". She says this motto reminds us of our calling to bear the wounds of others, and like Christ our God who bore the wounds of the cross but who rose again, to spread hope in the world. 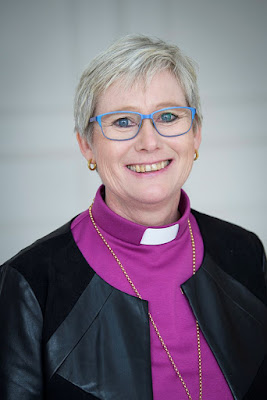 Posted by David Hamid at 11:16 0 comments
Email ThisBlogThis!Share to TwitterShare to FacebookShare to Pinterest

The Anglican Chaplaincy of St Andrew on the Costa del Sol East has just celebrated 50 years of life and witness. From humble beginnings in 1968, meeting in people's houses, the Chaplaincy now has a full-time priest, its own building and chaplaincy centre in Fuengirola, and 3 other worship centres in Roman Catholic Churches in Benalmádena, Calahonda and Alhaurín El Grande. The Revd Alaric Lewis, the current Chaplain, is assisted by a Reader Caroline Macfarlane and a Church Army Captain, John LePage.

Whilst firmly in the Anglican tradition, the Chaplaincy, (which has as its patron St Andrew), seeks to be a spiritual home for English-speaking Christians from all backgrounds. Most of the members are British in origin and many of them retirees. Nevertheless, Fr Alaric has initiated an occasional programme for children - "The Mustard Seed Gang". In addition to daily worship and the Sunday eucharists in the various centres, other parish activities include study groups, retreats, and numerous social activities. One such activity, a special afternoon tea, was part of the golden jubilee festivities. My recent visit on 24-25 February for the 50th anniversary included the confirmation of one of the members. 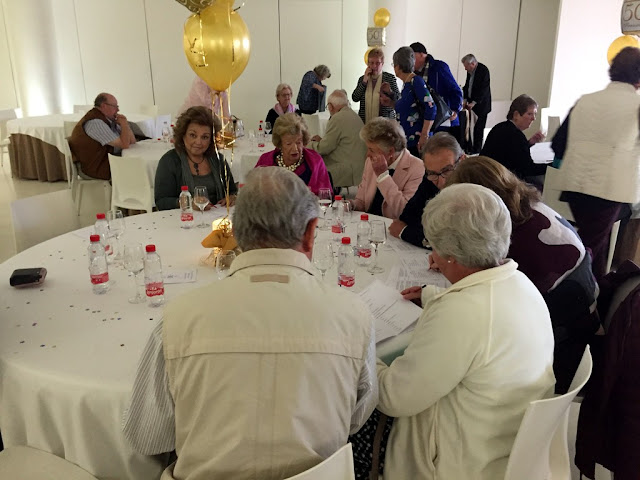 Fr Alaric, unfortunately for us in the Diocese and for parishioners in the parish of Costa del Sol East, is moving on and taking up a new post in the Diocese in Norwich at the end of this month. Speaking of the anniversary, he said,  "God has truly blessed us with so much, and today’s celebration was the perfect way to give thanks. Praise God for fifty years of prayer and service in his name, and prayers for the years to come. May we all continue to grow in love for Him and for one another".

Posted by David Hamid at 16:22 0 comments
Email ThisBlogThis!Share to TwitterShare to FacebookShare to Pinterest