Dr Clare Amos, the Diocesan Director of Lay Discipleship, has written a wonderful reflection on the forthcoming feast of All Saints. She reflects on "the intrincally paradoxical nature of our faith":

All Saints Day is actually the celebration of the ridiculous paradox that WE are ‘all saints’, at least potentially, even if honesty forces us to admit that it doesn’t always seem like that in the present. In fact if we (mistakenly) put our focus on ‘All Saints Day’ on the great and traditional saints of the church’s history – we miss the meaning of the Feast.

Clare also draws on the Syriac tradition in the Christian Church, which has significan roots in the far south east of this Diocese in Europe.

You can find the full article on the Faith in Europe blog which can be found here:  https://faithineurope.net/

The Faith in Europe blog is but one part of Clare's work, and is valuable for all preachers and others who wish to reflect, week by week, on the lectionary readings, from a European perspective.

Posted by David Hamid at 13:22 0 comments
Email ThisBlogThis!Share to TwitterShare to FacebookShare to Pinterest 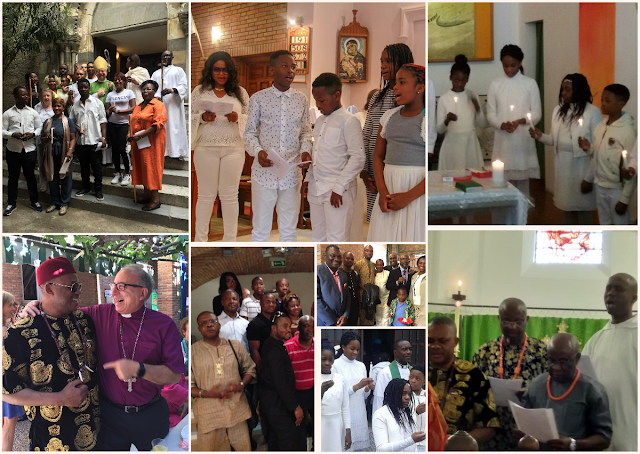 One of the joys of life in the Diocese in Europe is its multicultural make-up. In this great mosaic of peoples, Nigerian Anglicans are among the largest groups of members. They are also among the most joyful in their faith.

These are worrying days for the Nigerians in Europe. Events in their homeland are alarming and many are worried for the safety of family and friends. Yesterday, Bishop Robert and I sent a letter to our clergy and to the Nigerian members of our diocese, to unite us in prayer for their troubled country.

Here is the letter: 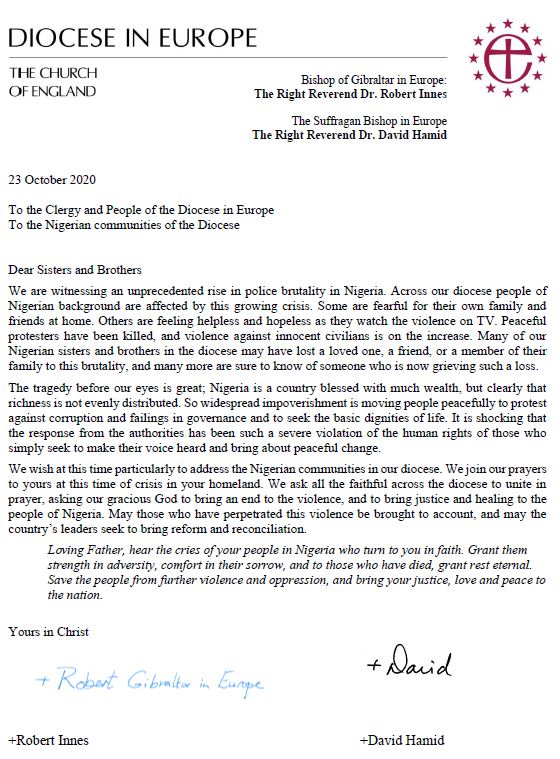 Posted by David Hamid at 08:38 0 comments
Email ThisBlogThis!Share to TwitterShare to FacebookShare to Pinterest 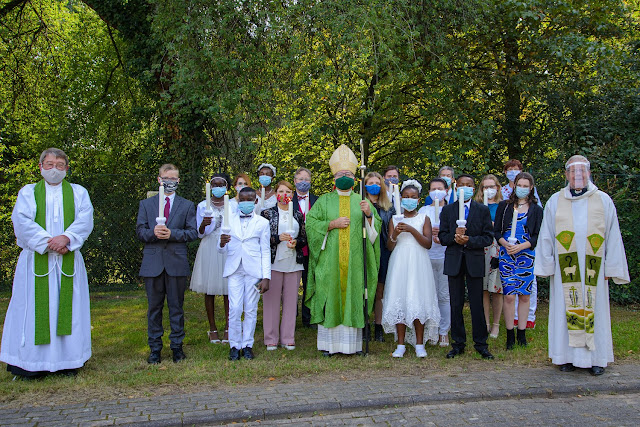 One of the few country travel corridors still open to a London resident like me, where quarantine is not needed upon entry or return, is Germany. So on 12 September, a confirmation service, delayed from last May was finally able to be celebrated in All Saints Cologne.

With 16 candidates it was one of the largest confirmations held in the parish since the mid 1960s. It was necessary, by German regulations, to restrict the numbers in church for the mass, which meant that besides the candidates, only close family members could attend, which was a disappointment for so many in the chaplaincy of Bonn and Cologne who would have wanted to be present.

Nevertheless, it was a wonderful celebration. But a few modifications were required to keep everyone as safe as possible: 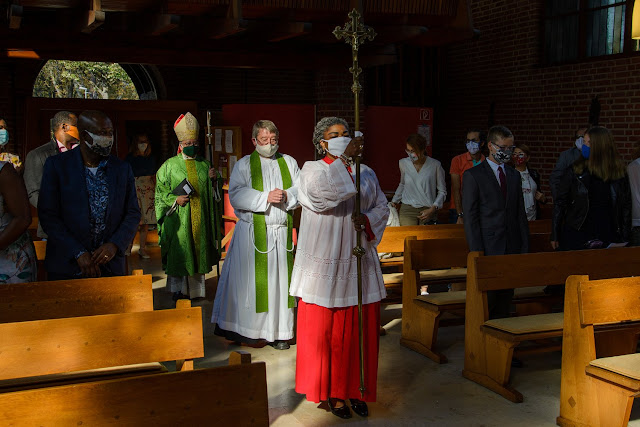 The congregation and ministers were masked, except for presidential prayers and preaching, when there was ample physical distancing. 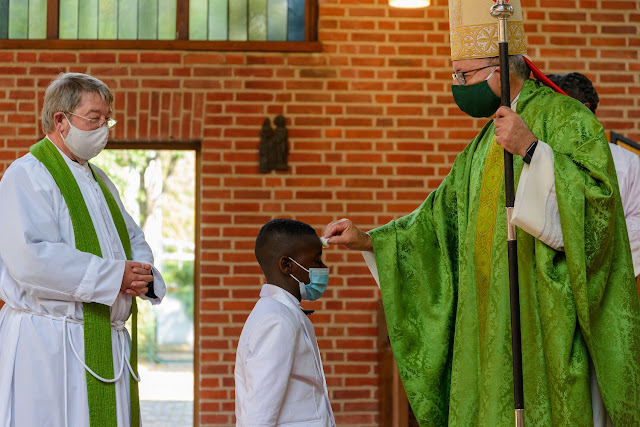 Cotton wool, changed for each candidate, was used for the anointing with Holy Chrism. Doors to the outside kept open to permit the circulation of fresh air. 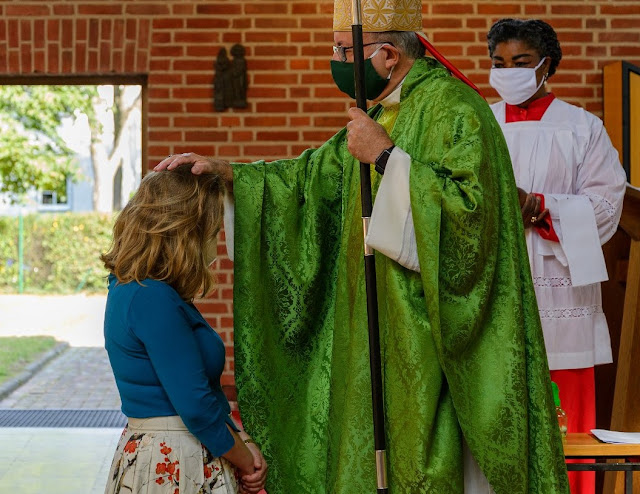 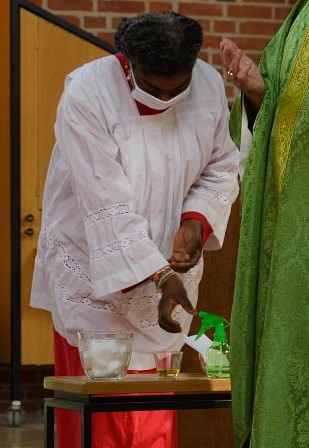 The laying on of the bishop's hand is an essential part of the sacrament of confirmation, so an acolyte well rehearsed in managing sanitizing spray for my hand betwen each candidate was absolutely essential. Probably not something covered in the usual servers' training manuals! 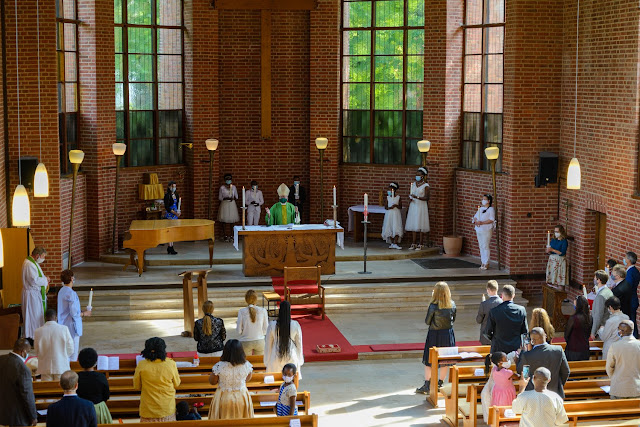 Movement in the liturgy was kept to a minimum, with family groups allowed to move together for the giving of the candles, for instance, keeping a good distance between them and other individuals or groups. 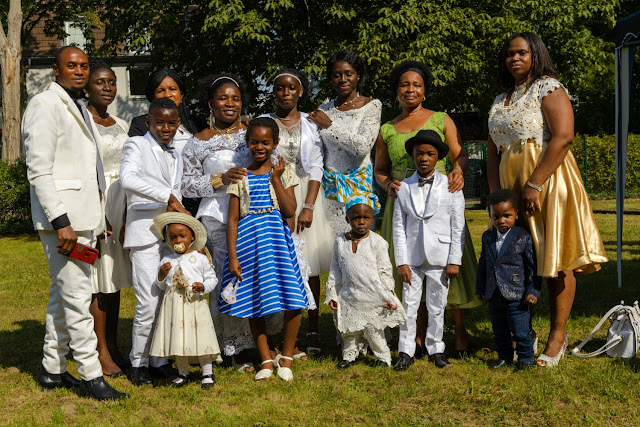 The reception was in the open air, again with family groups kept together and distanced from other groups and individuals.

Of course we missed some of the usual features of a confirmation service: a packed church, congregational singing, the procession to the font, the sprinkling with water, and the reception of Holy Communion under both kinds, but even in these troubling times, with due care, the celebration of faith continues in God's holy Church.

May God grant continued protection to the candidates and guide their steps in their life in Christ.

Posted by David Hamid at 10:25 0 comments
Email ThisBlogThis!Share to TwitterShare to FacebookShare to Pinterest 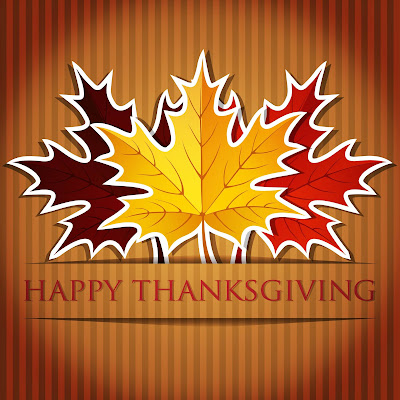 Happy Thanksgiving to all Canadians in the Diocese in Europe, and to Canadian friends and relatives everywhere!
As Canadians come together with grateful hearts for all the blessings we have received, let us pray for the needs of our world, especially for all those who are victims of war, abuse, racial injustice, alienation and disease. May the strength of our prayers open up avenues of healing, comfort and radical changes in the systems that keep people oppressed.

If the only prayer you said was thank you, that would be enough - Meister Eckhart 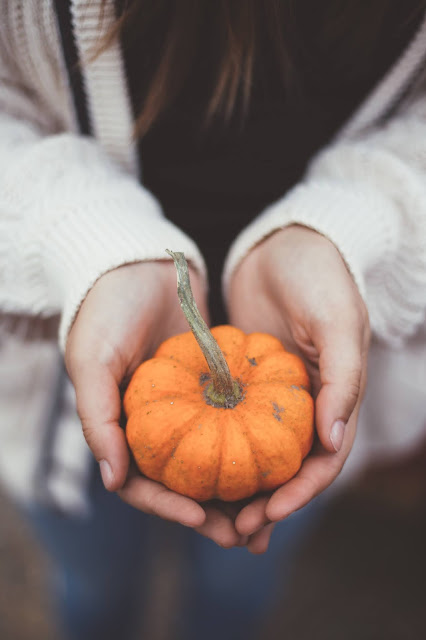 Photo by Ryan Christodoulou on Unsplash

Posted by David Hamid at 11:56 0 comments
Email ThisBlogThis!Share to TwitterShare to FacebookShare to Pinterest 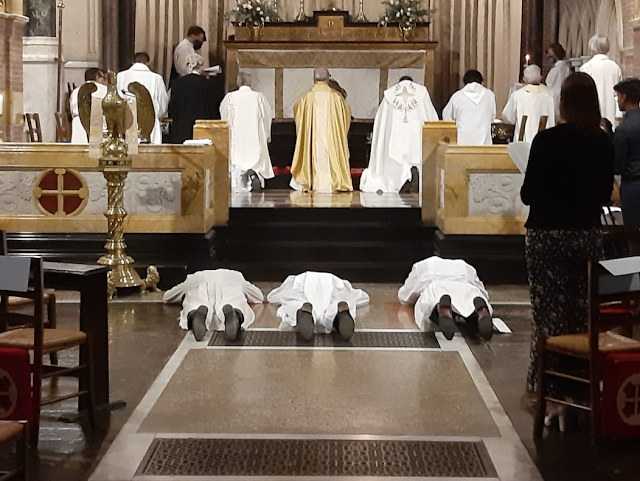 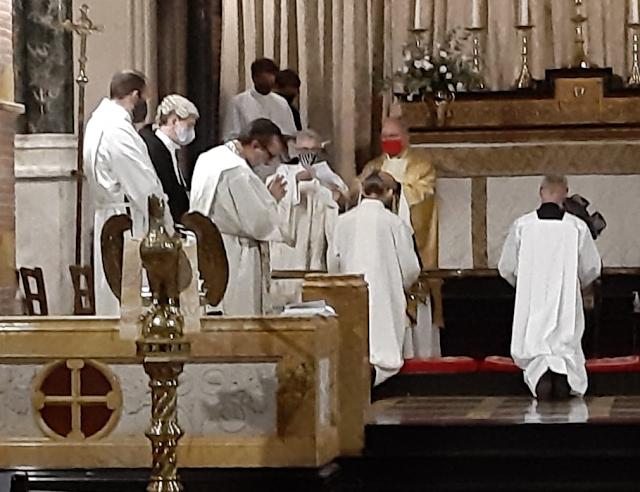 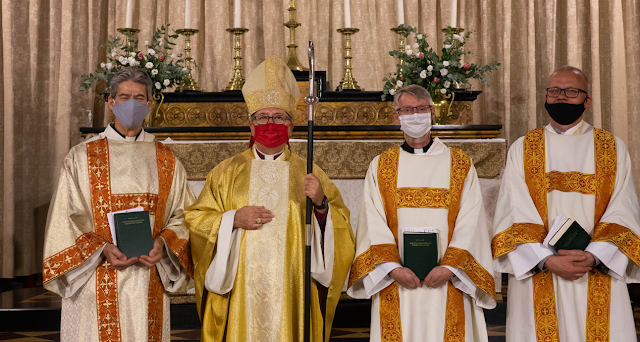 Photos courtesy of Chaja Verkerk
The service was recorded on Facebook: https://www.facebook.com/allsaintschurchrome/videos/1182436905474467/
Posted by David Hamid at 10:04 0 comments
Email ThisBlogThis!Share to TwitterShare to FacebookShare to Pinterest