Foundation stones of the St John the Evangelist Development Project were laid last Wednesday 17 May in Casablanca. It was a joyful international gathering convened by the Revd Canon Dr Medhat Sabry, the Chaplain of St John's. 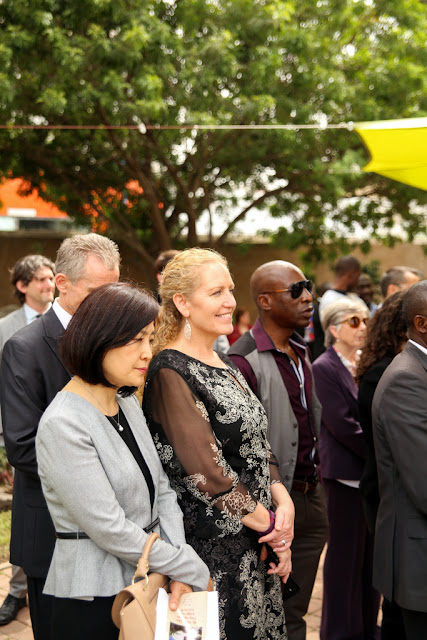 The Church has been serving the English-speaking expatriate Christian community in the city since 1906. The time has come to expand the facilities in the Church compound, including a renovation of the Church itself, and the construction of rooms for community and educational use. As St John's is part of the historic architectural patrimony of the city, some complicated permissions and approvals had to be obtained from several government departments.

His Excellency, Khalid Safir, the Wali of Casablanca and Settat, has been very supportive of the project and we were honoured by his presence at the ceremony on the 17th. (The Wali is the representative of the King, in an administrative region of Morocco). 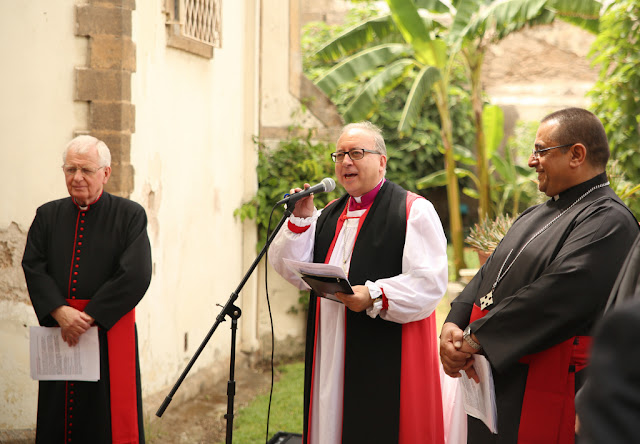 His Excellency joined me and several others - Archdeacon Geoff Johnston, UK Consul Mr David Harries, US Chargé d'Affairs, Mrs Stephanie Miley, and Churchwardens John Peterson and Angie Bermudez - in laying the ceremonial stones. The Wali spoke of the important place St John's has within the diverse, international, multicultural city of Casablanca. The support we have received from the Moroccan authorities has been very encouraging, and we are thankful for His Majesty King Mohammed VI's commitment to helping foreign religious communities such as ours, flourish in his country.

Members of St John's, who themselves come from around the world were in attendance, as were representatives of St Andrew's Tangiers, the other historic Church of England congregation in the country.

One of the interesting pieces of St John's history is that US General George S. Paton regularly attended services during WWII. The General, in fact, donated the oak pulpit to the Church in memory of troops who died in the defence of the city.


This whole development project is a result of the vision of the Chaplain, Fr Medhat. It was fitting and joyful coincidence that the foundation stone ceremony was on the eve of the 30th anniversary of his ordination as a priest. The Diocese is supporting the project through last year's Advent Appeal. 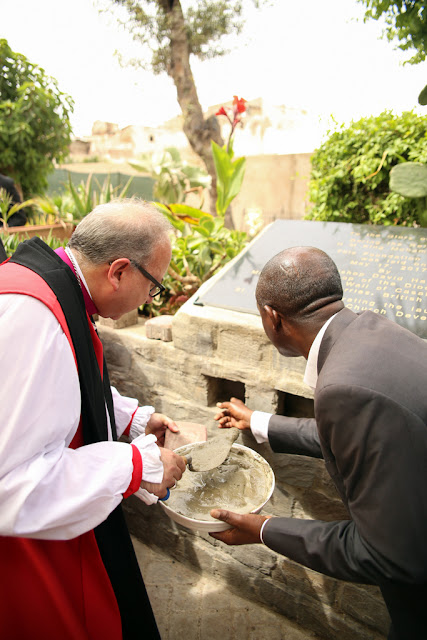 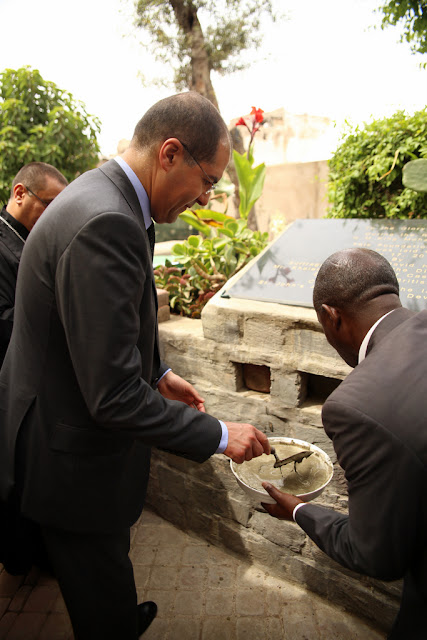 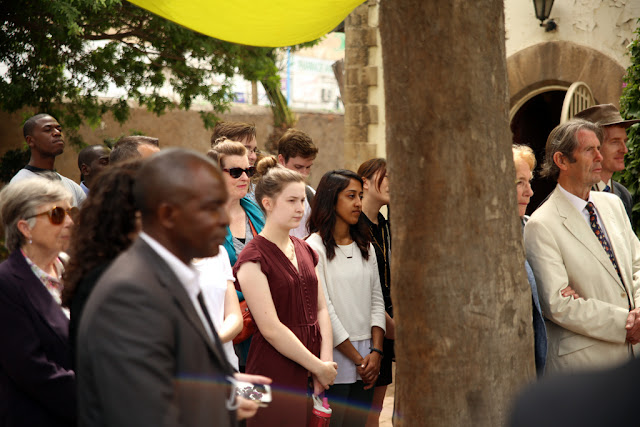 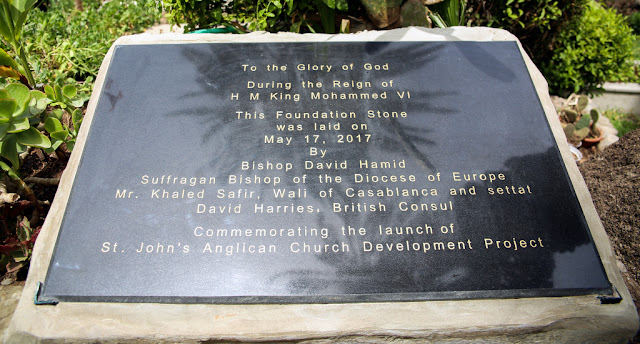 Posted by David Hamid at 07:08 0 comments
Email ThisBlogThis!Share to TwitterShare to FacebookShare to Pinterest

All newly ordained clergy or curates in the Church of England must complete what is known as IME 4 - 7, a period of 3 - 4 years when further training is given. This is also known as Post Ordination Training or POT. The Revd Canon Ulla Monberg, the Diocesan Director of Ministerial Development, is the staff person responsible for our own IME 4 - 7 programme in this Diocese in Europe.

Our curates recently participated in a POT seminar focussing on the Church's liturgy. At the end of the years of curacy our priests and deacons are required to demonstrate solid rootedness in the liturgical traditions and practices of the Church of England, and to use their gifts and abilities in leading public worship in a variety of settings. In addition the curates are to show an understanding of the insights and practices of the liturgies and traditions of ecumenical partners.

Canon Monberg was assisted in this recent IME session by the Revd Canon William Gulliford, the Director of Ordinands; the Revd Dr Ben Gordon-Taylor, our Diocesan Liturgical Advisor and Dean of Chapel and Lecturer in Liturgy at the College of the Resurrection, Mirfield;  the Revd Canon Dr Julie Gittoes, a residentiary canon at Guildford Cathedral; and the Revd Steve Beak, a parish priest who teaches worship for curates in the Guildford Diocese and for the Arrow Leadership Course.

Practical liturgical skills were shared at the seminar, such as how to conduct weddings. Fr William "presided" at a typical marriage service, with model bride and groom the Revds April Almaas and Mike Waltner, (Canon Monberg was a bridesmaid!) 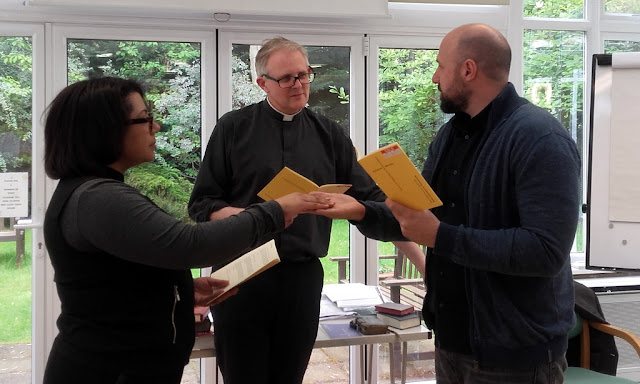 On the Sunday the IME group was warmly welcomed from the pulpit of Guildford Cathedral where they attended the Eucharist. Our current curates are serving in Paris, Aquitaine, Vienna, Trondheim, Athens and Istanbul.

Posted by David Hamid at 22:26 0 comments
Email ThisBlogThis!Share to TwitterShare to FacebookShare to Pinterest 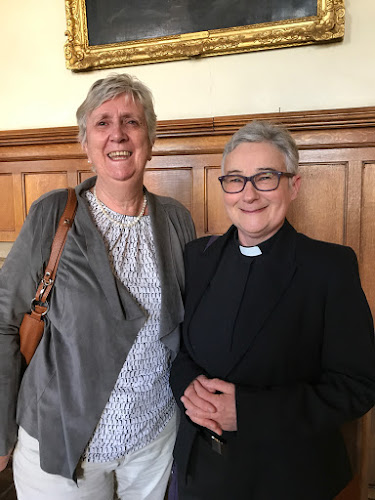 The Nikaean Club was established at the 1600 anniversary of the Council of Nicaea, in 1925. It exists primarily to support the ecumenical ministry of the Archbishop of Canterbury. Its members offer hospitality on behalf of the Archbishop to representatives of other Churches who visit Lambeth Palace or other institutions of the Church of England. It also gives small grants to assist theological students from ecumenical partner Churches who are studying in England.

The Club’s affairs are managed by an Executive Committee and at the recent Annual General Meeting of the Club, two of its members from the Diocese in Europe were elected to the executive, Lay Canon Ann Turner from St Boniface, Antwerp and Deacon Frances Hiller from my office. The 400 members clearly appreciate the ecumenical work of our diocese and her members, and thus have chosen Ann and Frances to help in the governance of this venerable ecumenical Club.

Posted with Blogsy
Posted by David Hamid at 17:20 0 comments
Email ThisBlogThis!Share to TwitterShare to FacebookShare to Pinterest 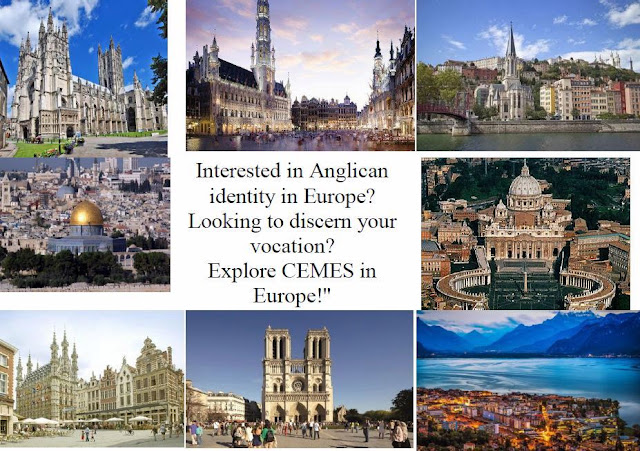 Are you under the age of 30? Are you interested in exploring a possible vocation to ministry in the Church of England? If so, there are still a couple of places left for participants in the CEMES programme for 2017-2018 in the Diocese in Europe.


The CEMES programme in the Diocese in Europe consists of three basic elements:


In the Diocese in Europe CEMES scheme participants will:


If you are a young adult, under the age of 30, and are interested in exploring a possible vocation to ministry in the Church of England, come and see how the C of E lives, prays, thinks and talks... abroad!

Posted by David Hamid at 07:09 0 comments
Email ThisBlogThis!Share to TwitterShare to FacebookShare to Pinterest