The sound of the conch being blown, ancient pre Columbian languages, mariachi and tightrope - all part of a Mexican consecration

In the Church of England, the Archbishop (of York or Canterbury) when consecrating a new bishop lays out the duties of a bishop including "joining together in the ordination of bishops". Participating in the ordination of new bishops takes place, for me, most frequently in the Church of England. However, I was asked recently to be a co-consecrator for a new bishop in Mexico, and to preach at the consecration mass. It was a great privilege to do so, as the new bishop was an old friend, Fr Julio César Martin Trejo, now the Coadjutor Bishop of South East Mexico. 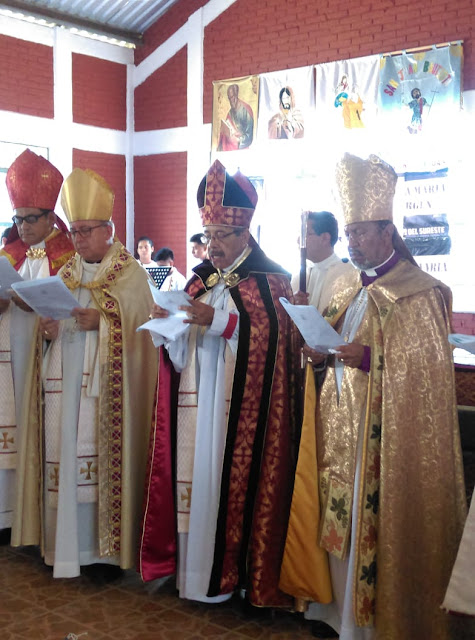 I have known Fr (now Bishop) Julio for 30 years. He was still in seminary when we first met. The consecration was in the Anglican Centre in Tuxtepec, in Oaxaca state. (The diocesan centre is in Xalapa, while the largest city in the diocese is Veracruz). Bishops from Mexico, the USA and Spain were present for the service on St Matthew's day, as well as clergy and laity from across the diocese, other Mexican dioceses and beyond. The Primate of Mexico, the Most Revd Francisco Moreno, presided.


It was a joyful and colourful occasion, with the liturgy (and preaching) in Spanish, readings and prayers in Zapateco, Maya and Chinanteco. The mass began with the solemn sound of the caracol  - a large conch-like shell - a pre-Columbian tradition marking a sacred event. The congregation included many more young persons than would be seen in England.

Tuxtepec has a very hot and humid microclimate. It was the sweatiest service (of about 2 1/2 hours length) I have been at for quite some time!


Bishop Julio faces many challenges. The faithful of South East Mexico are majority indigenous people and a number of distinct indigenous languages are spoken. Many are not able to understand Spanish well. The people are economically poor, but rich in their faith and in their cultural traditions. There are also many migrants moving through from countries to the south such as Guatemala, Honduras and El Salvador, most of whom are heading for the USA. The communities of the diocese are scattered over large distances, and transportation is not always readily available and roads are not always smooth.


Following the service a banquet was offered by the laity of one of the communities of the diocese. This included some features are not seen in Church of England consecrations: a mariachi band to accompany the eating and drinking, for instance. Also a youth group performed afterwards for the new bishop, including a demonstration of tightrope acrobatics. Now this, I thought, ought to be part of the C of E ceremony - a tightrope act is particularly apt symbol of episcopal ministry! 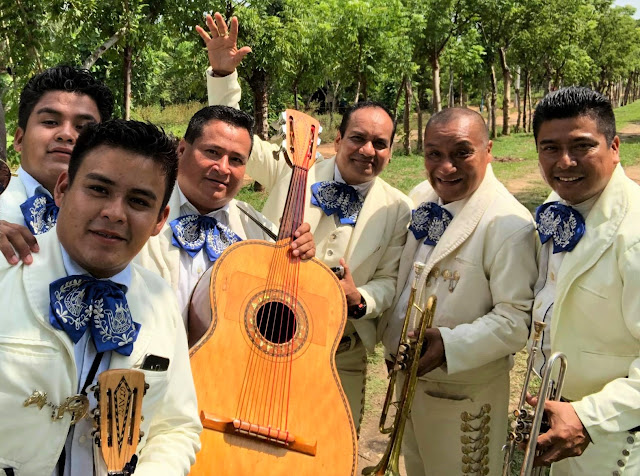 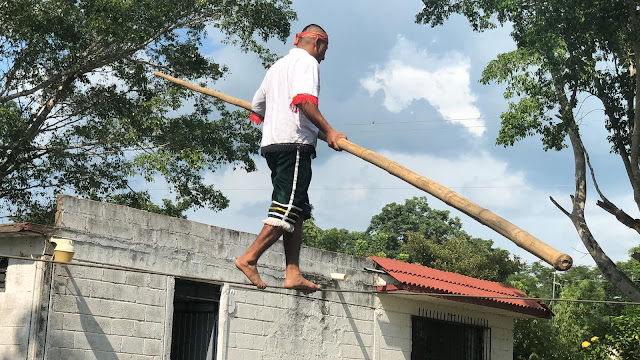 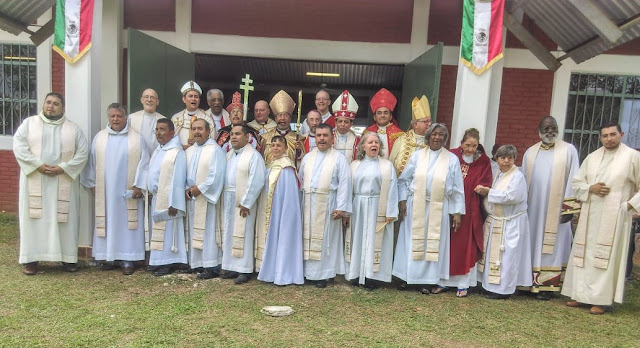 Posted by David Hamid at 11:44 0 comments
Email ThisBlogThis!Share to TwitterShare to FacebookShare to Pinterest

MES interns will explore Anglican Identity over the next 9 months

Dr Clare Amos, the Diocesan Director of Discipleship, also directs the MES programme of the diocese (the Ministry Experience Scheme, formerly known as CEMES, the Church of England Ministry Experience Scheme). We have 5 interns on placement for this academic year, in Brussels, Vienna, Copenhagen, Rome and Warnham Sussex (the intern is from Heidelberg). Together with their supporting advisors and mentors, Clare brought the interns to Rome recently for their official orientation to the programme.

The orientation in Rome included a visit to the PCPCU, the Vatican's Pontifical Council for Promoting Christian Unity, where Bishop Brian Farrell, the Secretary of the Council met with the interns and their advisors.

In terms of the theological areas to be explored over the next 9 months, Dr Amos has decided that given the context of the Diocese in Europe, and the varied nature and backgrounds of the candidates, to focus on the issue of Anglican identity. Clare says, "Apart from being valuable in itself, it would be beneficial to any interns going forward eventually on the ordination process, where the ‘Why are you an Anglican?’ question is likely to be asked of some of them".


The ‘Signposts statement’ which was developed by a working group in the Anglican Communion about 10 years ago, suggests four elements of the ‘The Anglican Way’ which will figure in the theological programme:

A video has been produced by the Revd Dr Robert Kinney and Mr George O'Mahony to introduce the interns to the diocese and to let them share some of their hopes for their participation in the scheme. It is here:


Posted by David Hamid at 19:21 0 comments
Email ThisBlogThis!Share to TwitterShare to FacebookShare to Pinterest

Nordic/Baltic Deanery could be the Church of England's most diverse

The clergy from the Nordic/Baltic Deanery were recently hosted and indeed inspired by one of Area Dean Nick Howe's close colleagues in the Church of Sweden Stockholm Cathedral. The Revd Ulf Lindgren, the Canon Precentor of the Cathedral, gave a fascinating historical tour of this church where the Reformation in Sweden actually began. It was here that the first mass in Swedish was celebrated. It continues to be the venue for national events, royal weddings and funerals, and interestingly, even after formal disestablishment of the Church of Sweden, the official service to open Parliament. The Cathedral has many features that are more Mediterranean than Baltic, such as a beautiful collection of Bernini Angels! Fr Ulf also led the clergy in some biblical reflections, picking up some fascinating insights from the Old Testament that were new to us all.

The clergy chapter strikes me as being an essential event for our scattered priests who can feel very isolated in their ministry. Fr Bjarni, for instance, in Reykjavik, is a three hour flight from his nearest neighbouring Anglican priest. Living and working in countries in the region pose some distinct challenges too, as labour laws, issues of contracts and working hours, (even working hours for clergy!), can seem often at odds with the terms and conditions of our Church of England priests. Throw into that mix some of the expectations of some of the laity and you have a very challenging set of circumstances indeed. There was a strong sense of solidarity and mutual support among the clergy as they face these challenges in their localities.

The Nordic / Baltic Synod is likely the most culturally diverse of all our synods. Even the clergy who originate from England are in a very tiny minority as is revealed in the photo above.

The clergy were joined by the laity for the annual Deanery Synod. The sessions were held at the Church of St Peter and St Sigfrid in Stockholm, again with Fr Nick Howe convening and presiding as Area Dean. Always faithful to their calling as "servants of the servants of God" Nick organised the clergy into a team to cook and serve a festive Swedish meal for the lay delegates to synod.

Andrew Caspari, the new Diocesan Secretary/Chief Operating Officer was able to introduce himself to the Deanery on this his first visit. We hope it was not too stressful, even though he has the unenviable but essential task of interpreting much of what happens at the level of the diocese, including safeguarding and financial matters, always of concern to synod members. He has already endeared himself to many nevertheless, through his love of (and generous sharing of) ice cream.

The synod closed with the members joining the congregation at the Church of St Peter and St Sigfrid for the Sunday mass. The congregation, like many in our diocese, is observing the Season of Creation and the service focussed on our Christian calling as stewards of God's creation and especially planet Earth.

Posted by David Hamid at 17:50 0 comments
Email ThisBlogThis!Share to TwitterShare to FacebookShare to Pinterest 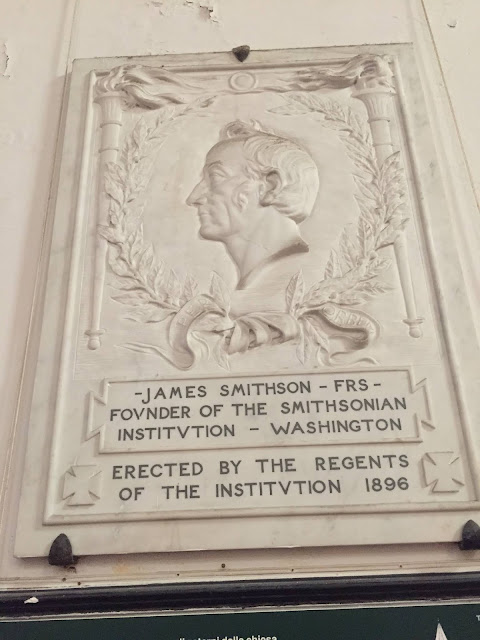 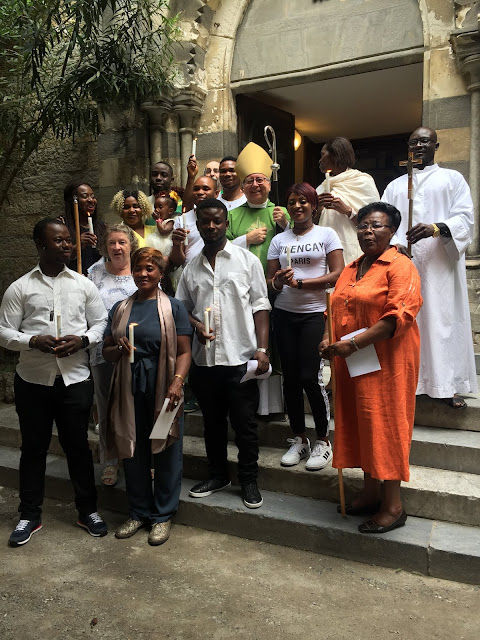 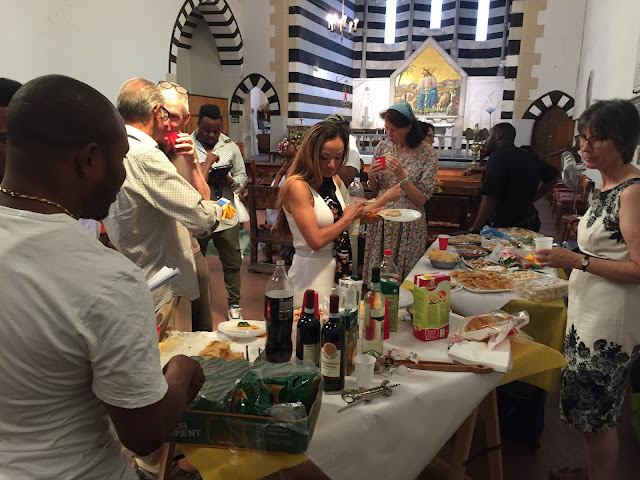 Posted by David Hamid at 13:58 0 comments
Email ThisBlogThis!Share to TwitterShare to FacebookShare to Pinterest