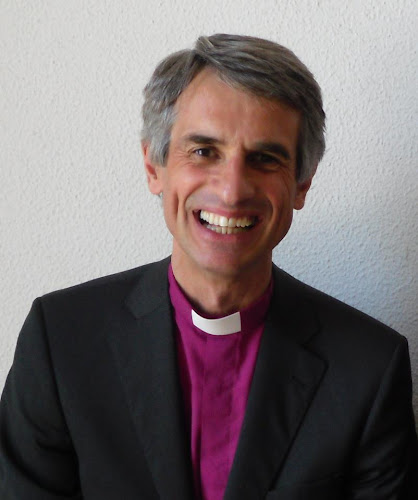 On the Feast of St Mark the Evangelist, 25 April, a new bishop, the Rt Revd José Jorge de Pina Cabral, was consecrated to serve the Igreja Lusitana Católica Apostólica Evangélica, an indigenous Church in Portugal which has been fully part of the Anglican Communion since 1980. The Lusitanian Church traces its origin to a group of Portuguese Roman Catholics who separated from Rome in the 19th century due to their objection to the doctrine of Papal Infallibility which was defined in 1870 at the First Vatican Council. 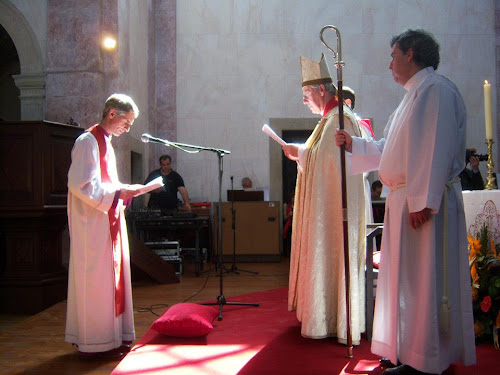 The chief consecrator at the service held at St Paul's Cathedral in Lisbon, was the Rt Revd Fernando Soares. He was assisted by several bishops from around the Communion including Bishop Geoffrey and myself, the Archbishop of Dublin the Most Revd Michael Jackson (who represented the Archbishop of Canterbury), and the Most Revd Mauricio Andrade, Primate of the Episcopal Anglican Church in Brazil who was also the preacher at the service. Bishop John Okoro, the Old Catholic Bishop of Austria was also a co-consecrator, signifying the relation of communion which exists between Anglicans and Old Catholics since 1931.

At the conclusion of the 3 hour service Bishop Soares enthroned the new bishop in his cathedra and handed him the pastoral staff. From that moment Dom José Jorge became the diocesan bishop of the Lusitanian Church with oversight of its 14 parishes. Dom Fernando has served as diocesan bishop for 31 years!
Two of our own Church of England clergy who serve in Portugal also attended, the Revd Peter Ford, who is about to become the priest-in-charge of St James's Porto, and the Revd Nigel Stimpson, who is about to become the chaplain of St George's Lisbon, with St Paul's Estoril.

We pray for Dom Jose Jorge and for his new ministry, giving thanks for our communion as sister Churches. 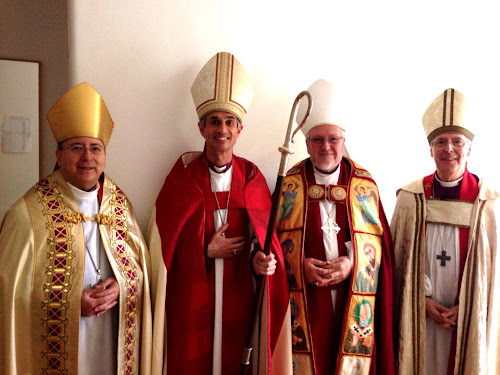 Posted with Blogsy
Posted by David Hamid at 09:12 0 comments
Email ThisBlogThis!Share to TwitterShare to FacebookShare to Pinterest 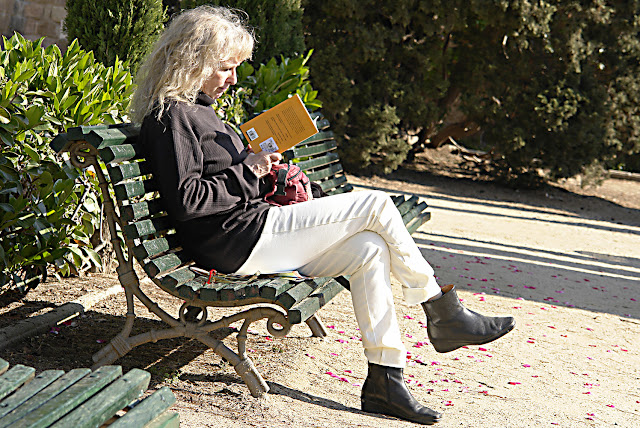 I am sorry that I missed posting the usual selection of reviews of recent theological books during the month of March. Here is April's list.

It is an stimulating selection of 10 new works including the writings of Fr Roger Greenacre, well known in this diocese, as he had served in St George's Paris and later in St Michael's Beaulieu-sur-Mer. In addition there are two very good introductory theologies, some apologetics, more on science and religion, the fascinating story of a Pope who resigned over 700 years ago, a review of human sexuality from a conservative perspective, a challenging theological critique of Facebook, and a collection of essays to celebrate last year's 350th anniversary of the 1662 Book of Common Prayer, which includes one by our own Diocesan Liturgical Advisor, Professor Paul Bradshaw.

As usual, these reviews are based on the work of Dr Martin Davie, the Theological Advisor to the Church of England's bishops.

Read more »
Posted by David Hamid at 13:45 0 comments
Email ThisBlogThis!Share to TwitterShare to FacebookShare to Pinterest

The Association of the Church of England in Italy 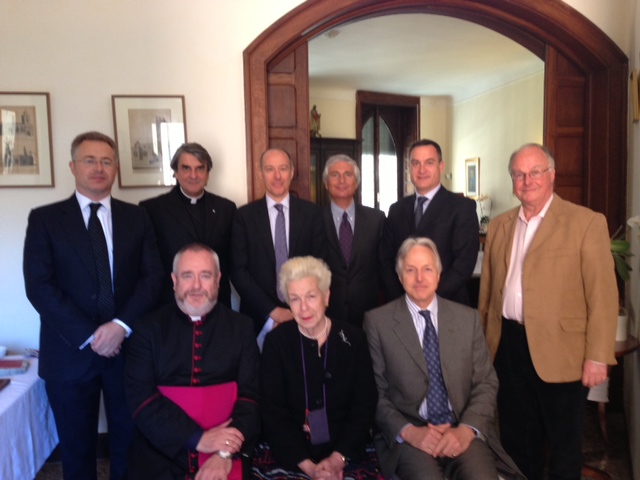 The Church of England, while established by law in England, has a very different legal status in the countries of continental Europe. In each nation the Diocese in Europe and her congregations conform to the domestic law of that country and adopt whatever measures are necessary to operate juridically and legally as a Church or religious / charitable organisation. (In some countries, such as France, the state does not recognise publicly any Church or religion).

In Italy, under the leadership of the Archdeacon of Italy and Malta, the Venerable Jonathan Boardman, preparatory work is under way to gain legal recognition of the Church of England, which will give an official status to our over 20 congregations and Anglican communities. The board of L'associazione della Chiesa d'Inghilterra in Italia is pictured above, at its inaugural meeting.

Posted by David Hamid at 15:13 0 comments
Email ThisBlogThis!Share to TwitterShare to FacebookShare to Pinterest 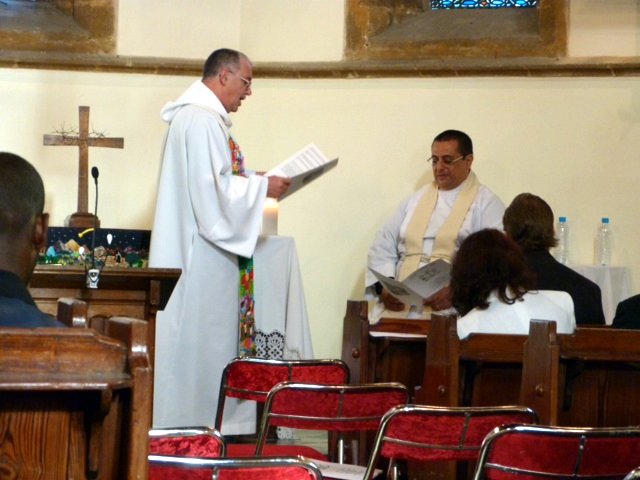 On 2nd April the Archdeacon of Gibraltar, the Venerable David Sutch, licensed the Revd Canon Dr Medhat Sabry as the priest-in-charge of St John the Evangelist Church, Casablanca. Canon Medhat comes to this diocese from the Diocese of Egypt, where he has spent most of his ministry after his training for the priesthood in Trinity College, Bristol. Fluent in his native Arabic as well as English, he also has a doctorate in Old Testament studies and has lectured on this subject in Egypt. We welcome Canon Medhat to the Diocese in Europe.

The ecumenical community in Morocco was well represented at the licensing service with the presence of the Archbishop of Rabat, Vincent Landel, local Roman Catholic priests, the French Protestant minister and the local Orthodox priest. Four churches, the Roman Catholic, the Orthodox, the French Protestant and the Anglican, are given permission by the King of Morocco to minister to our own communities. The official religion of the country is Islam. 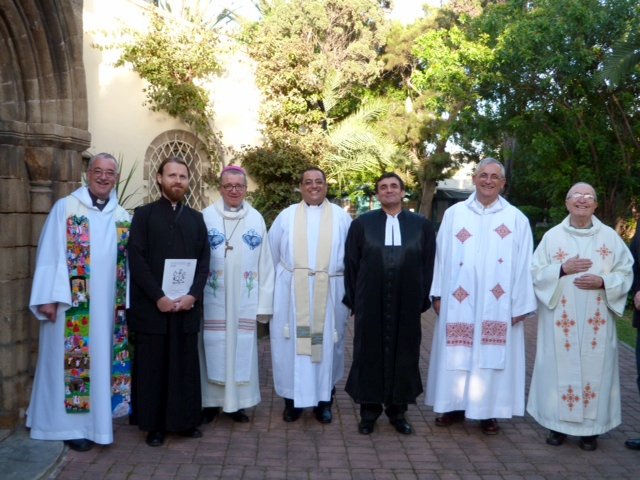 St John's is one of two churches of our diocese in Morocco, the other being St Andrew's Tangier  St John's dates from 1906. One of its most famous worshippers was Major General George Patton of the US Army who attended regularly during WWII. Casablanca is a large and bustling city. St John's is a tranquil oasis located in a green churchyard, walled off from the surrounding noise of the city. 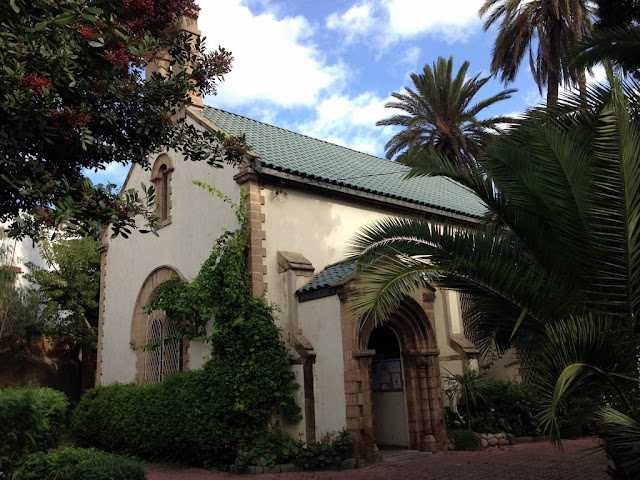 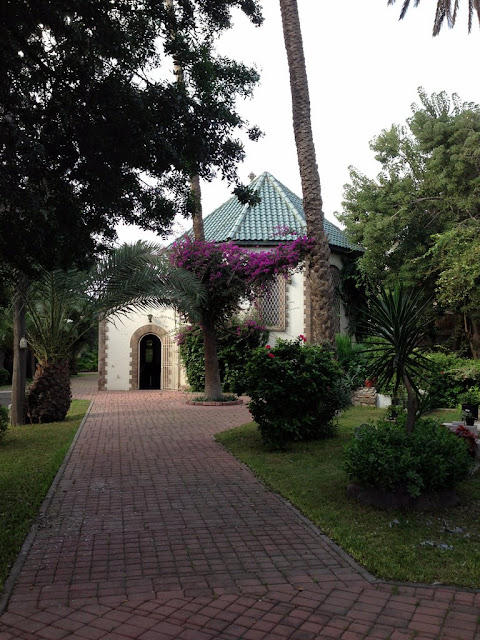 The present congregation is very international with many members from the United States and from several African countries. There is a thriving Sunday School. Services are at 10.30 am on Sunday mornings.

Posted by David Hamid at 14:22 4 comments
Email ThisBlogThis!Share to TwitterShare to FacebookShare to Pinterest 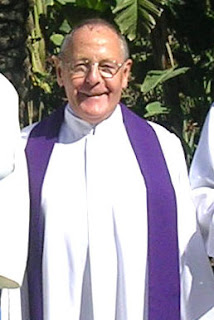 It is with great sadness that I convey the news of the sudden death of the Revd Canon Dr Alan Maude. He died yesterday, 8 April, at home in Estepona, Spain. Alan was born in 1941 and following a distinguished ministry in hospital chaplaincy in the UK came to the post of priest-in-charge of Costa del Sol West in 2006. His ministry in Malaga Province and beyond was widely appreciated. He was truly loved as parish priest and pastor.

Please pray for Canon Maude's wife Marjorie and for members of their family, and for parishioners of Costa del Sol West.

Lord Jesus, our brother and our saviour, hear the prayers of your beloved people, and comfort them in this time of sorrow. Welcome your servant Alan into paradise, and let him be with you in your kingdom and share for ever in the heavenly banquet, where you are Lord for ever and ever.

Posted by David Hamid at 11:58 3 comments
Email ThisBlogThis!Share to TwitterShare to FacebookShare to Pinterest

Senior Tutor and Advisor for Reader Ministry recommends we read this.... 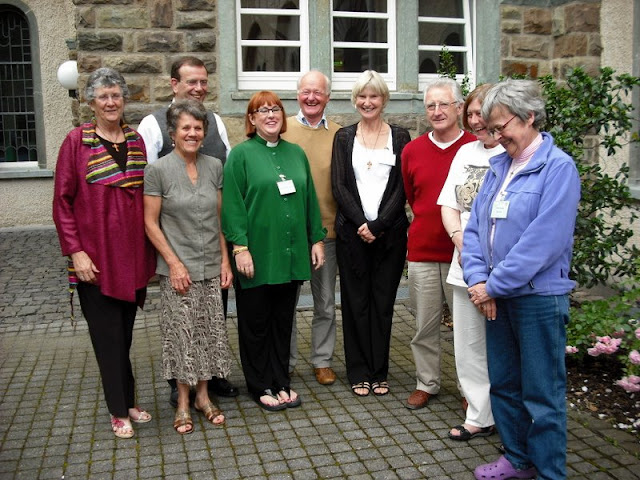 The Revd Elaine Labourel is the Senior Tutor and Advisor for Reader Ministry in this diocese (pictured above with some of her students and former students).

Elaine does a lot of reading to equip her for tutoring and mentoring her students who are scattered across 42 countries. She recently found one particular book to have some important things to say to us. Readers of this blog will already know that the Diocese in Europe, while clear about and strong in our Anglican identity, seeks to live an expression of Christianity as Anglicans have received it which moves beyond the tensions, ecclesiastical politics and partisanship that is experienced in some parts of the Communion. We reach forward to manifest a truly catholic community that lives a generous and welcoming faith. 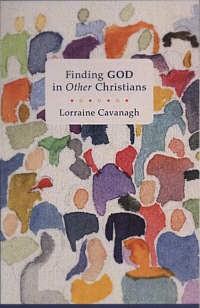 Lorraine Cavanagh, Finding God in other Christians. SPCK, ISBN 978-0-281-06585, £8.99.
As we grow in the faith, we can find God in the context of more than one kind of churchmanship. Even if we have our preferences, we can benefit from exploring new ways of meeting with God, and especially through other Christians/Anglicans whose priorities and styles of worship are different to our own. This book calls us to a profound and compassionate approach to the challenges of diversity. It explores how we can reconnect as a Christian community with one another with integrity and truthfulness. It s a book for those who want to see the Church become what is really is,the ultimate place of reconciliation and belonging.
Posted by David Hamid at 10:35 0 comments
Email ThisBlogThis!Share to TwitterShare to FacebookShare to Pinterest