Journey into Advent with Mark

Advent begins this Sunday. Our Director of Lay Discipleship, Dr Clare Amos, has been busy preparing some resources to help the faithful of the diocese to enter into the spirituality of this season.

This Monday 30 November, 18.00 Central European Time (17.00 GMT), Clare will lead a reflection on the Gospel of Mark. This brief overview of the emphasis that Mark lays out in his Gospel, will be helpful for us as Mark is the Gospel we will be mostly be reading from on Sundays during this "Year B" of the Common Lectionary.

Clare's reflections will be in the context of a brief liturgy called "A Service of Meditations for the Beginning of Advent". Clare is a Biblical scholar (among many other things) and a very engaging teacher. Do join us for this "Journey into Advent with Mark". The livestream is on the Diocesan YouTube channel:

Clare also runs for us a blog with weekly lectionary reflections from a European perspective. The blog is entitled "Exploring Faith in Europe". It can be found here: https://faithineurope.net/. Take a look at this site. In her current post Clare tells us why she is excited about Mark's Gospel quoting theologian Chris Burdon: ‘In the end, there are two ways of dealing with the Gospel according to Mark: either we throw the book away and opt for a gentler religion, or we act on it and attempt to follow this man (Jesus) through glory and through terror.’

Tune in and join the excitement, and learn about the glory and terror, on 30 November!

Posted by David Hamid at 08:41 0 comments
Email ThisBlogThis!Share to TwitterShare to FacebookShare to Pinterest

Today we wish a very happy Thanksgiving to the many folk across the diocese in Europe who come from the USA. In that country it is a national holiday and a day of thanks, which may have its origin back to 1621 when the Plymouth colonists and members of the Wampanoag nation shared an autumn harvest feast, together enjoying the fruits of the earth.

In our multinational/multicultural Diocese in Europe, we rejoice in the ministry, witness, generosity and support that so many from the United States bring to our common life. We also recognise that for many of our US friends and colleagues this year's holiday will be a difficult time. Some have endured months or more of separation from loved ones. Some have lost family or friends, or are worried about those close to them who are sick. Some are concerned for values of truth and justice in their homeland. So we pray with you, the prayer for this day in the Prayer Book of the Episcopal Church, USA:

Almighty and gracious Father, we give you thanks for the fruits of the earth in their season and for the labors of those who harvest them. Make us, we pray, faithful stewards of your great bounty, for the provision of our necessities and the relief of all who are in need, to the glory of your Name; through Jesus Christ our Lord, who lives and reigns with you and the Holy Spirit, one God, now and for ever. Amen.

Posted by David Hamid at 08:44 0 comments
Email ThisBlogThis!Share to TwitterShare to FacebookShare to Pinterest

We mourn the passing of two pioneering leaders of our diocese

This has been a sad week in the Diocese in Europe. Two great pioneers of our work, one in Finland, and the other in Poland died in the last couple of days.

Mr Geoffrey Phillips died on 16 November after a long struggle with cancer. He served the Anglican Church in Finland for many years as a Reader (Licensed Lay Minister) in particular supporting the work of the English speaking congregation in Turku where he lived. He was an enthusiastic promotor of the Porvoo Agreement, and our good relations in Turku are due, in no small measure, to the respect with which he was held by our Church in Finland partners over the 25 years of the Agreement.

He was generous in every way to the Anglican work in Finland, and we thank God for his faithful and loving ministry, and for his kind consideration of the future of our work there. The Chaplain of St Nicholas Helsinki and Area Dean for Finland, the Revd Tuomas Mäkipää writes:

"It is with great sadness that I must share the news of Geoffrey’s death. He died yesterday after fighting cancer for two years. Geoffrey will be remembered for his welcoming smile, friendship and patience; for his services to the Diocese in Europe and Anglican Chaplaincy in Finland as Licensed Reader and benefactor. He received the Royal Maundy from the Queen in 2011.

Geoffrey was an active member of the Turku Cathedral International Congregation until very recently, occasionally preaching, preparing the prayers of intercession and assisting at the Holy Communion. He and his wife Meg made a large donation to the Diocese in Europe and the Chaplaincy in Finland. He did not wish the donation to be anonymous but did not asked for great publicity either: after serving the Anglican Church for years, he was also concerned for her future well-being.

Geoffrey’s funeral service is at the Ylösnousemuskappeli (Chapel of Resurrection) in Turku on Thursday at 2 p.m (GMT+2). There is no gathering after the service due to current restrictions. Instead of flowers, donations to cancer research are suggested."

Geoffrey is survived by his wife Meg.

And yesterday we learned that the Revd Robert Gamble, a retired priest in Poland, died. Fr Bob, as he was known, laid the foundation for our present work in Warsaw, and indeed in what has become officially recognised and registered in the country as "The Anglican Church in Poland". Fr Bob was an Episcopalian, originally from Philadelphia. His love for Poland developed long before the fall of the iron curtain. He was held in great esteem in the country, particularly in the city of Poznan where he lived, for his work in communications, social outreach and publishing. (He brought the Harry Potter saga to Poland).

The Revd David Brown the Chaplain of the Anglican Church in Poland wrote yesterday:

"Fr Bob died earlier this morning, very peacefully, in a Poznan hospital. His closest relative is his son Dominic in Texas in  the United States. Bob has been a great friend to the Chaplaincy here in Poland for more than 20 years  He has given so much  to many, many people in his life and has always  had a great, warm, generous, giving heart for the needy, the vulnerable and those experiencing difficulties in their lives."

O God, your mercies are more than we can know; hear our prayers for your servants Geoffrey and Robert; and welcome them into the land of light and joy, in the fellowship of all your saints; through Jesus Christ our Lord. Amen.

Posted by David Hamid at 10:49 0 comments
Email ThisBlogThis!Share to TwitterShare to FacebookShare to Pinterest 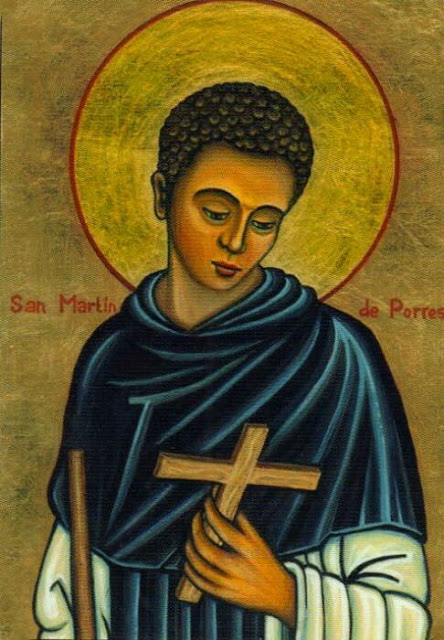 Today is the commemoration of St Martin de Porres, a Dominican friar, born in Lima, Peru in 1579, of a Spanish nobleman and a freed African slave. Because of his care for all regardless of class or colour he is considered the patron saint of race relations and social justice. Perhaps a fitting saint to be celebrated on this election day in the USA.

There are many US citizens who live and work in this diocese (including a number of our clergy). Almost all I have spoken to have eagerly taken advantage of mail-in voting and have exercised their democratic right. We pray today for the USA, in the words of a collect from the Book of Common Prayer of the Episcopal Church:

Almighty God, to whom we must account for all our powers and privileges: Guide the people of the United States in the election of officials and representatives; that, by faithful administration and wise laws, the rights of all may be protected and the nation be enabled to fulfill your purposes; through Jesus Christ our Lord. Amen.

In another connection with our circumstances today, St Martin de Porres, during an epidemic in Lima, broke the rules of the convent to minister and care for the sick who were kept behind locked doors. He was disciplined by superiors, but responded: "Forgive my error, and please instruct me, for I did not know that the precept of obedience took precedence over that of charity"

The Archdeaconry of Gibraltar is twinned with the Anglican Diocese of Peru.

God, you aroused in Martin de Porres a sense of Christian social conscience to help the poor and needy. Let this same sense of social justice flourish in us, in our nations, and in our world today, to bring about a new rebirth of hope.

Posted by David Hamid at 09:44 0 comments
Email ThisBlogThis!Share to TwitterShare to FacebookShare to Pinterest

Ecumenical outreach to the needy in Lanzarote

A plan to take advantage of a travel corridor still open between the UK and the Canary Islands has been cancelled: a visit to the chaplaincy of St Laurence, Lanzarote, on 14-15 November. Last Saturday night new English lockdown arrangements effective from 5 November were announced by Prime Minister Boris Johnston. Travel within the country and abroad is now not possible, unless considered essential. So, sadly, Lanzarote is added to the growing pile of cancelled pastoral visits dating back to last March. The chaplain, the Revd Canon Stan Evans was very understanding.

In Lanzarote the mission of the chaplaincy to reach out to the lost and marginalised on the island has been growing. Fr Stan is working with his Roman Catholic colleague, Fr Agustin Lasso, to look at ways to work together to serve the 600 families who are in desperate need on the island, reaching out "with the compassion of Christ as so many are hurting or are bruised at this time". There was bountiful and generous support in the parish's recent harvest festival which will greatly help this joint mission. "Together we can do so much more than apart".

Clearly, many things are cancelled because of COVID-19; but across the diocese, love and compassion are not among them! 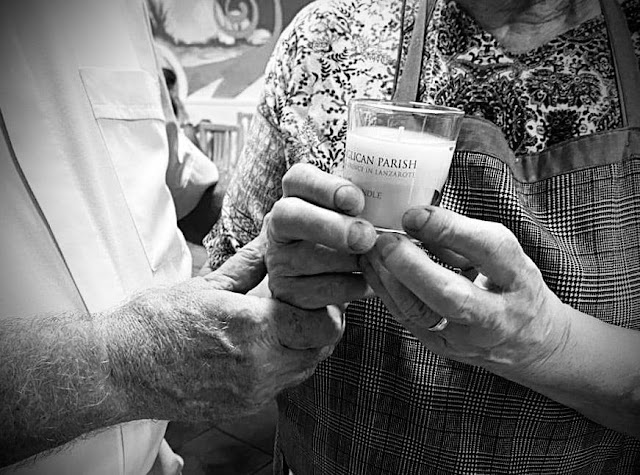 Posted by David Hamid at 13:10 0 comments
Email ThisBlogThis!Share to TwitterShare to FacebookShare to Pinterest