On Wednesday 23rd October, the Patriarch of Venice, His Beatitude Francesco Moraglia, made a visit to St George’s Anglican Church in the city. He had dedicated the greater part of a whole week to a pastoral visit to the Roman Catholic parish of Gesuati in which St George’s is situated. This parish is composed of various significant churches to which are attached schools and institutions. Within his heavy schedule he had expressed a wish to visit St George’s, meet with the community and there hold a brief moment of prayer. After the prayers he spoke of both Churches standing under the Cross. He also mentioned that whenever he travelled up the Grand Canal and passed St. George’s he offered a prayer for its ministry.

This is not the first visit of a Patriarch of Venice to St George’s. Nevertheless, it speaks of the warmth of relationship and mutual respect that now exists between the Roman Catholic Church and the Anglican Church.

Posted by David Hamid at 21:38 0 comments
Email ThisBlogThis!Share to TwitterShare to FacebookShare to Pinterest

John Henry Newman, the key figure in the Oxford Movement in the Church of England who converted to Roman Catholicism in 1845, was canonised by Pope Francis yesterday in Rome. His conversion was highly controvesial in the middle of the nineteenth century and at the time was felt by many to be a setback for the Oxford Movement itself. Nevertheless, we Anglicans owe much to Newman for his teaching and influence which restored to the Church of England a renewed understanding its rootedness in the Catholic Church of Christ.

I have a particular admiration for the way that Newman taught both Anglicans and Roman Catholics about how doctrine in the life of the Church can develop, through such doctrine being rooted implictly in Holy Scripture, attested to by the Tradition of the Church (through Patristic and other theologians), and under the guidance of the Holy Spirit affirmed by the Church as a whole. It was remarkable in both Anglican and Roman Catholic theological circles of his day, that Newman underlined the active role of the lay faithful together with the ordained, in keeping and handing down the Apostolic Faith and leading the Church forward in understanding the truth of the Gospel. 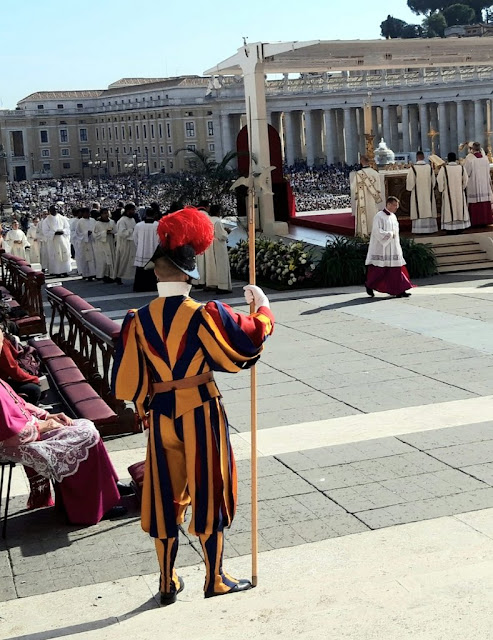 The Saint's thought ended up having a major influence in the Second Vatican Council, which in its Constitution on Divine Revelation, Dei Verbum (which I consider to be one of the most important texts of Vatican II), states, "For there is a growth in the understanding of the realities and the words which have been handed down. This happens through the contemplation and study made by believers, who treasure these things in their hearts (see Luke, 2:19, 51) through a penetrating understanding of the spiritual realities which they experience, and through the preaching of those who have received through Episcopal succession the sure gift of truth. For as the centuries succeed one another, the Church constantly moves forward toward the fullness of divine truth until the words of God reach their complete fulfillment in her." (Dei Verbum Para.8).

No wonder that HRH Prince Charles, who attended the canonisation then a reception hosted by the UK Embassy to the Holy See, encouraged us all, Anglicans and Roman Catholics, to celebrate St John Henry as a priest, poet but above all as a thinker ahead of his time. "One of the greatest theologians of the nineteenth century", is how Prince Charles described him.


The Diocese in Europe was well represented at the canonisation. Our Diocesan Registrar, Mr Aiden Hargreaves-Smith, the Revd Canon Matthew Harrison (formerly Chaplain of St George's Paris and the first occupant of the stall of John Henry Newman in the Pro Cathedral in Valletta), and the Chaplain of All Saints, Rome, the Revd Robert Warren, joined me in the delegation. It was fitting for us to be present as our late Bishop Geoffrey Rowell was himself a Newman scholar, who shared with many of us in the diocese and beyond his esteem for the saint's enduring theological gifts to the whole Church of Christ. Bishop Geoffrey, I believe, was also influenced by John Henry Newman's approach to teaching as being not merely an academic and intellectual exercise to impart learning, but an engagement that involved pastoral care for the whole person as well.

There were several other bishops, clergy and laity from the Church of England and the Anglican Communion in attendance, where we were given privileged seats a few metres from His Holiness for the canonisation mass. Archbishop Ian Ernest, the new Director of the Anglican Centre in Rome, who has just arrived in the city, was greeted personally by the Pope, who momentarily stepped out of the entrance procession to speak to him. 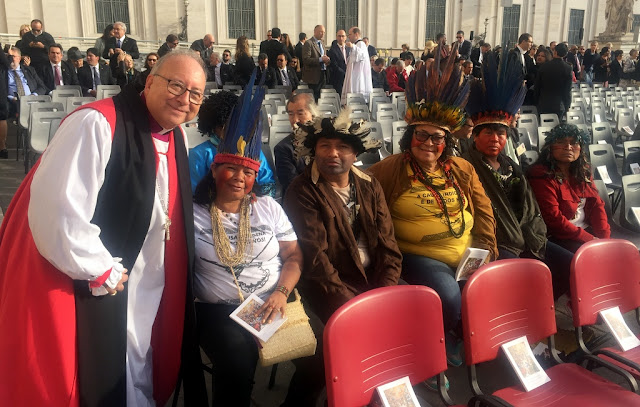 As the Synod for the Pan Amazon region is still underway in Rome, there were also large numbers of bishops and faithful from that part of the world, including some of the indigenous peoples of Amazonia, with whom I had some conversation about their struggles, particularly environmental and human rights related, in their homelands. 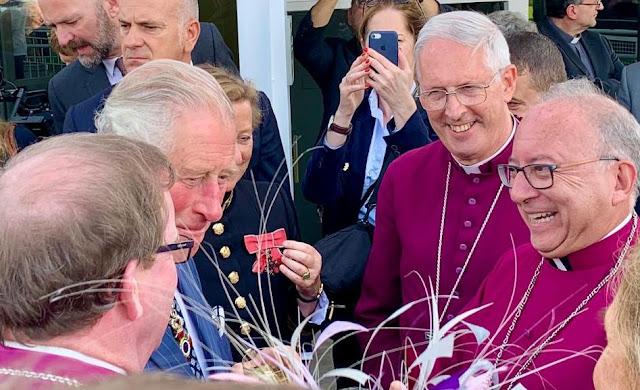 When Newman preached his last sermon as a priest of the Church of England it was entitled, "The Parting of Friends". Somehow at the canonisation we Anglicans felt reunited with our Roman Catholic friends. Perhaps St John Henry Newman should be the patron of ecumenism as some have suggested.

Support us, O Lord, all the day long of this troublous life, until the shadows lengthen and the evening comes, the busy world is hushed, the fever of life is over and our work is done.
Then, Lord, in your mercy grant us a safe lodging, a holy rest, and peace at the last;
through Christ our Lord. 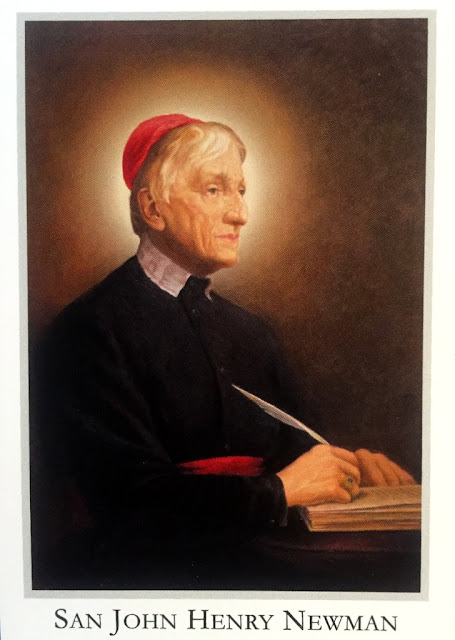 Posted by David Hamid at 14:45 0 comments
Email ThisBlogThis!Share to TwitterShare to FacebookShare to Pinterest

Archbishop of Palermo at Italy / Malta Synod, a historic moment

The Italy/Malta Synod was held from 25-28 September in Palermo, Sicily. The theme, "Welcoming, Invitation and Hospitality" was explored through bible studies, plenary sessions and through chaplaincies sharing highlights from their community life. One of the features of this archdeaconry is the fact that some churches are located in places with large numbers of visitors and pilgrims (such as Venice, Florence and Rome). We also recognised that a common feature across the Archdeaconry (and the diocese) is that by and large our members are migrants; that is to say that most of our members come from "somewhere else". Many of our churches in Italy and Malta are exploring how their communities can be a home and a place of welcome for newer waves of migrants who are settling in these countries, from places other than the UK. There is a special charism in being a migrant church.

During the synod a presentation was also heard on "thy Kingdom Come", the novena of prayer between Ascension and Pentecost, originally a Church of England initiative, but now a global ecumenical phenomenon. The new Diocesan Secretary, Mr Andrew Caspari, also was present at this his first synod of this Archdeaconry.

We were blessed with the visit of the Archbishop of Palermo, Corrado Lorefice, who graciously agreed to be our preacher at one of the masses during the synod. His Excellency gave an inspiring sermon on the Eucharist, linking the sacred meal to our Christian calling to provide the Bread of Justice in the world. I believe that this was the first occasion when a Roman Catholic Archbishop has preached at one of our synods. A very positive sign of our growing together as Anglicans and Roman Catholics.

The synod was not all work. A pub quiz organised concluded the meeting, with a very humble team emerging as winner. 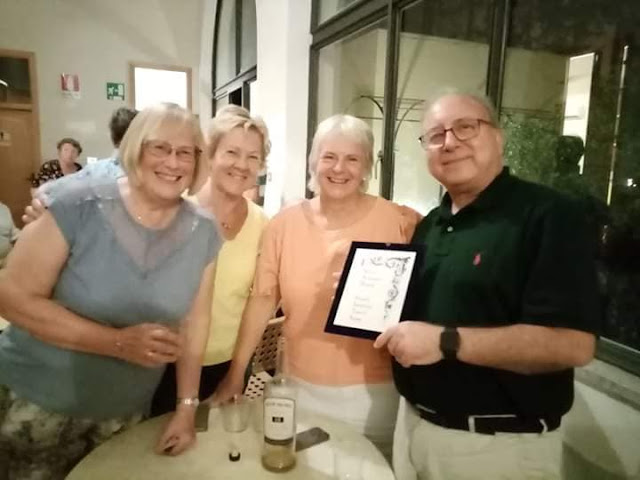 Posted by David Hamid at 13:18 0 comments
Email ThisBlogThis!Share to TwitterShare to FacebookShare to Pinterest