An historic day at St John the Evangelist, Casablanca

St John the Evangelist Church, Casablanca, is the oldest church in continuous use in the city. Consecrated in 1906, by the then Bishop of Sierra Leone, it has been the home to English speaking Christians in Morocco's largest city for over 100 years.


In recent times, especially under the direction of its current Chaplain, the Revd Canon Dr Medhat Sabry, St John’s has grown significantly. Two packed church services are now held each Sunday. The community itself counts on people from at least 17 different nations around the world. St John's also hosts a Chinese congregation and a French speaking student congregation which both use the church each week. 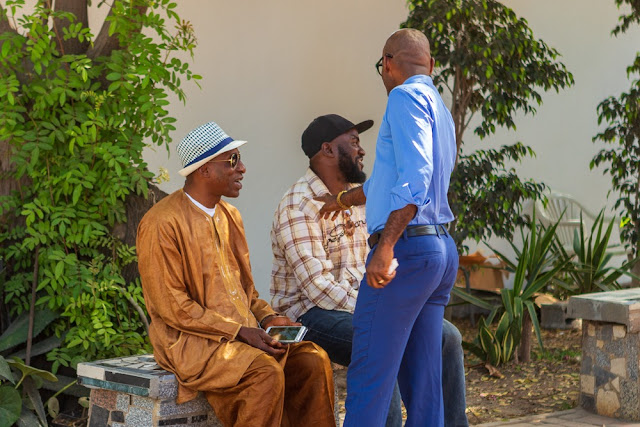 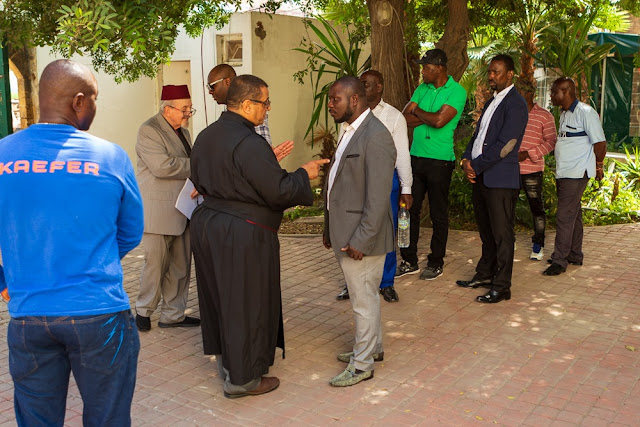 Fr Medhat in 2016 began working with the parish in putting together an ambitious development project in two phases. Phase One included the construction of a community centre with facilities to serve the burgeoning migrant and refugee community in the city. The community centre includes classrooms where basic skills can be taught and training given, and a place for assistance with pastoral questions, counselling, documentation and other advice, and mutual support groups for the various sub-Saharan nationalities, as well as being a centre for the St John’s humanitarian outreach programme. It will also provide an office for the priest, new toilets, and space for the parish's own educational work with children and adults. 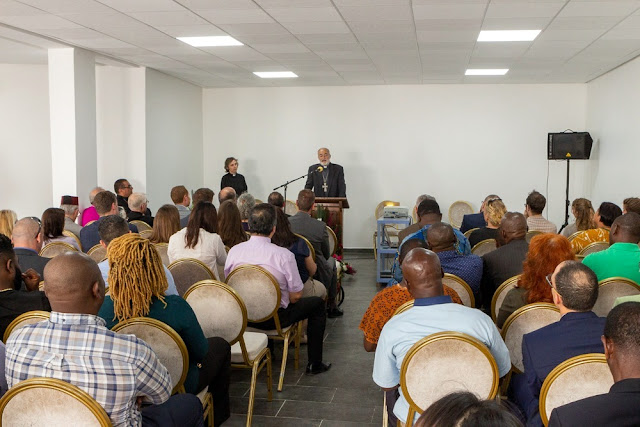 On Friday 21 June, in a joyful civic occasion, the community centre was opened. Among the official guests were the Governor of Casablanca-Anfa, representing His Majesty King Mohammed VI, the UK Ambassador, the US Acting Head of Mission, a host of other diplomats, the Archbishop of Rabat, and several ecumenical dignitaries. Ribbon cutting, official speeches and a festive reception marked this, the conclusion of Phase One of the development project. 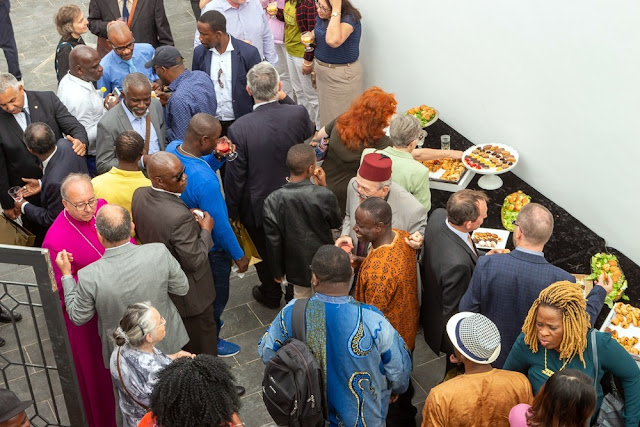 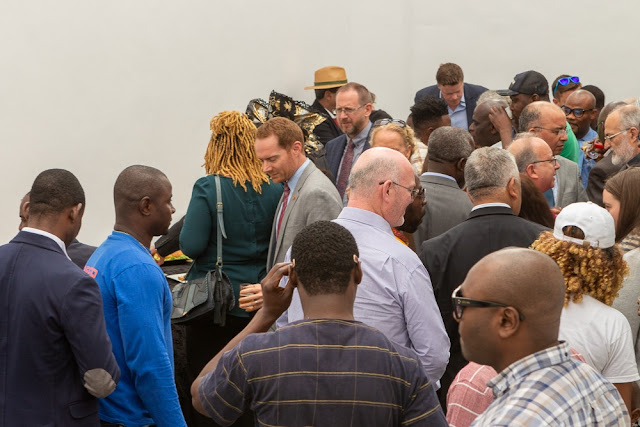 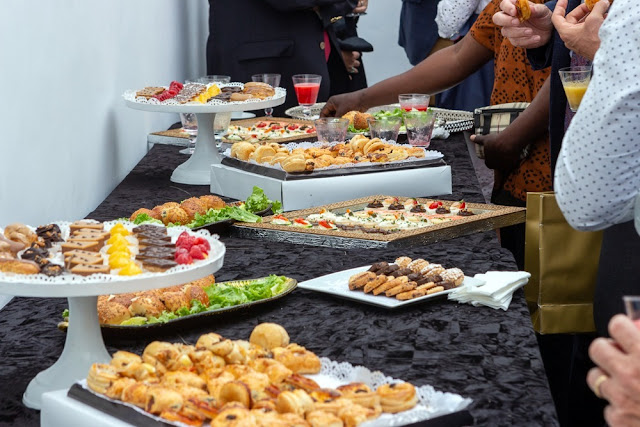 Rebecca Boardman from USPG, (United Society Partners in the Gospel) which has been supporting the project, remarked on the significance of the community centre, in terms of the Church's ministry to those in need: "Within the perimeter walls of St John’s is a safe space for the many who are now finding themselves, either permanently displaced in Morocco, or among the thousands seeking a route eventually to Europe, to meet, and to have their needs addressed, in a country and city, where for many refugees and migrants, there are few such options".

Following the civic opening, a eucharist was celebrated in the church during which a procession was made to the community centre, (accompanied by African songs and drum), for it to be formally blessed. Archdeacon Geoff Johnston spoke of the vital witness of St John's and its impressive international and lively community. Canon Joanna Udal, who is currently serving as locum priest in Tangier, was also able to join us in Casablanca. 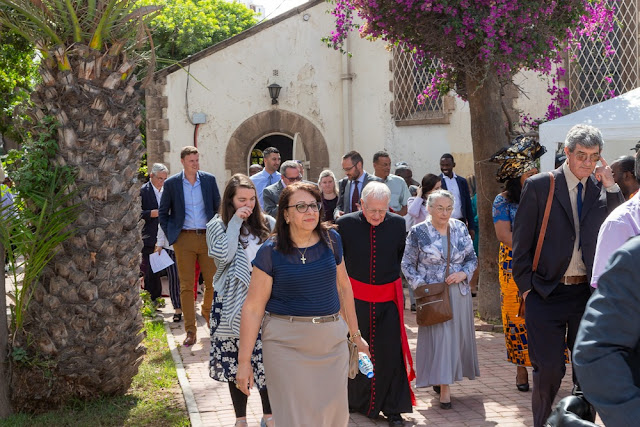 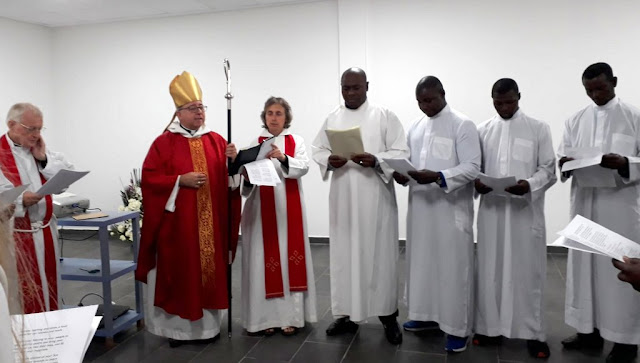 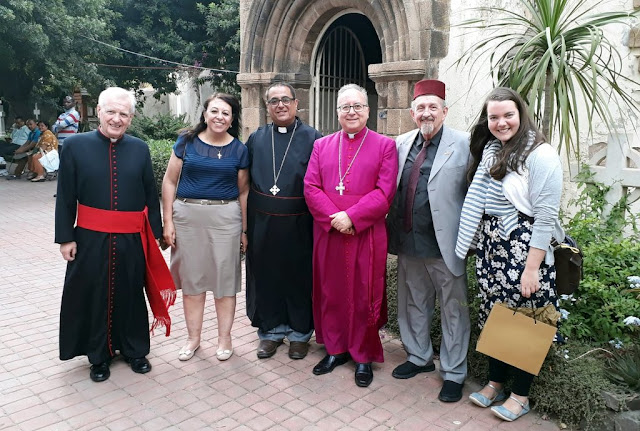 Phase Two, an expansion of the church building itself to double its seating capacity begins almost immediately. The total cost of the development project, (Phases One and Two) is about 5 million Moroccan Dirhams, (approximately £400,000) of which all but about 200,000 Dirhams remains to be raised. It has been an incredible cooperative effort by parishioners, partners such as USPG, and other individuals. But most of all it is due to the constant prayer and hard work on the ground by Fr Medhat and the parish lay leadership team which have brought us to this day.

Posted by David Hamid at 12:59 0 comments
Email ThisBlogThis!Share to TwitterShare to FacebookShare to Pinterest 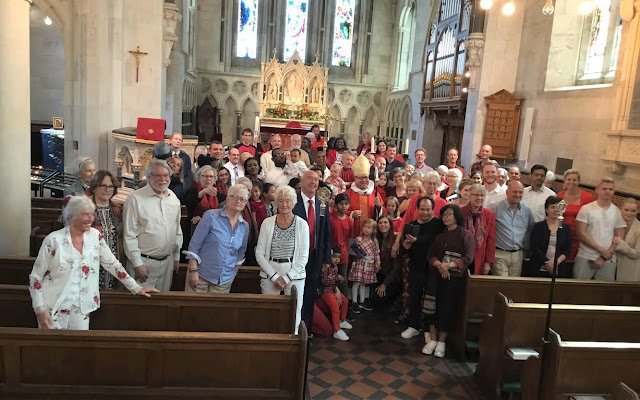 "Wear red for Pentecost" was the instruction given to the people of St Alban's Copenhagen by their priest the Revd Smitha Prasadam. And bold flashes of red - the colour of flame, the colour traditionally associated with the Holy Spirit - were certainly on display in what is already a very colourful congregation. 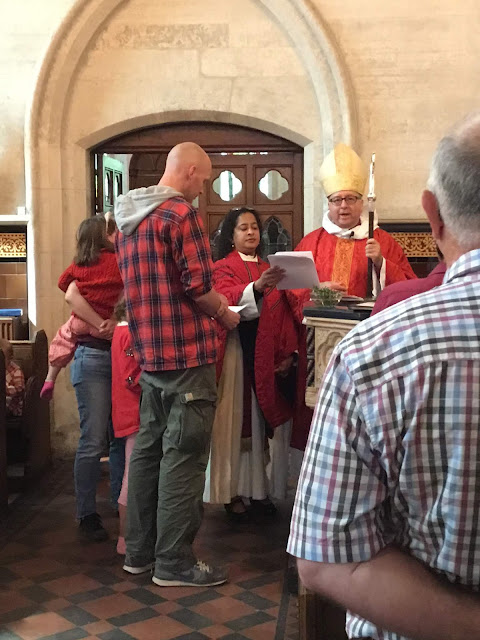 During the festive eucharist on Sunday a member of the congregation was formally received into the communion of the Church of England. (He had been episcopally confirmed in another Church tradition). It gave an opportunity for the whole assembly to give thanks for the Spirit's movement in their lives and in the community, and to consider how that same Spirit imight be moving them forward in their congregational life and mission. As Mother Smitha said in the St Alban's Parish Magazine:  "...what if the Spirit's work is to create for us a new problem: that we have a story to tell, mercy to share, love to spread, and we just can't rest until we've done so?"

St Alban's already has a reputation for being a lively, inclusive, forward-looking and welcoming congregation. One member who has been worshipping here while posted tto Copenhagen from his home in Tennessee said, "I thought that I would find some old musty church with ten people in attendance on a Sunday...How delighted we have been to discover an energetic, diverse congregation of all ages and backgrounds". 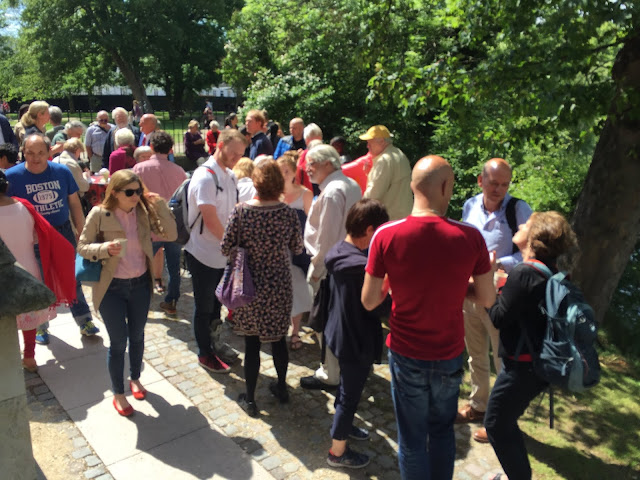 Posted by David Hamid at 17:06 0 comments
Email ThisBlogThis!Share to TwitterShare to FacebookShare to Pinterest

St George's Berlin, a place of refreshment and life 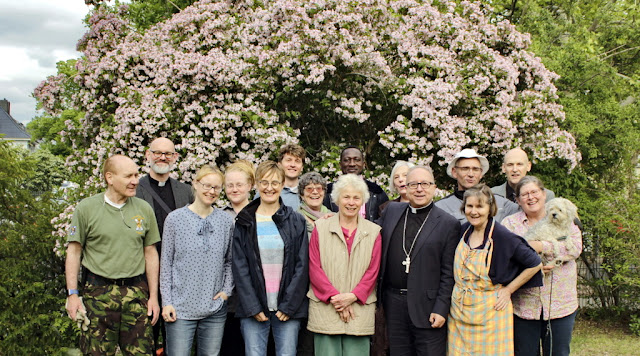 A Church of England parish where songs are sung in Urdu, African heritage celebrated with a thanksgiving service, vocations are nurtured, and faith confirmed? St George's Berlin, of course! This congregation reflects the vibrancy and diversity of the German capital itself. 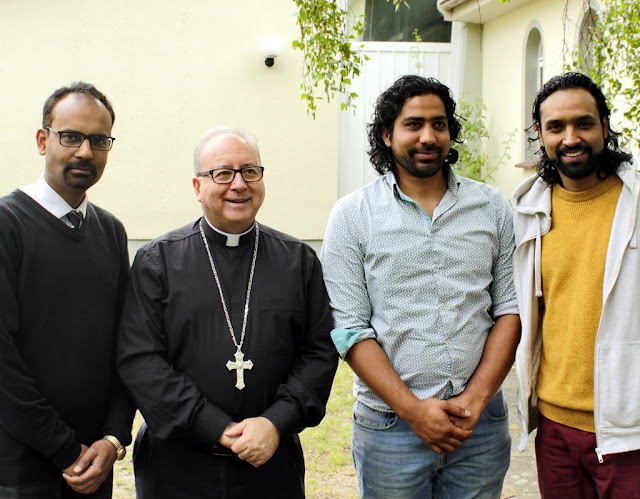 A notably multicultural parish, led by the Revd Canon Christopher Jage-Bowler, St George's is a microcosm of the world-wide Church. It seems that everyone, no matter their Church tradition, language spoken, or cultural background can find a welcome here. There are opportunities for all to celebrate and grow in their faith and in their service to their brothers and sisters. For instance, Canon Jage-Bowler is particularly moved by the commitment in St George's to their well-building projects, as a key part of their overseas outreach. So far, funding from St George's has enabled wells to be constructed in Uganda, Nigeria and Yemen. He notes that "wells attract people, as the Church itself should". "Wells are the opposite of walls; they are places of refeshment and life". 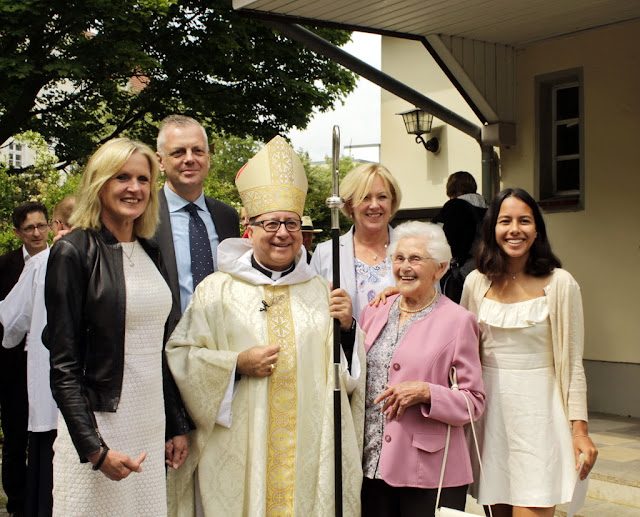 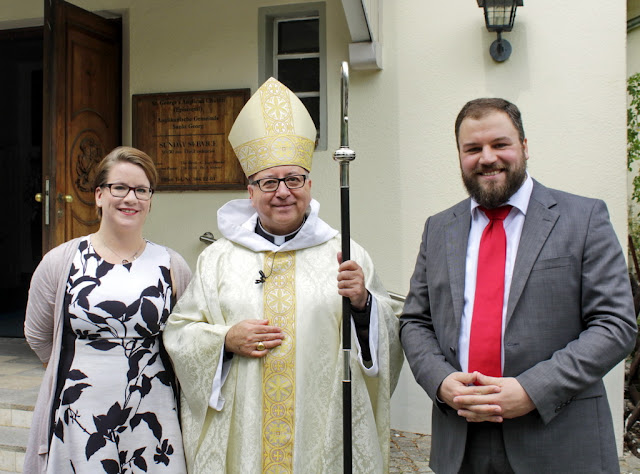 At a recent parish visit, baptism and confirmation were celebrated (including two candidates who were confirmed from the parish of Heidelberg). The Revd Fr Joachim Reich was licensed as assistant curate, and I had an opportunity to practise some rusty Urdu during the communion song. Many of the African members of the congregation proudly advertised the upcoming African Thanksgiving Service on 16 June. 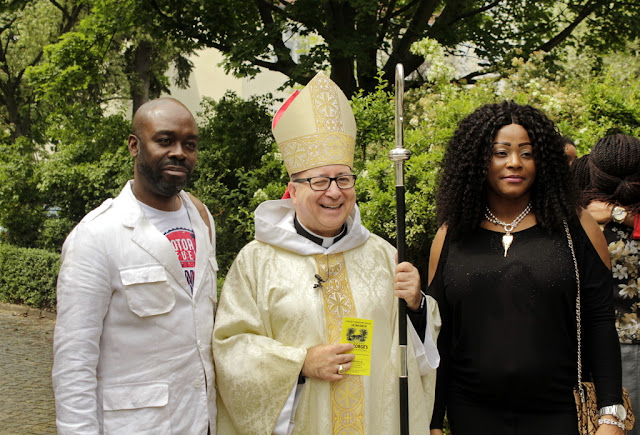 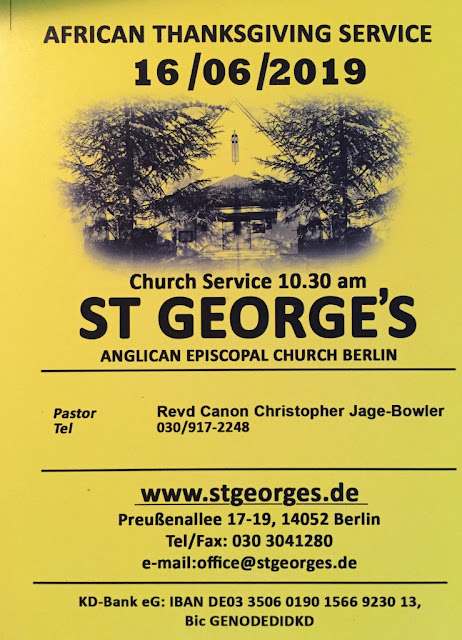 Posted by David Hamid at 20:03 0 comments
Email ThisBlogThis!Share to TwitterShare to FacebookShare to Pinterest