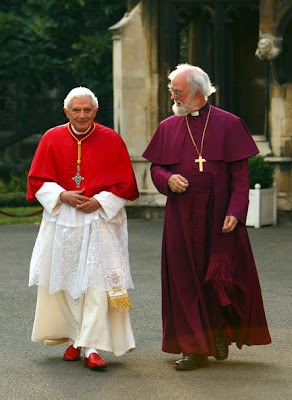 On Friday 18 September, the second day of Pope Benedict XVI's state visit to the UK, the Pontiff and the Archbishop of Canterbury, in their addresses and in their worship together at Westminster Abbey, gave prominence to the ecumenical relations between our two communions.

Bishops of the Roman Catholic and Anglican dioceses in England, Wales and Scotland met together with the Pope and Archbishop at Lambeth Palace in the afternoon. Archbishop Rowan recalled John Henry Newman's correspondence with Edward Bouverie Pusey, after the former's conversion to Roman Catholicism, that "it is what is unholy on both sides that keeps us apart". The Archbishop underlined the bishops' role as servants of the unity of Christ's people, and did not sidestep the seriousness of obstacles to full, restored communion. Nevertheless, he said that "no obstacles stand in the way of our seeking, as a matter of joyful obedience to the Lord, more ways in which to build up one another in holiness by prayer and public celebration together, by closer friendship, and by growing together both in the challenging work of service for all whom Christ loves, and mission to all God has made". Pope Benedict, in response, said "it is not my intention today to speak of the difficulties that the ecumenical path has encountered....Rather I wish to join you in giving thanks for the deep friendship that has grown between us and for the remarkable progress that has been made in so many areas of dialogue." He also recalled Newman's eirenical spirit to former Anglican colleagues and said to the Archbishop "in that same spirit of friendship, let us renew our determination to pursue the goal of unity in faith, hope, and love, in accordance with the will of our one Lord and Saviour Jesus Christ"

Later, at a moving celebration of Evening Prayer in Westminster Abbey, both Archbishop and Pope spoke of the role of the successor of St Peter with regard to the unity of Christ's Church. Pope Benedict recalled how he has "particular care for the unity of Christ's flock". The Archbishop responded by referring to Pope Benedict's predecessor's call "to reflect together on how the historic ministry of the Roman Church and its chief pastor may speak to the Church catholic - East and West, global north and global south, of the authority of Christ and his apostles to build up the Body in love".

Kneeling together at the shrine of St Edward the Confessor, as incense rose to accompany their intercession, the Pope prayed


Lord, hear the prayers of your people, and bring the hearts of believers together in your praise and in common sorrow for their sins. Heal the divisions among Christians; that we may rejoice in the perfect unity of your Church, and move toghether as one to eternal life in your kingdom. Grant this through our Lord Jesus Chrsit, your Son,who lives and reigns with you and the Holy Spirit, one God, for ever and ever 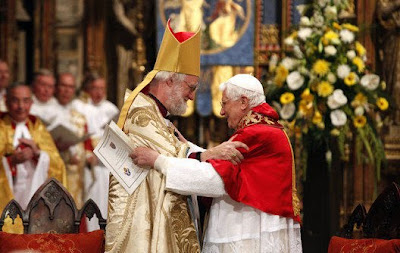 (Pictures from http://www.facebook.com/#!/papalvisit?ref=ts
Posted by David Hamid at 16:43
Email ThisBlogThis!Share to TwitterShare to FacebookShare to Pinterest