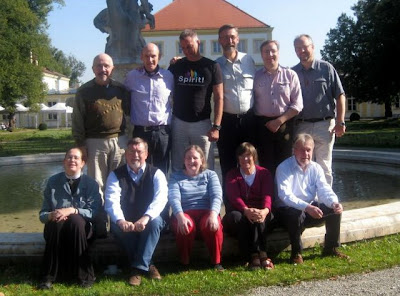 The Diocese in Europe Deanery Synod of Germany met on 23 - 24 September in Munich, preceded by the semi-annual clergy chapter meeting on Thursday 22nd.  Uniquely in the Anglican Communion, the C of E  deanery clergy and parish representatives meet with the representatives of The Episcopal Church parishes in Germany in a body called the Council of Anglican Episcopal Churches in Germany (CAECG). This year's meetings were at Schloss Furstenried Exerzitienhaus, a Roman Catholic retreat house on the outskirts of the city. The Pope, who arrived on Friday in Berlin, is a former student at this retreat house.

Apart from the usual business of synod, the Reverend Carola von Wrangel, Rector of Christ The King Episcopal Church in Frankfurt, led reflections on conflict and conflict resolution in the Church, under the theme:  "Conflict? We don't have no stinkin' conflict!". Bishop Dr Matthias Ring of the Old Catholic Church of Germany sent warm greetings to the Anglican / Episcopal gathering, in which he said "I wish you God's blessing for your meeting and the work in your congregations. Let us continue to keep alive the friendship and fellowship between our churches."

The gathering will bid farewell to the Revd Dorothee Hahn, Assistant Rector of The Episcopal Church of the Ascension in Munich, who is moving to Romania next month to serve with a mission in the Romanian Orthodox Church.

Below, the Revd Carola von Wrangel leads sessions on conflict. 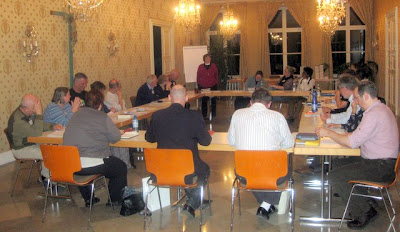 .
Posted by David Hamid at 01:07
Email ThisBlogThis!Share to TwitterShare to FacebookShare to Pinterest