Bishop Justin Welby to be 105th Archbishop of Canterbury 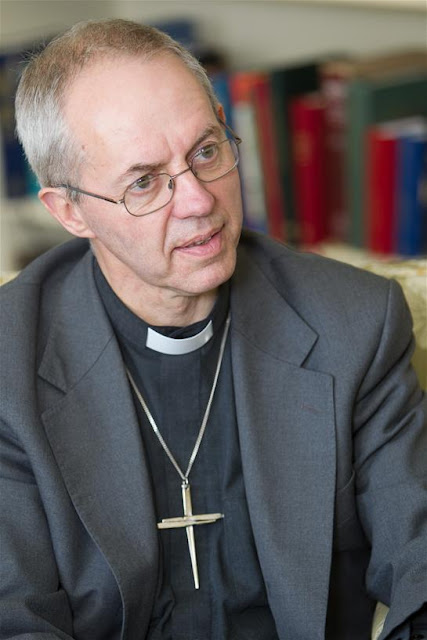 Today Downing Street announced formally what the press had already been proclaiming for a couple of days, that the Queen has approved the nomination of the Right Revd Justin Welby, the Bishop of Durham, as the 105th Archbishop of Canterbury.

I am very pleased to hear of this appointment. It is excellent news for this Diocese in Europe as Bishop Justin already knows us rather well. Before his ordination he lived and worked in Paris and was an active member of the Council of St Michael's Church there. He retains a keen interest in French culture and life.

More recently, in 2011 while he was still Dean of Liverpool, he was a keynote speaker at the Synod of the Archdeaconry of Gibraltar and led reflections on "Growing Together: Conflict and Growth" which were very well received, and showed a deep wisdom in matters to do with congregational life and conflict in communities. Many delegates to the synod spoke to me of how warmly he engaged with them during the meetings.

We pray for Bishop Justin, his wife Caroline, and their children, as they make preparations to move from Durham to Lambeth, and especially for Bishop Justin as he takes up the enormous responsibilities of his new office in the Church of England and in the Anglican Communion.

Eternal Father  look with love upon your people. Guide Bishop Justin who has been called to the office and ministry of Archbishop of Canterbury, and all the shepherd you have chosen to lead us.  Give them the grace and guidance of your Spirit so that they may bring us to you in the footsteps of Jesus our Lord. Amen.


Announcement of the 105th Archbishop of Canterbury

He said today:  “To be nominated to this post is both astonishing and exciting. It is something I never expected, and the last few weeks have been a very strange experience. It is exciting because we are at one of those rare points where the tide of events is turning, and the church nationally, including the Church of England has great opportunities to match its very great but often hidden strengths. I feel a massive sense of privilege at being one of those responsible for the leadership of the church in a time of spiritual hunger, when our network of parishes and churches and schools and above all people means that we are facing the toughest issues in the toughest place.”

Dr Rowan Williams issued the following statement:
"I am delighted at the appointment of the Right Reverend Justin Welby to Canterbury. I have had the privilege of working closely with him on various occasions and have always been enriched and encouraged by the experience. He has an extraordinary range of skills and is a person of grace, patience, wisdom and humour; he will bring to this office both a rich pastoral experience and a keen sense of international priorities, for Church and world. I wish him - with Caroline and the family - every blessing, and hope that the Church of England and the Anglican Communion will share my pleasure at this appointment and support him with prayer and love."
ENDS

Notes to editors:
Biographical details of the Right Reverend Justin Welby and about the roles of an Archbishop of Canterbury are attached, along with other relevant background material.

Biographical Information
Born in 1956 in London, the Right Reverend Justin Welby was educated at Eton College and Trinity College, Cambridge, where he studied history and law. For 11 years - five in Paris and six in London – he worked in the oil industry, becoming group treasurer of a large British exploration and production company. He focused mainly on West African and North Sea projects. During this period he became a lay leader at Holy Trinity, Brompton in London, having been a council member at St Michael’s Church in Paris. His father’s family were German Jewish immigrants who moved to England to escape anti-Semitism in the late 19th century, and integrated quickly. His British ancestors, on his mother’s side, include several clergymen.

A major influence both on Justin and his wife Caroline was their experience of personal tragedy. In 1983 their seven-month old daughter died in a car crash in France. Six years later in 1989, after sensing a call from God, Bishop Justin stood down from industry to train for ordination. He took a theology degree at St John’s College, Durham, in which he focused on ethics – particularly in business. He has since published articles on ethics, international finance and reconciliation. His booklet, ‘Can Companies Sin?’, drawing on his experience in the oil industry, evolved from his dissertation at theological college. He has frequently said that the Roman Catholic approach to Christian social teaching, beginning with the encyclical of Leo XIII's Rerum Novarum, up to Pope Benedict XVI's Caritas Veritate, has greatly influenced his social thinking.

For 20 years, his ministry has blended deep devotion to his parish communities with Church work around the world, especially in areas of conflict. After being ordained Deacon in 1992, he spent 15 years serving Coventry Diocese. His Curacy was at All Saints Chilvers Coton with St Mary the Virgin Astley, in Nuneaton. In 1995 he became Rector of St James, Southam, a small market town in the same Diocese – and also the next year of St Michael and All Angels, Ufton, the neighbouring parish. He helped revive both churches, growing their congregations and launching bereavement and baptism teams, among other things. Between 2000 and 2002 he also chaired an NHS hospital trust in South Warwickshire. In 2002, he was made a Canon of Coventry Cathedral, where he ran the reconciliation work based there. With Canons Andrew White and Stephen Davis, he worked extensively in the field in Africa and the Middle East. He has a particular interest in Kenya, the DRC and Nigeria, where he was and remains involved in work with groups involved in conflict in the north. In the Niger Delta, he has worked on reconciliation with armed groups. He met with religious and political leaders in Israel and Palestine, and on one trip to Baghdad reopened the Anglican Church with Canon Andrew White, shortly after the allied invasion.  In 2006 he also took responsibility for Holy Trinity Coventry, the main city centre church, as Priest-in-charge.

He left Coventry five years later, being installed Dean of Liverpool on 8 December 2007, replacing the Right Reverend Rupert Hoare. Liverpool Cathedral is the largest cathedral in England. Its local area, Toxteth, is among the most deprived in north-west Europe. During his deanship, he brought the Cathedral into much greater contact with its local community, working with asylum seekers and in partnership with neighbouring churches. The Cathedral also hosted events from a TUC rally to royal services. Over his four years, during which he also continued to work on reconciliation and mediation projects overseas, the Cathedral’s congregation increased significantly.

In 2011, he returned to the place where his journey towards becoming Archbishop began: on 2 June 2011, he was announced as the new Bishop of Durham, taking over from the Right Reverend Tom Wright. He was enthroned at Durham Cathedral on 26 November, and drew parallels between Liverpool and Durham – noting both the struggles and the enduring spirit of the two places.

On 9 November 2012, the Right Reverend Justin Welby was announced as the 105th Archbishop of the See of Canterbury. He will succeed Dr Rowan Williams, who is retiring at the end of December after 10 years as Archbishop. He will be enthroned at Canterbury Cathedral on 21 March 2013. An expert on the politics and history of Kenya and Nigeria, he has lectured on reconciliation at the US State Department. In the summer of 2012, he was asked to join the Parliamentary Commission on Banking Standards.

His interests include French culture, sailing and politics

He is married to Caroline, who studied Classics at Cambridge, where they met. They have two sons and
three daughters.

Episcopal offices
Elected Bishop of Durham on 2 June 2011. Bishop Justin was consecrated at York Minster on 28 October and enthroned at Durham Cathedral on 26 November 2011.

Historically the central role, and the source of the archbishop's authority, is as Bishop of the Diocese of Canterbury (the local church of Canterbury. His diocese in East Kent has a population of 890,000 people and comprises 261 parishes in an area of nearly 1,000 square miles.

The Archbishop of Canterbury is the Primate of All England (the 'first bishop' of England), and shares several roles with the Archbishop of York. For well over a thousand years the distinction of the Diocese of Canterbury has given its bishop formal responsibility as a 'metropolitan' - the first among the bishops of a region. He has authority (also known as 'jurisdiction') at all times in the 30 dioceses of his Province - 29 in southern England, and 1 in Continental Europe. York has the same roles in relation to the 14 dioceses of his Province.

Based on his oversight in the Church of England, the Archbishop of Canterbury became the original sign of the unity of the bishops and local churches of the Anglican Communion - all 34 provinces in communion with See of Canterbury, a total of about 80 million members throughout the world which has developed over the last 200 years or so. He is the focus and spokesman of its unity today, but shares his oversight as president of the Communion with other bodies.

In the last two areas of dialogue and activity - Ecumenical relationships between Christian Churches, and Inter Religious relationships between different traditional world religions - the Archbishop has no formal authority. But his role in England and the UK, and his leadership in the Communion at large, give him significant influence and the responsibility to speak authoritatively for the faith and witness of the Church, the Anglican Church in particular.

Outline of procedures for the Appointment of an Archbishop of Canterbury:
Since 2007 the agreed convention in relation to episcopal appointments has been that the Prime Minister commends the name preferred by the Commission to the Queen. The second name is identified in case, for whatever reason, there is a change of circumstances which means that the appointment of the CNC’s recommended candidate cannot proceed. Once the Queen has approved the chosen candidate and he has indicated a willingness to serve, 10 Downing St announces the name of the Archbishop-designate. The College of Canons of Canterbury Cathedral formally elect the new Archbishop of Canterbury. The election is confirmed by a commission of diocesan bishops in a legal ceremony (the Confirmation of Election), which confers the office of Archbishop on him. The new Archbishop does homage to Her Majesty. The new Archbishop is formally enthroned in Canterbury Cathedral

Posted by David Hamid at 12:07
Email ThisBlogThis!Share to TwitterShare to FacebookShare to Pinterest