Conference on Protection of Religious Minorities set to begin in Marrakech 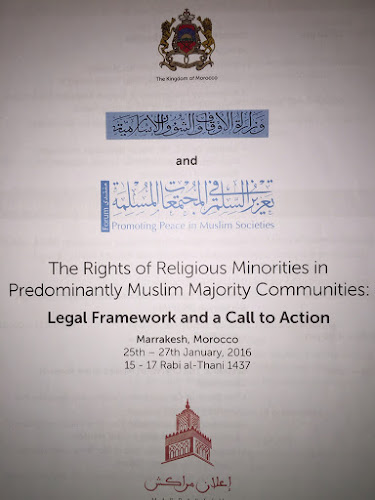 Over 300 Muslim scholars and government representatives from Muslim states are gathering in Marrakesh for a conference on religious minorities in Muslim lands. Some representatives of other faith groups have also been invited, including our Priest-in-Charge of St John's Casablanca, the Revd Canon Dr Medhat Sabry, and myself. The meeting is at the invitation of and is hosted by the Kingdom of Morocco.

The matter under discussion is an important one, and commentators have noted that this might be the first time in 1400 years that such an international group has gathered to address it: the thesis that protection of religious minorities is itself deeply rooted in and required by traditional Islamic law. For Christians living in countries such as Pakistan, Syria and Iran this is a vital issue. It is also of importance to other communities such as Yazidis in Iraq or Jews in Yemen.

The meeting gets underway tomorrow, 25 January and runs through until Wednesday 27th. The opening keynote message is being given by His Majesty King Muhammed VI of Morocco, who carries the title Leader of the Faithful.

Pray for fruitful and honest dialogue and for the emergence of a commitment and an agreement on the part of Muslim scholars and authorities present to strengthen and uphold this important tradition within Islam.

Posted with Blogsy
Posted by David Hamid at 19:18
Email ThisBlogThis!Share to TwitterShare to FacebookShare to Pinterest