From Iceland to Estonia, the clergy of the Nordic and Baltic Deanery have gathered in Riga, Latvia, for a chapter meeting, prior to the full deanery synod. "An Inclusive Church?" is the intriguing theme for the synod and the clergy are spending some time in prayer, bible study and fellowship, considering dimensions of this theme and the extent to which it is a challenge in the parishes they serve. In terms of national/ethnic inclusivity, the Deanery Chapter is very diverse indeed! I count 11 countries of origin for the priests and deacons of this part of the Church of England.

The chapter began with a tour of the historic old town of Riga, with a particular focus on the ecclesiastical history of this ancient city. St Saviour's Anglican Church has a prominent and historic place in the old town, within walking distance to ancient Churches of Roman Catholic, Lutheran and Calvinist traditions. St Saviour's is helpfully located on "Anglican Street". 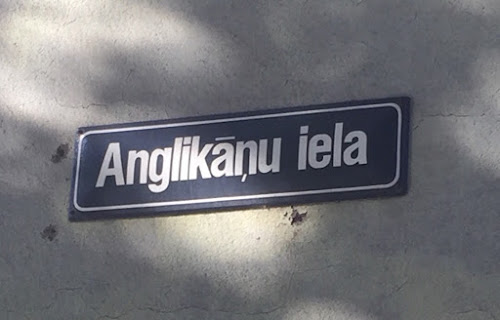 An introductory session was led by the Very Revd Karlis Zols, the Dean of the Latvian Evangelical Lutheran Church Abroad (LELCA) Deanery in Latvia. The LELCA is a Church in Communion with the Church of England, as a signatory to the Porvoo Agreement. The Latvian Evangelical Lutheran Church in Latvia, however, is not a member of the Porvoo family. Dean Zols gave an interesting overview of the history of the Latvian Lutheran Church which largely went into exile abroad (with its Archbishop) when the Soviet occupation of the country began. Many pastors who did not leave the country were deported to Siberia. In 1989 an Archbishopric IN Latvia was restored, hence the existence today of the two jurisdictions. The Latvian Church abroad jurisdiction now has 5 parishes back in the Latvian homeland itself.

Posted with Blogsy
Posted by David Hamid at 09:55
Email ThisBlogThis!Share to TwitterShare to FacebookShare to Pinterest