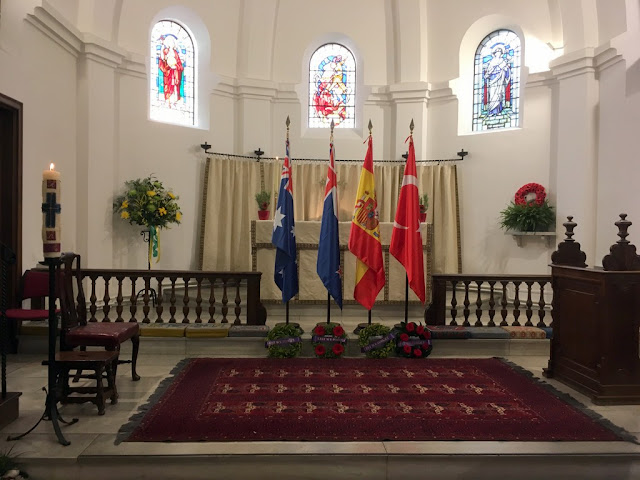 ANZAC Day falls on the 25 April each year. It is a commemoration to honour the members of the Australian and New Zealand Army Corps (ANZAC) who fought at Gallipoli against the Ottoman Empire during World War I. The Revd Canon Paul Ormrod from St George's Madrid reported that last Wednesday, possibly the first ever ANZAC day service was held in St George's in the Spanish capital. The event began with a conversation that Fr Paul had with someone who works at the Australian Embassy, who attended an event at St George's to promote the cricket team he plays for in Madrid!

The service was well attended with the Australian and New Zealand Ambassadors both making speeches.  The service also included a reading in Turkish and English by the Turkish defence attache. There were four national anthems - Australian, New Zealand (sung in Maori and English), Turkish and Spanish. Following the service, the refreshments included "Gallipoli biscuits"!
Fittingly, Fr Paul was joined in leading the service by Fr Richard Seabrook SSC, Chaplain at Torrevieja, who was for some years a Rector and then Archdeacon in Australia.

Posted by David Hamid at 18:08
Email ThisBlogThis!Share to TwitterShare to FacebookShare to Pinterest