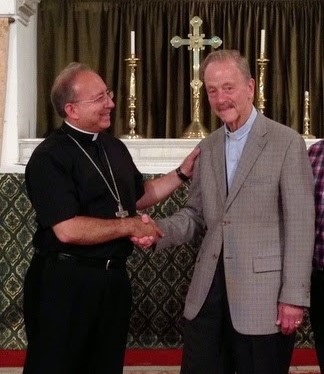 It is with great sadness that I announce the death of the Revd Joseph James Ponic. Known to everyone as Fr Joe, he died on 20 June in Saskatoon, Canada, after a brief illness. Fr Joe was a past Chaplain of St Andrew’s Tangier, and a priest who had served on our Diocesan Locum List for a number of years. He considered this diocese to be part of his family.

Joe was a citizen of the USA by birth and of Canada by adoption. He had a long ministry as a priest, first in the Roman Catholic Church, then in the Anglican Church of Canada where he rejoiced in its blend of tradition and openness.  In his own words, Fr Joe described the Anglican Church as “a wide gate that led to a nurturing environment”.  In his ministerial life he had specialised in what we now call “interim ministry”, using his gifts in helping parishes through times of change and transition. He also had a distinguished career as a teacher.

Fr Joe’s term in Tangier was at the time of a marked increase in the migrant and refugee population. Joe was profoundly moved by their plight and encouraged St Andrew’s to be alongside them and open their doors to those who needed pastoral care. He was deeply grieved when those seeking a better life in Europe died when their flimsy boats capsized off shore.

Former Churchwarden of St Andrew’s, Christopher Gibb, described Fr Joe as “Gentle Joe, a priest of many gifts, and one of the most precious was his capacity for healing local problems and misunderstandings. His wide reading and historical interests enlivened his sermons, sometimes leaving the congregation wide-eyed with wonder! He had a beautiful modesty, how rare and attractive is this!”

Joe was cremated on Thursday 21st and a memorial service will be held on Saturday 23rd June. May he may now find eternal rest and happiness in the company of the saints in light.

Posted by David Hamid at 15:42
Email ThisBlogThis!Share to TwitterShare to FacebookShare to Pinterest