Before a crowd of over 70,000 people, including Spain's former Queen Sophia, the Presidents of El Salvador, Panama, Chile and Italy, Pope Francis yesterday, 14 October, canonised 7 saints. Two will be well known to Anglicans: Archbishop Oscar Romero and Pope Paul VI. I was privileged to be present as part of the delegation of Anglicans attending the canonisation, headed by Archbishop Rowan Williams. After the mass in St Peter's Square the Pope expressed warm words of gratitude for our presence.

In his homily, Pope Francis spoke of Jesus inviting us to return to him, the source of joy, a courageous choice to risk everything to follow him. He reminded us of how St Oscar Romero, the Archbishop of San Salvador, left the security of the world, even his own safety, in order to give his life according to the Gospel, close to the poor and to his people, with a heart drawn to Jesus and his brothers and sisters. St Oscar Romero was shot and killed while celebrating mass on 24 March 1980, by a government sponsored death squad.
In my time as Mission Coordinator for Latin America and the Caribbean for the Anglican Church of Canada during the years of the civil wars in El Salvador and other Central American countries, I made many visits to the region, most often in support of those seeking to defend the human rights of the poor and exploited, including many priests and pastors in El Salvador. I recall meeting so many who were inspired by Oscar Romero to continue the struggle for justice for the poor of the region. In the hearts of the people of  Latin America Romero was already considered a saint;  "San Oscar de las Américas" they acclaimed him, almost right after he was assassinated. On the occasion of his canonisation, for the poor of the Americas this is a moment of great joy to have his martydom officially recognised by the Church. I never imagined I would be present to witness this event.

With regard to St Paul VI, Anglicans will know that it is thanks to this Pope that we entered into formal dialogue with the Roman Catholic Church. Following the historic visit of Archbishop Michael Ramsey to Pope Paul VI in 1966 (at which the Pope gave the Archbishop his own episcopal ring) ARCIC was established: "a serious dialogue which, founded on the Gospels and on the ancient common traditions, may lead to that unity in truth, for which Christ prayed". Today we recognise that ARCIC has produced ground-breaking agreed statements on the Eucharist and Ministry which have received the highest level of reception by the Churches of the Anglican Communion.  ARCIC continues its work on theological issues, and now, because of the significant progress made, a complementary commission, IARCCUM, was established in 2001 "to  translate our manifest agreement in faith into common life and mission". We have much for which to thank Pope St Paul VI. 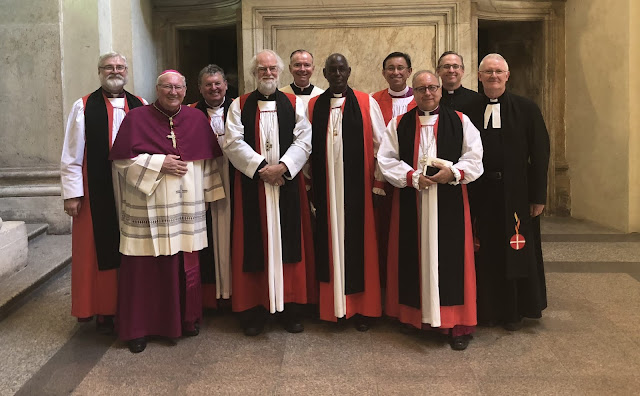 Photos courtesy of the Anglican Centre in Rome
Posted by David Hamid at 09:10
Email ThisBlogThis!Share to TwitterShare to FacebookShare to Pinterest