The diversity of ordained ministry in St George's Madrid

The Diocese in Europe, even though part of the Church of England, is not very English at all. In fact, it is a particular privilege as a bishop to be able to accompany congregations as they grow and develop in response to the challenges of multicultural and multinational ministry.
St George’s Madrid was once called "the British Embassy Church of St George". Today it is like so many of our churches in capital cities: a magnet for people from every part of the world who use English as a first, second, or even third language and who are seeking a church home.
Many years ago I had the pleasure of a meeting with a dozen or so members of the church who are originally from Nigeria. They spoke to me with great pride that one of their own compatriots was wanting to become a priest. That began a long journey of discernment and training for Solomon Ike. 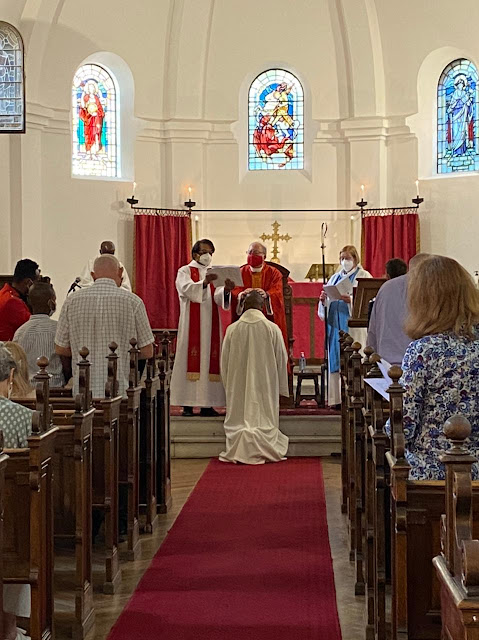 The ordination of Solomon in St George’s Madrid on 30 May opens new and greater possibilities for wider outreach to Anglicans from the African continent. The Chaplain, Canon Dr Medhat Sabry, is already from Africa (Egypt). Deacon Solomon brings further links to people from sub-Saharan Africa, as he is passionate about extending the reach of pastoral care and spiritual support to the Nigerian community in particular.
The British who established St George's perhaps did not know what a blessing they were giving to the city in building a Church that would not only serve them but grow to embrace Christians from around the world.

Posted by David Hamid at 16:47
Email ThisBlogThis!Share to TwitterShare to FacebookShare to Pinterest