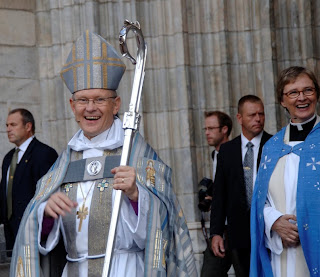 It has been quite a week for ecumenical news. First the announcement of the Apostolic Constitution from Rome last Tuesday. Then last Thursday the General Synod of the Church of Sweden voted 176 to 73, to allow same-sex church weddings.
The Church of Sweden, the established Church until 2000, has about 7 million members or 75% of the national population. It has been offering blessings of same-sex registered partnerships since 1995 and in 2007 approved a special liturgy for this. However, Swedish marriage law changed on 1 May, and registered partnerships were abolished in favour of gender-neutral marriage. The Church was thus faced with a decision about what the change means for its understanding of marriage. Earlier this year, two Church of England Bishops, Christopher Hill and John Hind, who chair the Council for Christian Unity and the Faith and Order Advisory Group, respectively, wrote to Archbishop Anders Wejryd of Uppsala (pictured above), pointing out that a decision to expand the theology of marriage to include same-sex couples risked creating immediate and negative consequences for ecumenical relations.
The Church of England is in communion with the Church of Sweden through the Porvoo Agreement which brings the British and Irish Anglican Churches into communion with 6 Lutheran Churches in the Nordic and Baltic countries. Our Diocese in Europe has major congregations in Stockholm and Gothenburg and 6 other smaller congregations throughout Sweden. In addition, the Diocese in Europe is twinned with the Swedish diocese of Visby.
Like the Church of Sweden (and other Porvoo Churches), the Church of England is facing a complex set of challenges with regard to issues in human sexuality. We are trying to find ways to balance a pastoral response to changes in society and in civil law while remaining faithful to the Bible and our received teaching about Christian anthropology and holy matrimony. Furthermore we are aware of our mutual accountability to those around the world with whom we live in sacramental communion. For these reasons the Swedish Church's decision is not one that the Church of England would feel able to make. Our Church of England clergy in Sweden are in a key position. On the one hand they know their Swedish colleagues well and seek to understand more fully the particular contextual challenges faced by a sister Church. On the other hand, they are well aware of the ecumenical and theological difficulties raised by the decision just made and are able to present and interpret the distinct view of the Church of England.
The Porvoo Agreement commits the signatory Churches to appropriate forms of consultation on significant matters of faith and order, life and work. However, such a consultation has not happened on the matter of gender-neutral marriage.
Both civil law and the Church of Sweden decision provide that no individual priest will be obliged to act against his or her conscience.

Posted by David Hamid at 09:07
Email ThisBlogThis!Share to TwitterShare to FacebookShare to Pinterest