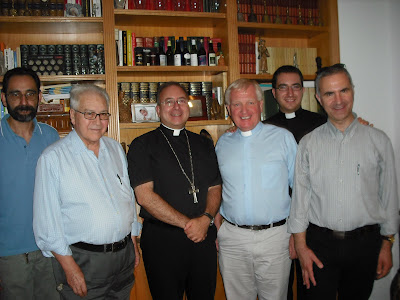 Ecumenical relations between Anglicans and Roman Catholics are in excellent shape in Almuñécar. During my recent parish visit to our Diocese in Europe congregations in Nerja and Almuñécar, the Revd Geoff Johnston, the priest-in-charge, and I were offered hospitality by the Roman Catholic clergy team which serves the Almuñécar and Herradura parishes. Over a splendid lunch of tapas and rabbit paella, we explored a range of issues touching upon the life of our Churches including vocations to the sacred ministry, work with young people, ecumenical relations between Roman Catholics and Anglicans in England, Muslim-Christian relations and liturgical renewal. Our Roman Catholic colleagues were keen to know how decisions taken by some bishops and dioceses in the USA, particularly on the matter of same-sex blessings, were affecting the life of the Anglican Communion. This led to an honest discussion about how authority is regarded (or disregarded!) in our respective Churches. We also found much common interest in the spiritual teachings of St John of the Cross and St Teresa of Avila. Our Roman Catholic colleagues appreciate the writing and study on these two saints that is being undertaken by English scholars. Our hosts were fascinated by aspects of English Church history and how, in the established Church of England, the Prime Minister and Crown have a role to play in the appointment of bishops. I learned that it was not so long ago that the Spanish monarchy played a role in the Spanish Roman Catholic Church not unlike the present role of the Queen in the Church of England.
In 2011 the (Roman Catholic) World Youth Encounter comes to Madrid. The diocese of Granada along with the other Spanish dioceses will host young people from all over the world in local churches before they journey together to Madrid. Over lunch we explored how Anglicans (with their English language skills) might assist the Roman Catholic Diocese of Granada as they host young people in the pre-Madrid visit. Fr Geoff and Fr Antonio have already begun a monthly Taizé prayer service with youth from both traditions taking part.
In the photo from left to right: Padres Rubén, Eugenio, Antonio and Miguel, with myself and Fr Geoff Johnston in the middle.

Posted by David Hamid at 22:53
Email ThisBlogThis!Share to TwitterShare to FacebookShare to Pinterest