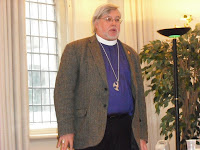 The Convocation website lists 8 parishes and 7 mission congregations, and is constitutionally part of the Episcopal Church, the United States based Province of the Anglican Communion. The Convocation sends 4 clergy and 4 laity (along with its bishop) to the triennial General Convention in the USA.

Reflecting on the General Convention which met this year in Anaheim California, Bishop Pierre stated that the Episcopal Church's mind on blessing gay unions and on ordaining partnered gay people is divided. Despite what was widely reported, according to the bishop the General Convention did not end the moratoria on same-sex blessings and ordinations of homosexual, non-celibate, bishops. However it did approve an open process for the consideration of theological and liturgical resources for the blessing of same sex relationships and encouraged a “generous pastoral provision”.
Posted by David Hamid at 00:10
Email ThisBlogThis!Share to TwitterShare to FacebookShare to Pinterest