Archbishop of Canterbury's visit to Athens 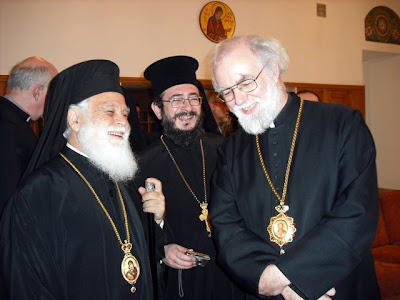 Abbot of Penteli, Archimandrite Ignatios from the Greek Church Office at the EU, and Archbishop Rowan
From 25 to 28 November the Archbishop of Canterbury paid a pastoral and fraternal visit to the (Greek Orthodox) Archdiocese of Athens, at the invitation of His Beatitude Ieronymos, the Archbishop of Greece and All Greece.

The visit was to strengthen the already profound friendship between the Church of England and the Church of Greece and to learn more about the witness and outreach programmes of the archdiocese. There is already a recognition of many common pastoral issues that the two Churches are facing. During his visit Archbishop Rowan spoke of the dedication of the Church to those in need, especially the poor, "In times of economic crisis and poverty our common witness is becoming increasingly important".

The Revd Canon Malcolm Bradshaw, Senior Chaplain of the Greater Athens Chaplaincy, is also the Archbishop of Canterbury's Apokrisiarios, or representative to the Greek Archbishop. Fr Malcolm was heavily involved, alongside his colleagues in the Greek Orthodox Church, in preparations for the visit, and accompanied the Archbishop throughout. Already there is close cooperation between St Paul's Anglican Church and some of the outreach projects of the Archdiocese, particularly the "Church in the Street" programme for migrants, a centre for those with Downs Syndrome, and the emerging hospice movement in Athens.

The itinerary included meetings with key politicians (the President, Prime Minister, Education and Religious Affairs Minister and Deputy Foreign Minister), as well as with Archbishop Ieronomos and members of his synod, and many projects of the Church. During his visit Archbishop Rowan was awarded an honorary doctorate by the University of Athens (photo below). 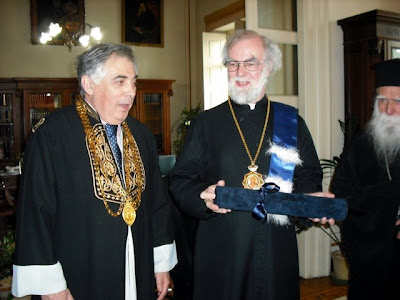 This was the third such official visit by an Archbishop of Canterbury: (Dr Michael Ramsey visited in 1962, and Dr George Carey in 1996). The warmth of this visit was evident. I felt very proud at several moments when our Greek partners spoke enthusiastically of the effective ecumenical engagement of Canon Bradshaw, who is clearly an excellent ambassador for the C of E in Greece.

Canon Bradshaw is in the photo below in conversation with the Greek Deputy Foreign Minister, Mr Dimitris Dollis. 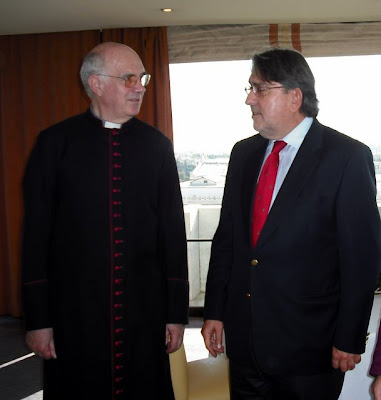