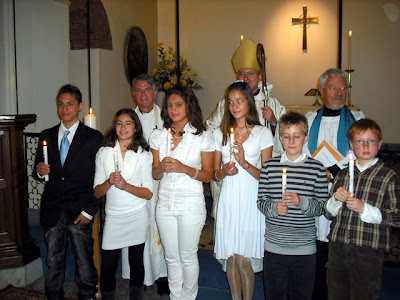 Ticino is the Italian speaking Canton in the Swiss Federation and in the city of Lugano can be found a thriving Church of the diocese, St Edward the Confessor. The parish priest is the Revd Andy Horlock. The Reader, Mr Bob Gebhardt, is also one of the Churchwardens. Six young people were confirmed on Sunday 31 October, from left to right: Alessandro, Fiona, Camilla, Gabriela, Philip and Edo. A festive lunch followed which included the largest cake I have encountered in a while!

Anglican worship has been held in Lugano for over a century. The Church itself was consecrated in 1902. Among the features in the interior is a 12th century Venetian holy water stoup which is now the baptismal font. Worshippers on Sunday 31 October were delighted to find new seating when they arrived, a generous gift from a member of the parish. 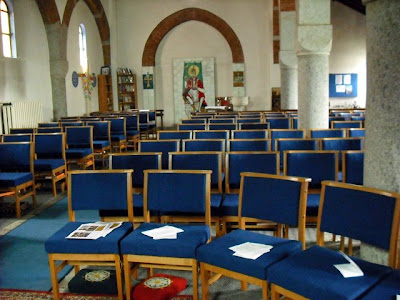 Posted by David Hamid at 11:28
Email ThisBlogThis!Share to TwitterShare to FacebookShare to Pinterest