Please read below an urgent message from the Chaplain of Christ Church Amsterdam, the Revd Mark Collinson: 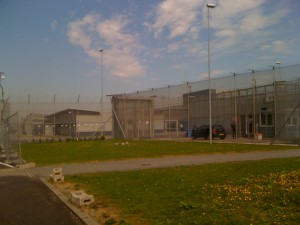 David Mukasa has been part of the community of Christ Church Amsterdam since 2003, when I first got to know him. He had escaped from custody in Uganda having been detained after writing letters to a newspaper objecting to the government’s land reforms. His political opposition have put him on the wanted list in the eyes of the Ugandan government. His attempts at seeking asylum in the Netherlands have failed. He has lived as an illegal delivering newspapers, paying his rent, and supporting his family, which at various times have visited the Netherlands from Uganda.  David is a committed Christian, having been brought up in a clergy family. His father, Canon Mukasa, is old and frail and cannot actively help his son. We believe there is no reason why David should not be allowed to live peaceably either in the Netherlands or Uganda. The Dutch Immigration Authorities think otherwise.

They were happy for him to live here illegally, until David was detained in the Netherlands on 12th October 2010 after being asked for ID whilst he was on a bus travelling back to his home in Old Amstelveen. He was detained in Zeist. Just over a week ago he was transferred to the detention centre at Schiphol Airport and he has now been booked on a flight back to Uganda on Friday 20th May. The Dutch Immigration Authorities do not consider the present political unrest in Uganda a threat to David’s life. We know that people who are critical of the present Museveni government are being arrested without charge and detained.

We are aware that the Ugandan authorities want David arrested. We do not know why. His name is listed amongst the top 15 people which immigration officials have at every entry point in Uganda.  We fear that when he arrives in Uganda he will be taken into custody by President Museveni’s special police and no charges will be publicly brought against him, which can be considered by a court. The freedom to criticise the government (in relation to land reforms which took place over eight years ago) does not appear to be tolerated in Uganda.

Please pray for David’s safety and the ability to live in freedom and in peace, without fear.

Please refer to this webpage for up to date information as and when we receive it from contacts here and in Uganda.

Please pass on his details to friends, via social networks, so that people are aware of his situation.

Mark Collinson
Posted by David Hamid at 17:34
Email ThisBlogThis!Share to TwitterShare to FacebookShare to Pinterest