A requiem mass for the Revd Canon Dr Roger Greenacre was celebrated on Friday 23 September in Chichester Cathedral. Canon Greenacre, was a residentiary canon of Chichester Cathedral for 25 years, from 1975 to 2000. Prior to that he was chaplain of St George's Paris, and from 2000 to 2010 was priest-in-charge of St Michael's Beaulieu-sur-mer. He died in July.

Clergy from the Diocese in Europe, Chichester, and elsewhere in the Church of England, members of the Order of St Lazarus, and Roman Catholic guests from the Abbeys of Bec-Hellouin and Chevetogne were present at the service. The Archbishop of Canterbury sent a message describing "the life of a priest of rare quality". Archbishop Rowan noted the important work of Fr Roger in building bridges between Anglicans and Roman Catholics, especially on the continent of Europe. Among his many gifts to the Church is an invaluable guide to the Roman Catholic Church in France, first published in 1996.

Significantly, and underlining Fr Roger's life-long commitment to ecumenism, His Eminence Cardinal Jean Louis Tauran, (below, centre) was present and delivered a moving tribute at the end of the mass.

Fr Roger's ashes were interred in the Paradise Lawn of the cathedral. 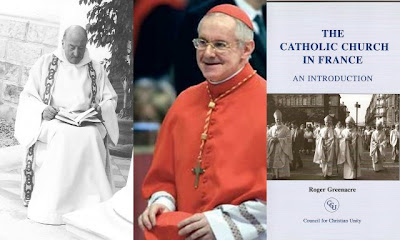 Posted by David Hamid at 02:13
Email ThisBlogThis!Share to TwitterShare to FacebookShare to Pinterest