The clergy of the Nordic / Baltic deanery met outside Gothenburg, Sweden on 28 - 30 September. Priests from Norway, Sweden, Denmark, Estonia and Finland were present and among the topics discussed was  the implications for our Diocese of the Ecclesiastical Offices (Terms of Service) Measure 2009, which came into force in the Church of England on 31 January 2011.  For the sake of our licensed clergy beyond the Nordic/Baltic Deanery, here is a summary of those implications:

The Measure gives clarity to the rights, responsibilities and accountabilities of the clergy, who are not employees but office holders. It brings the status of the clergy onto a more equal basis known as common tenure. Previously, in England there was a range of "employment status" depending, for example, on whether a priest had the freehold or was on a fixed term appointment or a priest-in-charge, team rector, team vicar, assistant priest etc. The Measure preserves the traditional concept of “cure of souls” and the relationships between priest and people on the one hand, and priest and bishop on the other. Common tenure provides a framework for clear Terms & Conditions of Service, such as entitlement to stipend, expenses of office, rest periods and holidays, pension provision and housing.

There was never any freehold in the Diocese in Europe, and framing the deployment of the clergy according Terms & Conditions of Service is something we have had in place for a long time, so this part of the legislation will not require much adjustment to our present practice. There are some new aspects, however, which now apply to the Diocese in Europe clergy:
The law of England does not apply on Continental Europe, of course, so these aspects of the legislation have force under an Archbishop's Instrument, as provided for by our constitution. 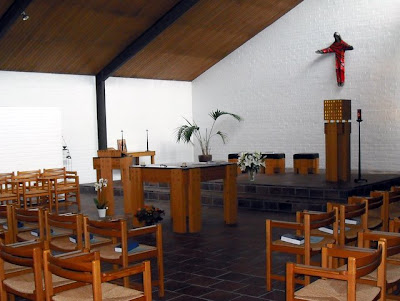 Posted by David Hamid at 23:58
Email ThisBlogThis!Share to TwitterShare to FacebookShare to Pinterest