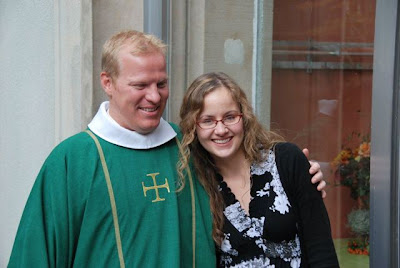 The Chaplain of St Andrew's Zurich, the Revd Canon John Newsome, reported on a celebration of Harvest Festival last Sunday 2nd October. Over 200 people attended the service when the congregation also said good-bye to the Revd Dan and Teresa Morrow. Fr Dan has been the Assistant Chaplain for the past three years and came to Zurich from the Diocese of Los Angeles.

During his time in St Andrew's he won the hearts of many with his radiant smile and warm-hearted nature. His ministry was especially appreciated by  the children and teachers of Junior Church and by the youth of the  parish. (Fr Dan built up the youth group from the beginning). He also has primary pastoral care of three daughter communities. Dan was also an enthusiastic and valued participant in the Diocesan Post Ordination Training Programme, run by the Director of Training, the Revd Ulla Monberg.

Dan and Teresa's stay in Switzerland was somewhat frustrated by problems with the Swiss immigration and labour authorities. They are both US citizens and since the bilateral arrangements between Switzerland and the EU have come into effect it has become more difficult for non-EU citizens to live and work in Switzerland but easier for EU citizens. There was time last autumn when a two week vacation turned into 6 weeks as there was difficulty getting re-entry permission into Switzerland!

Dan has now completed his three year contract and is moving to become Rector of St Paul's Church Oregon City, in Oregon diocese in the USA. We wish him and Teresa evey blessing for the challenges ahead. We have all be greatly blessed through his presence in St Andrew's and with his ministry here in the Diocese in Europe. 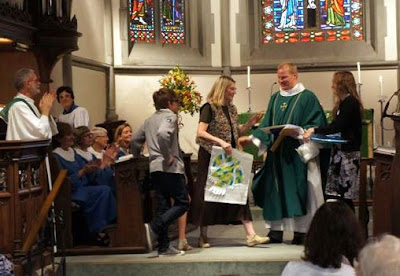 Posted by David Hamid at 10:23
Email ThisBlogThis!Share to TwitterShare to FacebookShare to Pinterest