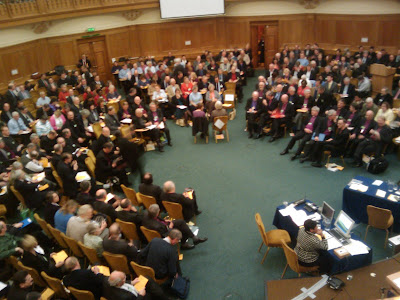 I have already reported that at the recent February group of sessions of the General Synod, first consideration was given to our Diocese in Europe Measure, the primary purpose of which is to allow the Church Commissioners and the Archbishops’ Council to apply funds for the development of the mission of our diocese. The draft Measure now goes to a Revision Committee.


But the General Synod acted on some other important matters too:


Women in the Episcopate
An illustrative draft Code of Practice was presented; the Synod took note of a report from the Business Committee on the outcome of the reference to the dioceses; and the Synod debated a diocesan synod motion from Manchester (also passed by several other dioceses) and a substantial amendment to that motion from the diocese of Southwark. The result was an  acceptance of the Southwark amendment (itself in a slightly amended form), so that the motion as passed called on the House of Bishops ‘in the exercise of its power under Standing Order 60(b) not to amend the draft Measure substantially’.

What next?
The draft legislation is now sent to the House of Bishops which will consider any amendments in May. It remains to be seen how any amendments they make will be judged to be substantial or not. At the July Sessions of General Synod in York final approval for the legislation could, in theory, be reached. A two-thirds majority in each House of the Synod is required for the Final Approval of the draft measure. After final approval, the timing passes out of the hands of Synod and over to Parliament. There are three parliamentary stages: consideration by the Ecclesiastical Committee, debate in the House of Commons and debate in the House of Lords. If Parliament were to conclude consideration of the legislation in time for Royal Assent to be given by December 2012, the House of Bishops could work on the Code of Practice to bring to the Synod for consideration in February 2013. Subject to receipt of the Royal Assent and Licence for the Amending Canon, it is possible for the promulgation of the Amending Canon to occur in July 2013. However, this is the earliest possible date and is dependent both on decisions that the Synod itself and its various Houses have yet to take and on how quickly Parliament and Her Majesty’s advisers respectively would be able to deal with the Measure and the Amending Canon.
Clergy Discipline Measure
The Synod completed the Revision Stage for amendments to the Clergy Discipline Measure. The major amendment is to allow disciplinary proceedings to be brought against clergy who are members of, or otherwise support, organisations which have been declared by the House of s to have aims which are inconsistent with the teaching of the Church of England on race equality.
Liturgical Business
Additional Eucharistic Prayers for use when a significant number of children are present were referred to the House of Bishops which will decide in May whether to amend the texts in any way and whether to return them to the Synod for Final Approval.
Posted by David Hamid at 10:00
Email ThisBlogThis!Share to TwitterShare to FacebookShare to Pinterest