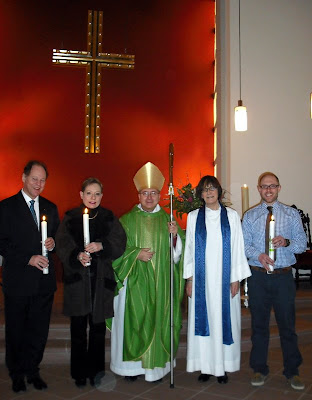 The English Church in Heidelberg continues to celebrate the 40th anniversary of its refounding in 1971. However, Anglican services have been held in the city as far back as 1613. In that year, Princess Elizabeth, the daughter of James I of England (VI of Scotland), moved to join her new husband the Elector Palatine Friedrich V. From that time, the chapel in Heidelberg Castle became an Anglican place of worship (and apparently still is!).

The present congregation shares the Old Catholic Church of the Redeemer, a former chapel of a Dominican  Convent, which had been the Anglican Church from 1847 to 1914. No regular Anglican services were held in Heidelberg from 1914 to 1971. The Church of England gave the building to the Old Catholics in 1936.

The congregation is led by the Reader in Charge, Dr Rosemary Selle, (2nd from right, above) with eucharists provided by locum priests and occasionally by the Old Catholic priest. As a congregation which is entirely dependent on the laity for its organisation and administration, no less than 7 former members have discerned a vocation and subsequently been ordained to the priesthood since 1990!

Last Sunday was a joyous occasion for the confirmation of two members and the reception of another (from the Roman Catholic Church).

The website is here.
Posted by David Hamid at 09:29
Email ThisBlogThis!Share to TwitterShare to FacebookShare to Pinterest