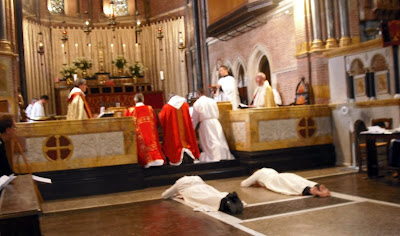 "You cannot bear the weight of this calling in your own strength, but only by the grace and power of God". Following these words of the ordination liturgy, Mary Styles and Dana English, who were about to be ordained as deacons, prostrated themselves for silent prayer, followed by the ancient hymn Veni Creator Spiritus and the solemn litany sung by the deacon of the mass, the Revd Frances Hiller.

Laying on the marble floor of All Saints Church was probably the coolest place in the service. It was 39 degrees Celsius in Rome for the ordination on Sunday 1 July, a steamy day, even by Roman standards. But the heat was felt to be a sign of the Spirit which moved through the packed Church.

Members of the neighbouring (American) Episcopal Church of St Paul's attended, along with their priest, the Revd Austin Rios. Mother Teodora Tosatti and members of the Old Catholic Community were present along with visiting clergy from the Roman Catholic and Methodist Churches. 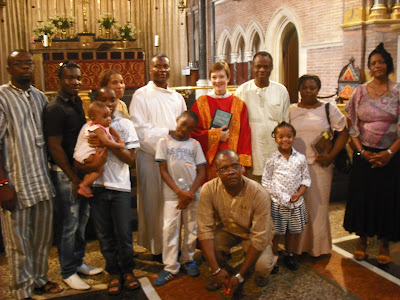 The daughter congregation of St Mary at the Holy Cross, Macerata, a flourishing Nigerian community served from All Saints, Rome, were in attendance, with their lay minister Shedrak Iheanyiogu. They supplemented the music of the fine All Saints choir with some traditional Nigerian songs. 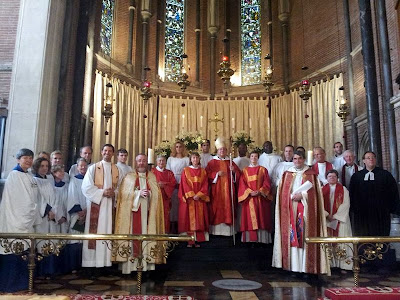 The Revd Mary Styles and the Revd Dana English, the two new deacons, will serve as assistant curates in All Saints Rome, under the supervision of the Venerable Jonathan Boardman, the Chaplain and  Archdeacon of Italy and Malta. Mary also has responsibility for a new Fresh Expression of Church, "Footsteps", which meets in the suburbs of Rome. All Saints is a multicultural congregation. Two of the youngest members of the servers' guild are twin boys from Pakistan, shown below with their parents. 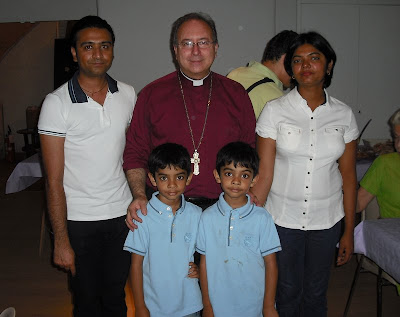 The preacher for the service was the Very Revd David Richardson, the Director of the Anglican Centre in Rome and the Archbishop of Canterbury's representative to the Holy See. A festive lunch followed the service in the crypt of All Saints. 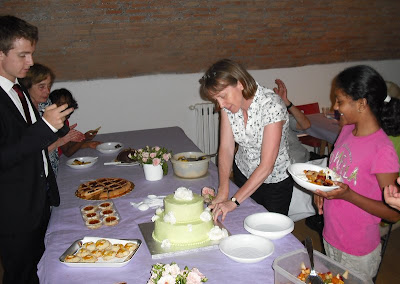 Posted by David Hamid at 23:40
Email ThisBlogThis!Share to TwitterShare to FacebookShare to Pinterest