I experienced this as a sad week in the diocese as there were two memorial services here in London for two of our own clergy who have died this summer, the Revd Keith Gordon and the Revd Verna Veritie. 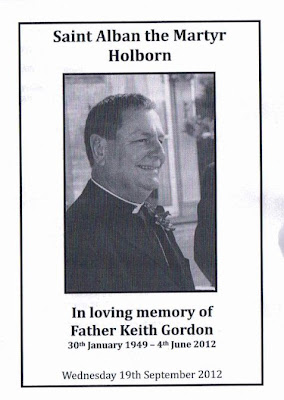 On Wednesday, in the Church of St Alban the Martyr, Holborn, friends and family gathered to remember Fr Keith. He was the priest-in-charge of St Francis Parish in Tenerife South and died of cancer on 4 June. The preacher at the service was the Revd Idris Jones, who had been a colleague of Fr Keith's on the neighbouring island of Lanzarote. 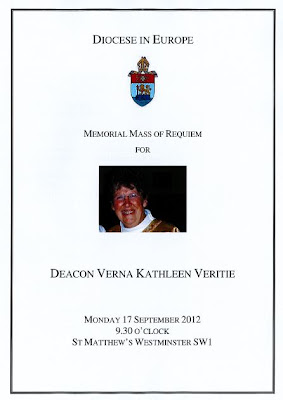 On Monday in St Matthew's, Westminster, the Ministry Team of the Diocese held a requiem for Deacon Verna. She was newly ordained and was in the early weeks of her work as assistant curate in St Paul's Athens when she died on 30 August. There is a further memorial for Verna to be held in Scotland on Sunday 30 September. Her ashes will be interred, following a requiem, at St George's Lisbon where she served as a reader, on Saturday 13 October.

Have mercy, O Lord, upon the souls of Keith and Verna. Given them eternal rest, let light perpetual shine upon them, and may they rest in peace; through Jesus Christ our Saviour. Amen.
Posted by David Hamid at 12:18
Email ThisBlogThis!Share to TwitterShare to FacebookShare to Pinterest