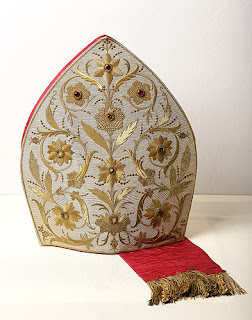 On Wednesday of this week, the House of Bishops, by an overwhelming majority, agreed the text of the clause in the legislation on women bishops which they were asked to reconsider by the General Synod in July. The text will now be presented for final approval by the General Synod in November. The House of Bishops made clear its desire for the draft legislation to be passed into law. Speaking on behalf of the House at the conclusion of their meeting the Archbishop of Canterbury Dr Rowan Williams said:

“Since women were first made priests in the Church of England in 1994, their ministry has hugely enriched both church and society. It has become increasingly clear to most of us that barring women from becoming bishops is an anomaly that should be removed, for the good of the Church’s mission and service.

In July this year, the General Synod asked the House of Bishops to reconsider an alteration it had made to the proposed legislation on this subject. The Bishops have taken very seriously the anxieties expressed about the possible implications of their amendment and there has been widespread consultation since then. We are very grateful for all the points and suggestions offered by synod members and others.

In light of this consultation, the Bishops have discussed the measure again and are now bringing forward a new text that expresses both our conviction of the need to see this legislation passed and our desire to honour the conscience and contribution of those in the Church of England whose reservations remain.

It is particularly significant and welcome that the new text emerged not from the House of Bishops itself but rather from a serving woman priest.

I hope all members of Synod will now reflect carefully on what the Bishops have decided and will continue to give thought and prayer to how they will vote in November. I am convinced that the time has come for the Church of England to be blessed by the ministry of women as bishops and it is my deep hope that the legislation will pass in November.”

For the legislation to pass in November, it will require a two thirds majority in each of the Houses of Bishops, Clergy and Laity. Our delegates to General Synod are:

The official press release can be found here. A podcast from the Archbishop of Canterbury on this issue can be heard here.

Posted by David Hamid at 00:33
Email ThisBlogThis!Share to TwitterShare to FacebookShare to Pinterest