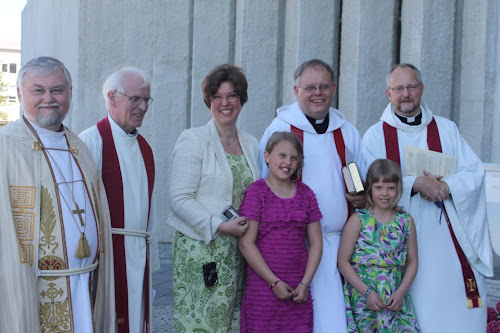 The most northerly congregation in our Diocese in Europe became officially known as the Congregation of St Thorlak, on 29 June, the feast of SS Peter and Paul. The Reverend Bjarni Thor Bjarnason was licensed as Priest-in-Charge of the congregation by the Archdeacon of Germany and Northern Europe, the Venerable Jonathan LLoyd.

Pictured above left to right are the Rt Revd Kristjan Valur Ingolfsson (Bishop of Skalholt), the Very Revd Birgir Asgeirsson (Dean of Reykjavik), the Revd Maria Agustsdottir (wife of Bjarni), the Revd Bjarni Thor Bjarnason (with their two daughters), and Archdeacon Jonathan LLoyd.

Fr Bjarni is Vicar of Seltjarnarnes Church on the west side of the city and leads the Anglican Congregation of St Thorlak (in English) at 2pm on the last Sunday of each month at the city centre Hallgrimskirka. Two churchwardens have been elected, Guy Stewart (originally from Canada) and Thorgerir Lawrence (Anglo-Icelandic), and Bjarni now becomes a member of the Nordic/Baltic Deanery Chapter and Synod.

Fr Bjarni developed close links with the Church of England after serving a curacy at Scunthorpe in the Diocese of Lincoln, soon after the Porvoo Communion came into being. St Thorlak (1133-1193), the Patron Saint of Iceland, studied in both Paris and Lincoln, and is comemorated on 23 December.

Incidentally, Bishop Kristjan was a guest at the General Synod of The Church of England this weekend at York. As two of the three Bishops of the Evangelical Lutheran Church of Iceland are women, I am sure he must have found the debate very interesting! 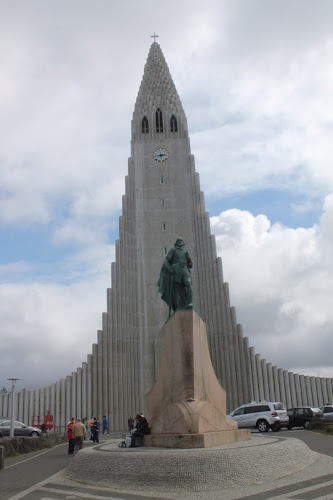 Posted with Blogsy
Posted by David Hamid at 10:31
Email ThisBlogThis!Share to TwitterShare to FacebookShare to Pinterest