Nigerian Archbishop with links to our Diocese has been kidnapped 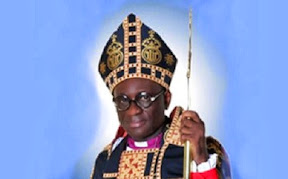 A Nigerian Anglican Archbishop, one of two who visited our diocese earlier this year, has been kidnapped by armed men on Friday 6 September. The Most Revd Ignatius Kattey and his wife Beatrice were kidnapped near their residence at Eleme, Port Harcourt, last Friday 6 September.

Archbishop Ignatius is the Dean of the Nigerian Church, and Archbishop of the Niger Delta Province, and the second most senior Anglican bishop in the country. According to reports, the kidnappers abandoned the Archbishop's car containing Mrs Kattey after a police chase. The Archbishop is still missing.

Archbishop Ignatius accompanied Archdeacon of Italy and Malta Jonathan Boardman on visits to Turin and Padua last April, and along with his colleague Archbishop Joseph Akinfenwa came to my office afterwards to report on their visit and explore with me how our partnership and cooperation might be deepened.

Apparently, no group has claimed responsibility and no ransom demand has been made.

Please pray for the safe release of the Archbishop.

- Posted using BlogPress from my iPad

Posted by David Hamid at 17:27
Email ThisBlogThis!Share to TwitterShare to FacebookShare to Pinterest