On 13 December 304 a young Christian woman called Lucia was martyred in Syracuse, Sicily. She refused to marry a pagan nobleman and make sacrifices to the emperor Diocletian. The spurned prospective groom reported her to the authorities. She was killed in a horrid death which included the gouging out of her eyes, which were held to be particularly beautiful.

According to the Julian calendar used in Sweden until 1753, the night between the 12th and the 13th of December was Midwinter, the longest night of the year, when it was thought that extra protection was needed from the darkness of the world. As St Lucy's or Santa Lucia's name and story reached Sweden, it took deep roots in the culture of the land and her her feast on 13 December is celebrated as a powerful symbol of the light of the world, that "light which shines in the darkness, and the darkness has not overcome it" (St John 1.5). 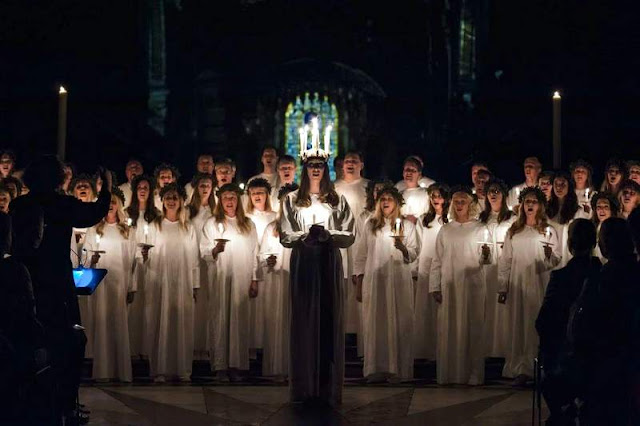 Each year in London, the Swedish community celebrates Sankta Lucia. I am always invited to participate by Fr Michael Persson, the Dean and Rector of the Swedish Church in London and a close friend. It is a warm sign of our close links through the Porvoo Communion. Last night's noving celebration was in St Paul's Cathedral, with over 2000 in attendance. Other clergy, besides the Dean and members of the Chapter of St Paul's, included the priest of the Latvian Church, the Revd  Eliza Zikmane, the priest of the Norwegian Church, the Revd Torbjørn Holt, and the Revd Clare Dowding, rector of St Paul's North Marylebone.

St Lucy's celebration is a time to pray for light in darkness, for hope this winter for all who need that light, especially all refugees and victims of war.


God our redeemer, who gave light to the world that was in darkness by the healing power of the Saviour's cross: shed that light on us, we pray, that with your martyr Lucy we may, by the purity of our lives, reflect the light of Christ and, by the merits of his passion, come to the light of everlasting life.


Posted by David Hamid at 10:42
Email ThisBlogThis!Share to TwitterShare to FacebookShare to Pinterest