Worthy! Panta axia! The shout of the congregation when Deacon Christine Rosamund Saccali is ordained in Athens 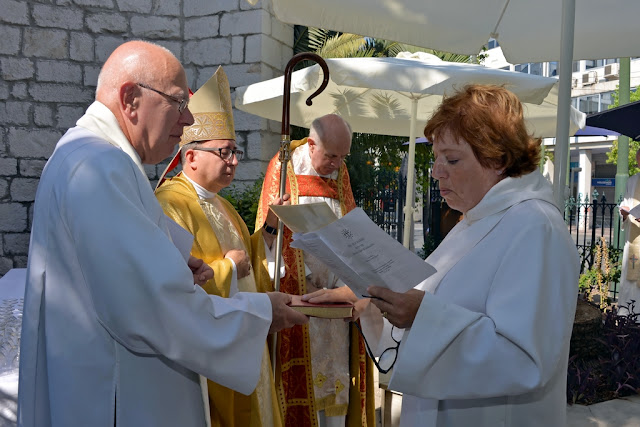 Under some shade in the patio of St Paul's Church in Athens, where the temperature was in the mid-30s, the solemn declarations and oaths required of those entering Holy Orders were taken by Christine Saccali on Sunday 3 July, the day of her ordination to the diaconate. Archdeacon of the East, the Venerable Colin Williams, was on hand to witness to these legal preliminaries to the ordination rite itself. 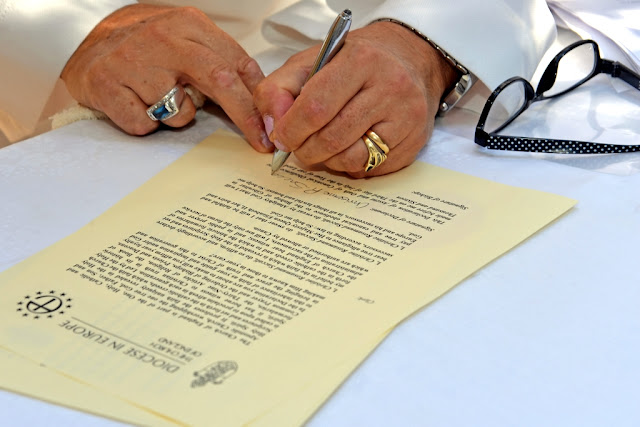 The lessons at the ordination service were read by parish Reader Sherri and British Ambassador to Greece, HE John Kittmer. Deacon Frances Hiller, my chaplain, was the preacher for the occasion and the deacon of the mass, a most appropriate role as Frances, like Christine, was a Reader before her calling to the distinctive diaconate became clear. 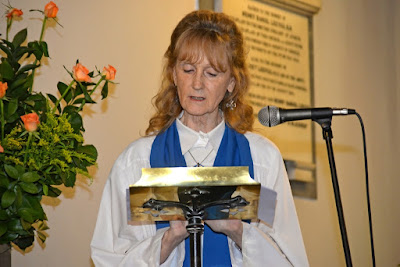 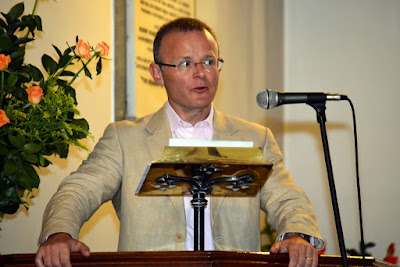 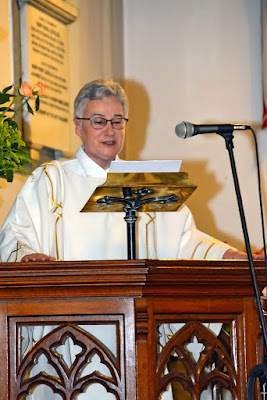 The heart of the ordination liturgy is the laying on of hands with prayer. But just before this moment the ordinand lies prostrate before the altar. Prostration is an ancient biblical sign of humility, attested to in the Book of Deuteronomy, signifying that the ordinand is completely dependent upon God, as the ordinal says “you cannot bear the weight of this calling in your own strength, but only by the grace and power of God”. During the prostration the hymn Veni Creator Spiritus and the litany are sung, in which the community invokes the grace and strength of the Holy Spirit on the ordinand. 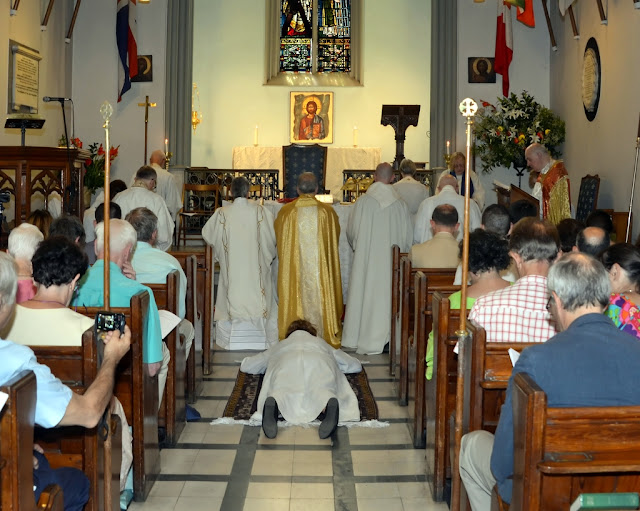 The congregation of the packed church proclaimed Πάντα άξια! (Panta axia) when the newly ordained Deacon Christine Rosamund Saccali, vested in dalmatic, the traditional vestment of her order, was presented to the people. This traditional cry "worthy!" was just one of many expressions of exuberant joy on Christine's ordination day. 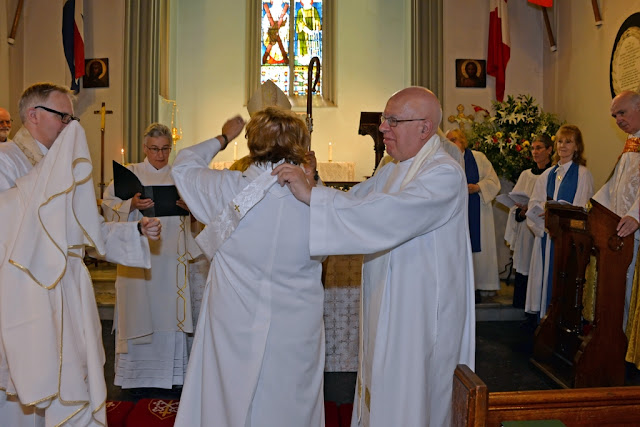 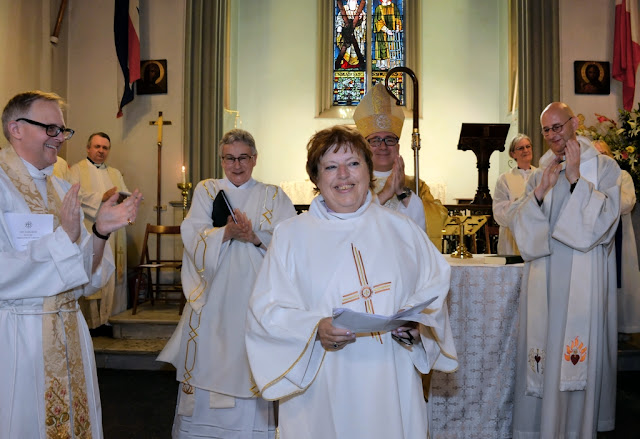 Ecumenical guests from the Salvation Army, the Roman Catholic Church and the Greek Orthodox Church joined parishioners and family and friends of Deacon Christine. Diocesan colleagues from the Canary Islands, Varese, Madrid, Belgrade and Crete flew in for the occasion. Archdeacon of the East Colin Williams and Director of Ordinands Canon William Gulliford presented Christine and her tutor, the Revd Charles Read, represented the Eastern Regional Training Course in Cambridge where Christine did her pre-ordination studies. 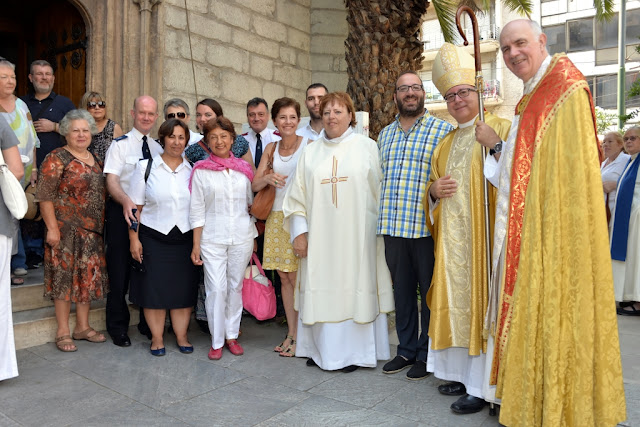 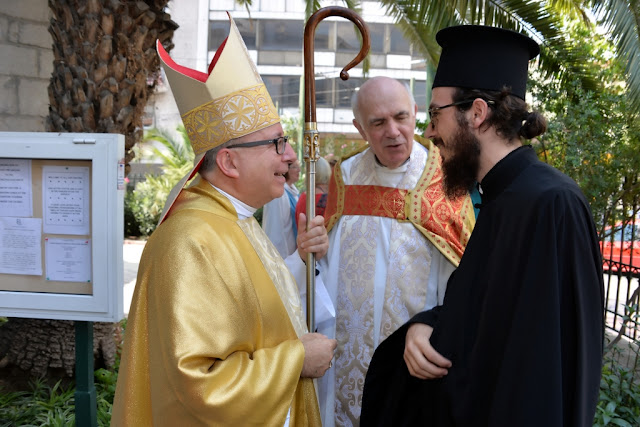 Deacon Christine will serve as assistant curate in the Greater Athens Chaplaincy, under the supervision of the Revd Canon Malcolm Bradshaw MBE, the Senior Chaplain. 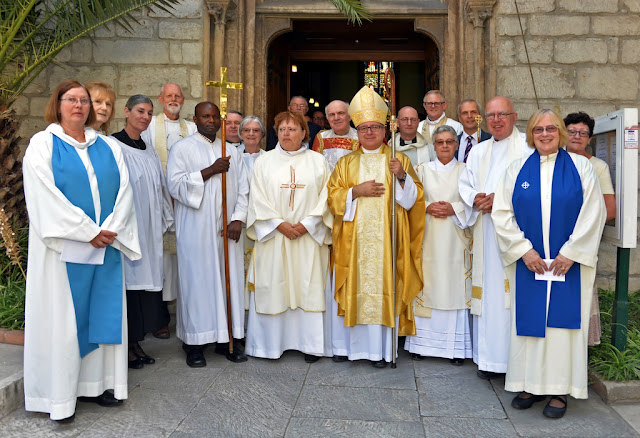 Posted by David Hamid at 00:05
Email ThisBlogThis!Share to TwitterShare to FacebookShare to Pinterest