The IARCCUM summit meeting of 36 bishops chosen as official representatives by their Churches from around the world for a momentous pilgrimage together to both Canterbury and Rome, has now drawn to an end. The summit marks the beginning of a new chapter of the official relations between the Anglican Communion and the Roman Catholic Church.

IARCCUM stands for the International Anglican-Roman Catholic Commission for Unity and Mission. I have the great privilege of being the Anglican co-chairman of the commission; my Roman Catholic counterpart is Archbishop-designate of Regina, Canada, the Most Revd Donald Bolen.


It was a packed week with significant times for prayer and worship in such places as Canterbury Cathedral, St Peter's Basilica and St Paul's Outside the Walls in Rome. Much hard work was done in plenary and small group work and drafting sessions. There were very important meetings and encounters with the Pope, Archbishop of Canterbury, Cardinal Pietro Parolin (the Vatican's Secretary of State), Cardinal Kurt Koch (President of the Pontifical Council for the Promoting Christian Unity) and other officials. We received major theological input from Dr Anna Rowlands of Durham University on the Social Teaching of Anglicans and Roman Catholics. We made and heard presentations at a major academic symposium held in the Gregorian University.  And deep and committed friendships were formed.


It is impossible to summarise the many fruitful outcomes of the summit. In the days and weeks ahead these will appear on our official IARCCUM website, which is linked to from this blog. Nevertheless here are some very brief highlights which point to the historic nature of this meeting:

We affirmed our common faith


We discovered deep dimensions to the "certain but imperfect communion" we share:

A commission from Pope and Archbishop

At a service they jointly led at the Church of San Gregorio al Celio, while referring to obstacles to our full unity, Pope Frances and Archbishop Justin Welby nevertheless stated that despite these differences "we are undeterred". The Pope and Archbishop commissioned the IARCCUM bishops


So much more can be said, and our IARCCUM work in a new and vigorous phase now begins.


Below is the official communiqué from the IARCCUM summit.


Commnuniqué from IARCCUM Summit
"New steps on an ancient pilgrimage: Together from Canterbury to Rome"

IARCCUM 2016 has been an extraordinary, historic summit, rich in symbolism and significance for the Anglican Communion and Catholic Church.

It brought together 36 bishops from around the world for a week in Canterbury and Rome to celebrate the deepening relationship between the two traditions over the past 50 years – and to find practical ways to work together to demonstrate that unity to the world and address its social and pastoral issues.

The days in Rome also saw the formal presentation of a document detailing 20 years of work on reconciling the two traditions by the Anglican-Roman Catholic International Commission. And the bishops attended a symposium on current relations between the churches and the possibilities of future co-operation and dialogue.

The time in Canterbury was also rich in symbolism. The Suffragan Bishop in Europe, David Hamid, gave the homily at a Catholic Vigil Mass in the undercroft of the Cathedral. The following day, the Archbishop-elect of Regina, Donald Bolen, preached the sermon at the Sung Eucharist.

Bishop David – who co-chairs IARCCUM with Archbishop Don – said the summit had been an historic time in the history of our official dialogue, and deeply valuable.

“This has been an immensely rich occasion, full of significance for our two traditions. It has been a source of deep joy to all the bishops gathered from all over the world, who have shared their experiences, their challenges and their wisdom. It was a profound time of collegiality and communion, and they are inspired now to go out into the world and work together for unity and common mission.”

Archbishop Don said it had been an incredible time and he was excited about the future.

“The bishops engaged in everything in a way that was beautiful to see. Strong friendships have formed. In our discussions, we did not shy away from the difficulties we sometimes face. But the possibilities for our two traditions working together in a needy world are abundant and promising.”

One of the bishops, Archbishop Paul Nabil El Sayah from Beirut said the summit had been a joyful occasion that would yield practical results.

“The atmosphere has been very positive,” he said. “You can feel there is deep, sincere fellowship and a willingness to bring new things forward. I am completely sold on practical ecumenism. I see lots of potential. This is not about looking inwards but about coming to the outside world together. The more we come together, the more our message has credibility.”

Bishop Alwin Samuel, from Sialkot in Pakistan, has been working alongside Archbishop Sebastian Shaw from Lahore during the summit. Bishop Alwin said he was looking forward to collaborating more with the Catholics at home.

“We have been looking at how we can take concrete steps towards unity. One example is where we have existing projects of our own. We looked at how we could begin to work together on them. For example, in areas such as health, especially women’s health, where one church might provide the resources and the other would deliver them.” 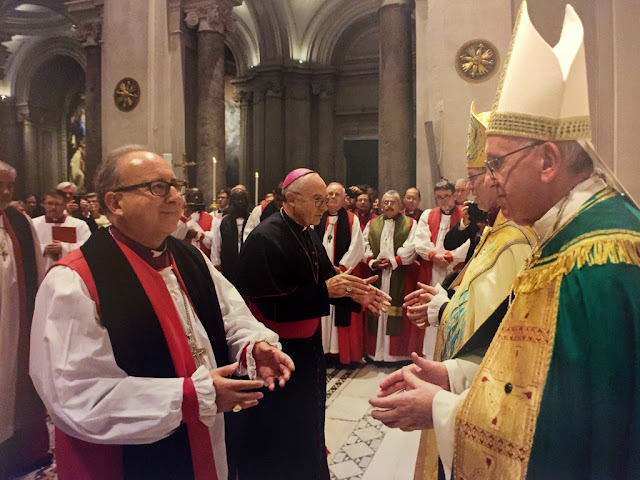 Posted by David Hamid at 09:14
Email ThisBlogThis!Share to TwitterShare to FacebookShare to Pinterest