Chrism mass in the city of St Ambrose 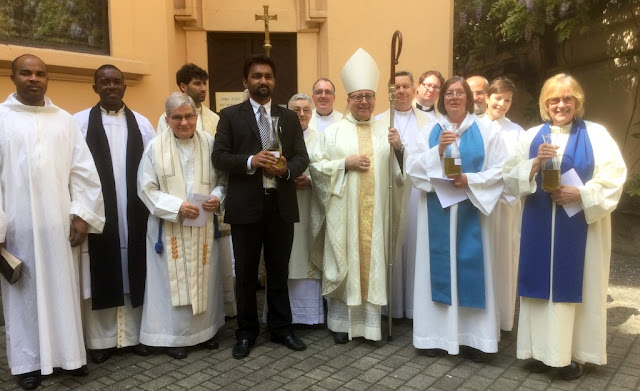 The Archdeacon of Italy and Malta, the Venerable Vickie Sims, hosted a Chrism Mass in her parish of All Saints, Milan on Tuesday. Clergy and Readers from Italy, Denmark and Spain gathered for the annual service at which the oils used for baptism, anointing the sick and confirmation are blessed, and the diaconal and priestly vows of ordination are reaffirmed, along with the promises made by licensed lay ministers, or Readers.

The celebration was enhanced by the presence of Archbishop Sir David Moxon, the Director of the Anglican Centre in Rome, who was able, along with me, to reaffirm his vows as a bishop in Christ's Holy Catholic Church. Archbishop Moxon retires from the Anglican Centre in Rome later this year. We were able to pay tribute for the way has has opened so many doors in Anglican-Roman Catholic relations during his time as Director, and for the warmth of our present A-RC relations, which is due in no small part to his remarkable ecumenical ministry. His Associate Director, the Revd Marcus Walker, was accompanied him to Milan for the mass.

An added joy during the service was the formal reception of the Revd Giovanni La Rosa into the communion of the Church of England. I will be writing more about Fr Giovanni's remarkable ministry later.

As always in our scattered diocese, it is with a real sense of fellowship that clergy and lay ministers gather on occasions such as this, and it does offer me a chance, as bishop, to thank them for their dedicated service. Archdeacon Vickie was an excellent host, and she and volunteers from the parish provided a warm reception and lunch for the guests who had come from near and far for the service. 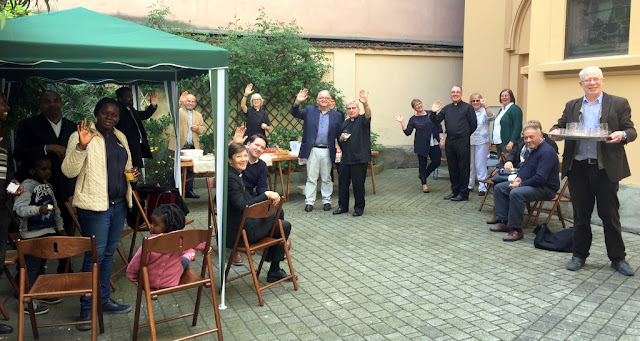 Posted by David Hamid at 22:51
Email ThisBlogThis!Share to TwitterShare to FacebookShare to Pinterest