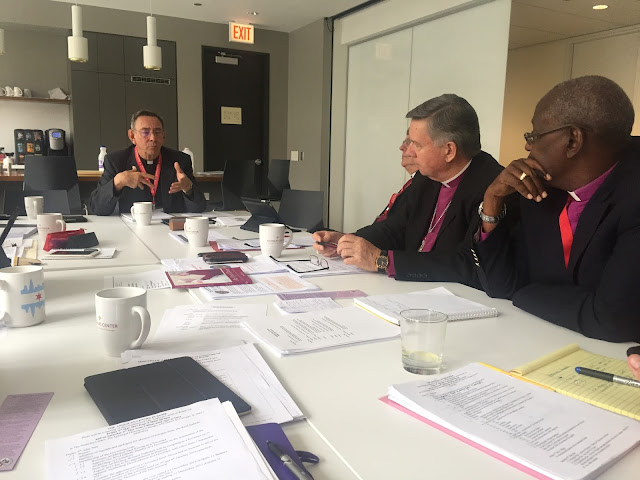 The Board of Governors of the Anglican Centre in Rome on which I serve recently had a meeting in Chicago, hosted by the Episcopal Bishop of Chicago, the Rt Revd Jeff Lee. It was the last meeting of the Board during the time of the current Director, the Most Revd Sir David Moxon, who will be stepping down at the end of June after almost 5 years in post. It was a chance for US friends and supporters of the Centre to express their gratitude to Archbishop David for his outstanding achievements in Anglican-RC relations during his time as Director.

(Incidentally, the Diocese in Europe Board of Finance makes a small annual grant to the Anglican Centre. Canon Ann Turner is our Diocesan Representative).


I had the privilege of preaching and presiding at one of the many flourishing parishes in the Diocese of Chicago, Christ Church, Winnetka, Illinois. There are over 50 in the choir at Christ Church, and 110 young people involved in activities during each week.

Archbishop David's successor as Director, Archbishop Bernard Ntahoturi, who takes over in September, was present at the meeting, as he is currently a Governor. Archbishop Bernard has extensive ecumenical experience, having served as a member of the Central Committee of the World Council of Churches since 1998, and co-moderator of the Permanent Committee on Collaboration and Consensus which brings together representatives of the Orthodox, Anglicans and Reformed Churches. He has also served on the Executive Committee of ACT (Action of Churches Together) International and participated in the creation of the new ACT Alliance which is the ecumenical branch of the WCC for Relief and Development. He has been active in seeking peace in war-torn native Burundi, where he is vice chair of the Burundi Truth and Reconciliation Commission. He also chairs the Inter-Anglican Standing Committee on Unity, Faith and Order (IASCUFO). Archbishop Bernard speaks French, English, Kirundi and Swahili and is looking forward to learning Italian! I have had the privilege of many years of friendship with Archbishop Bernard, having worked with him when I staffed the Primates' Meetings of the Communion.

Archbishop Bernard will be formally installed as the Director of the Anglican Centre in October, but he was recently informally introduced to the Pope by Archbishop Sir David Moxon.

Posted by David Hamid at 14:26
Email ThisBlogThis!Share to TwitterShare to FacebookShare to Pinterest