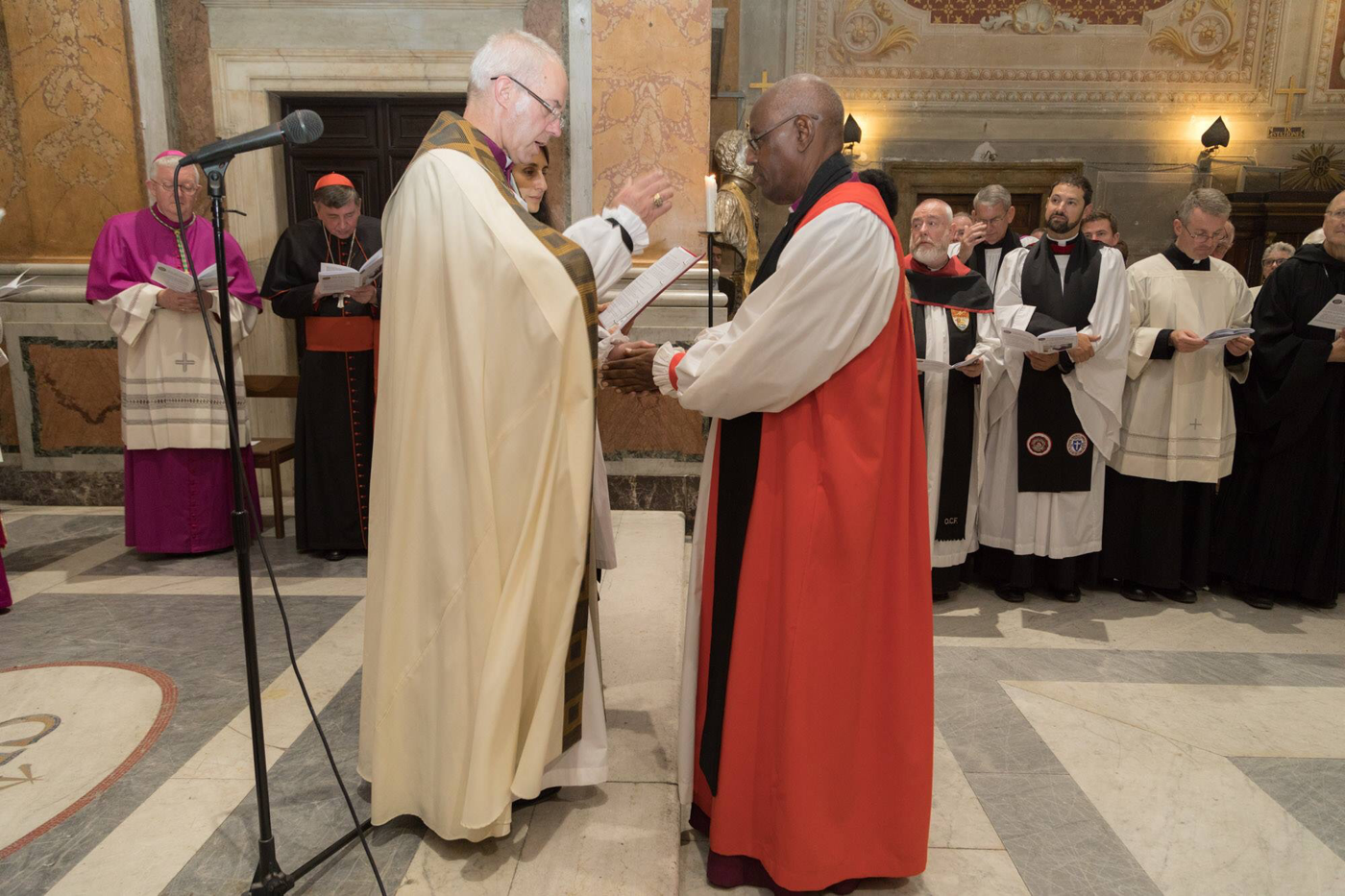 The journey of Anglicans and Roman Catholics towards the goal of visible unity was given a further impetus yesterday, 26 October, when the new Director of the Anglican Centre in Rome and the Archbishop of Canterbury’s Representative to the Holy See, Archbishop Bernard Ntahoturi, was installed in post by Archbishop Justin Welby.
The service which was Anglican Evensong sung by the joint choirs of All Saints Anglican Church and St Paul’s within the Walls Episcopal Church, (with our own Canon Jonathan Boardman of All Saints as Cantor/Precentor), was held in the Caravita Church, the home of an English-language Roman Catholic Community in the city. There was a hearty assent from Archbishop Bernard when the Archbishop of Canterbury asked him “Will you commit yourself to the ministry of reconciliation striving to make visible the unity of the Church in Christ?”
The homily was preached by His Excellency Archbishop Paul Gallagher the Secretary for Relations with States from the Vatican’s Secretariat of State. Archbishop Paul affirmed that our journey towards unity was not merely about cooperation but was in fact a moral imperative, as it comes from the wish and prayer of Christ himself. After the formal installation, Archbishop Bernard was formally welcomed by His Eminence Cardinal Koch, the President of the Pontifical Council for Promoting Christian Unity, Her Excellency Mrs Sally Acworth the UK Ambassador to the Holy See (on behalf of the diplomatic community), the Revd Canon Jonathan Boardman on behalf of All Saints, the Revd Austin Rios on behal of St Paul’s Episcopal Church, and the Revd Tim Macquiban on behalf of Churches Together in Rome.
Archbishop Bernhard is a former Primate of the Anglican Church in Burundi. He has served on the Anglican Consultative Council and has been active in seeking peace and reconciliation in the Great Lakes region of Africa. He is the first African to hold the post of Director of the Anglican Centre, and the first Francophone. At the Evensong the first reading was in French and a Burundian song was sung to mark the significance of this appointment. It is a marvellous sign of the Church’s catholicity that the Anglican Communion now has an African legate to a South American Pope!
The service, which so many remarked underlines the reality of a deep committed and fruitful official relationship between the Anglican Communion and the Roman Catholic Church, concluded with a solemn blessing given together by the Archbishop of Canterbury, Archbishop Bernard and Archbishop Paul Gallagher. (Photos courtesy of the Anglican Centre in Rome)
Posted by David Hamid at 10:38
Email ThisBlogThis!Share to TwitterShare to FacebookShare to Pinterest