An ecumenical Christmas service in Venice 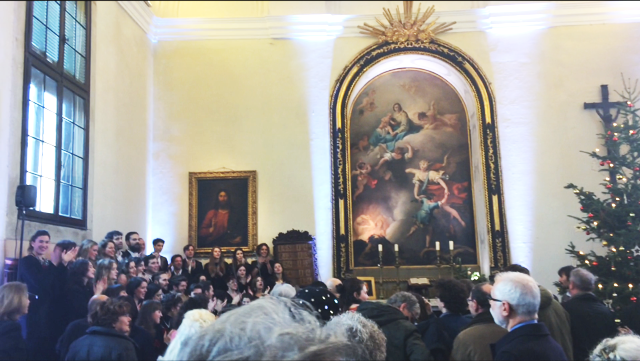 On Christmas morning, the Italian State Television Channel RAI 2, broadcast a pre-recorded ecumenical service from Venice. Held in the German Lutheran Church, representatives from the Greek Orthodox, Roman Catholic, Waldensian, German Lutheran, Anglican, Adventist and Baptist Churches all made contributions. The music was varied ranging from Byzantine and Gregorian chant, to a songs by a Gospel choir and carols in Latin. German and Italian were the languages of the service. The Patriarch of Venice was one among others who provided brief reflections on the feast whilst children distributed candles lit at the close of the service.

It was a substantial ecumenical congregation which gathered, with limited standing room only at the beginning of the service. The picture above shows the Gospel choir standing to the side of the sanctuary in the Lutheran church.

Fr Malcolm Bradshaw, the Chaplain of St George's Venice, who was of course present for the service, commented, "For such a wide grouping of Churches to feel at home in each other’s company and together deliver such an act of worship and to go public on it was a rich experience. I hope that perhaps the same can be done next year and following years as part of our bonding together."

Posted by David Hamid at 13:41
Email ThisBlogThis!Share to TwitterShare to FacebookShare to Pinterest