Ecumenical life is celebrated each Shrove Tuesday in All Saints Rome


Shrove Tuesday is an ecumenical occasion in All Saints Rome. For the parish to have an annual ecumenical celebration around their patronal feast would be almost pointless as All Saints Day and the surrounding days in Italy are taken as holidays. So the solution for many years is to hold an ecumenical service and event on Shrove Tuesday, which does not feature greatly on any Church or civic calendar, and thus ecumenical partners are general free to attend.

This year clergy from the Roman Catholic, Greek Orthodox, Methodist, Lutheran, Baptist and traditions joined Canon Jonathan Boardman, the Chaplain, for Solemn Mattins according to the Book of  Common Prayer. The preacher was the Revd Dana English, the Assistant Priest at All Saints. This was Dana's last official engagement in Rome, as she is moving shortly to England. Other Anglican clergy in Rome, from St Paul's-within-the-walls Episcopal Church and the Anglican Centre, as well as some studying in the city were also present, along with Ambassadors to the Holy See from Canada, Georgia and Slovenia.

After the service a lunch was hosted by the parish for all the visitors, concluding with an ecumenical pancake toss. Surely unique in Christendom! Can you spot the pancake "fryer"? 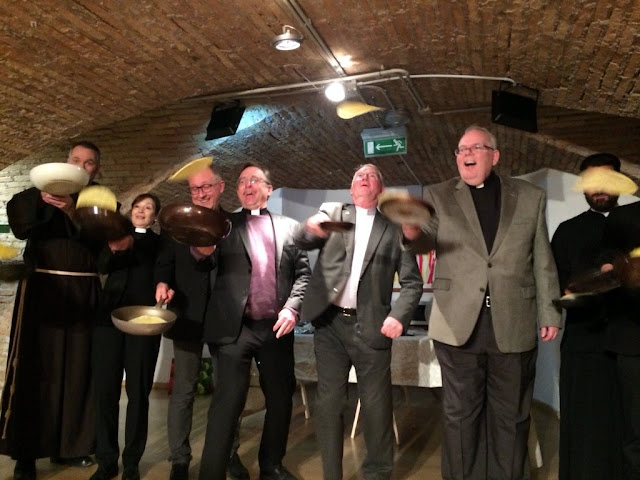 Posted by David Hamid at 08:31
Email ThisBlogThis!Share to TwitterShare to FacebookShare to Pinterest