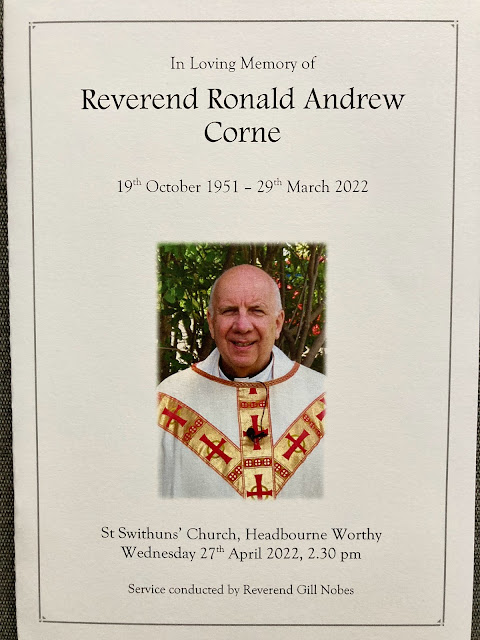 Last Wednesday 27 April, in St Swithun's Church, Headbourne Worthy, we laid to rest the Revd Ronald Corne, chaplain of All Saints Puerto de la Cruz, Tenerife, with St Martin de Porres, La Palma, Spain. Fr Ron fell ill in February, and after a brief time in hospital in Tenerife, decided to return to the UK to be close to his family. He died shortly after his return.

The moving tributes given at the funeral recalled Ron's cheeky smiles and infectious laughter, his quick witted jokes, but above all that he was a spiritual and wonderfully giving person, loved by so many. He will be sorely missed by his parishioners in Tenerife/La Palma. Many had not been aware of how seriously ill their priest was, as Fr Ron, always a private man, did not wish them to worry or fret about him.

Fr Ron wanted to be buried in St Swithun's, one of the churches in a benefice he once served in the Diocese of Winchester. His entire ministry prior to coming to the Diocese in Europe three years ago was in the Diocese of Winchester, where he was the Area Dean of Romsey. Clergy colleagues from both dioceses were present at the funeral to bid farewell to their brother priest. The service was led by the Revd Gill Nobes, who had been Ron's curate at one point. I was privileged to deliver the homily and to preside at the commendation.

Lord God, may your servant and priest Ron, who devoted a faithful ministry to your name, now rejoice in the perpetual company of your saints.

Posted by David Hamid at 11:23
Email ThisBlogThis!Share to TwitterShare to FacebookShare to Pinterest