The mind of the Communion

In the last few days the bishops going to the Lambeth Conference received the first information about decisions that may be before us. “Calls” is the term used, for declarations and affirmations that the bishops will be asked to consider and vote on. The Calls are largely non-controversial and many of them are, in my view, very good statements related to our work in areas of evangelism, reconciliation, Christian unity, environment, sustainable development and safeguarding among others. One particular reference in a section entitled Human Dignity has attracted some attention. The bishops will be asked to affirm:

It is the mind of the Anglican Communion as a whole that same gender marriage is not permissible. Lambeth Conference I.10 (1998) states that the “legitimizing or blessing of same sex unions” cannot be advised.

I am likely one of only a few bishops going to this year’s Lambeth Conference that was present in 1998. I was not a bishop then, but on the ACC staff as Director of Ecumenical Relations and Studies and thus involved as staff of Section IV which dealt with ecumenical relations. (In 1998 the 800 bishops were divided into four sections, roughly 200 in each, for the best part of 2 weeks deliberations.) I had the privilege of being part of the daily steering group meetings when we received reports on the progress of the section discussions. I recall Archbishop Njongonkulu, the then Primate of Southern Africa who headed up Section I which dealt with human sexuality (among many other topics), reporting towards the end of the 2 weeks that there would be no resolution from the section bishops on human sexuality, as they did not believe the Communion was ready to agree such a resolution at that time. He did say that they had prepared a report, however, which summarised the range of the discussion and the journey so far. Resolution I.10 did not originate from the bishops in the section where the discussion on human sexuality issues took place.

In light of the insertion of reference to I.10 in the Lambeth 2022 preparatory document which we have just received, it is perhaps useful to recall what the bishops in the section which discussed the matter in 1998 actually said. It is a conservative statement overall and can be found here: Section I.10 - Human Sexuality (anglicancommunion.org). But it makes some important points as to where the bishops were at that time. Here is an extract (emphasis mine):

We have prayed, studied and discussed these issues, and we are unable to reach a common mind on the scriptural, theological, historical, and scientific questions which are raised. There is much that we do not yet understand …

The challenge to our Church is to maintain its unity while we seek, under the guidance of the Holy Spirit, to discern the way of Christ for the world today with respect to human sexuality. To do so will require sacrifice, trust and charity towards one another, remembering that ultimately the identity of each person is defined by Christ.

24 years ago the bishops honestly stated they were not of one mind. In 2022 can we reliably state what is the “mind of the Anglican Communion as a whole”? 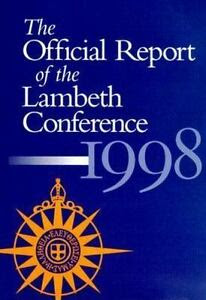 Posted by David Hamid at 16:22
Email ThisBlogThis!Share to TwitterShare to FacebookShare to Pinterest