St Vincent brings communities and churches together in Algarve 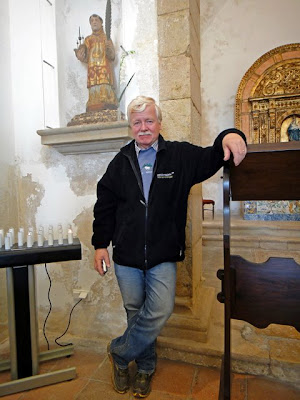 About 20 people from 10 different countries (mostly European but including China and Malaysia) form a group called the "Algarve Wednesday Walkers" headed by Fr Bob Bates, chaplain at St Vincent's Algarve. On a recent walk on 19 January, from Cape St Vincent to Sagres, Fr Bob stopped to lead prayers at a little chapel in the fortress in Sagres where St Vincent's body was washed ashore, according to tradition. Fr Bob is pictured above with a rare 6th century statue of the saint. The walkers have adopted St Vincent as their patron.

Later that week, on 21 January, the eve of St Vincent's day, an ecumenical service was held in the Cathedral in Faro which brought together clergy from several traditions including our own. The service was partly in English and partly in Portuguese, with a little Romanian thrown in! Below from left to right are Padre Oleg Trushko – Greek-Catholic; Fr Bob Bates, Bishop Manuel Quintas of Algarve; and Padre Ioan Rasnoveanu – Romanian Orthodox.

The delegation from our own congregations led the singing of the concluding hymn: “Thy hand O God has guided” with Portuguese joining in the “One Church, one faith one Lord!” verse endings. Posted by David Hamid at 00:15
Email ThisBlogThis!Share to TwitterShare to FacebookShare to Pinterest