Message for our Turkish congregations 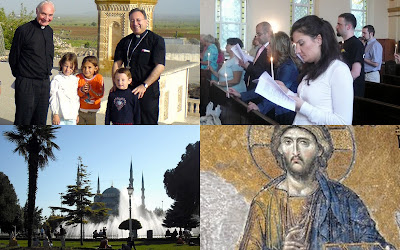 This Sunday parliamentary elections will be held in Turkey. We have several congregations in the country (Christ Church, Istanbul; Resurrection, Istanbul; St Nicholas, Ankara; and St John the Evangelist, Izmir with St Mary's Didim). Our members there, and all of us across the diocese, will be watching the results closely.

Turkey is a key country geopolitically. In recent days refugees from Syria are flowing over the border, to escape violence and repression in their own country.

This Sunday is Pentecost and we will read in the Acts of the Apostles about the peoples of the world, in their own languages, speaking of God's deeds of power. Among those listed were residents of Cappadocia, Pontus, Asia, Phrygia and Pamphylia - all in modern day Turkey. So please remember Turkey in your intercessions, for the citizens who will be going to the polls, and for the authorities who seek to respond to the humanitarian crisis on their borders.

Today I sent, on behalf of the diocese, this message to our Church of England clergy and congregations in Turkey:

As Turkey approaches parliamentary elections this Sunday, I want to assure you of the prayers of the people of the Diocese in Europe for the electorate and for the future of the country.

It is clear that this will be an important election. Some of the questions facing the country such as its duty of care for minorities, the future integration into the EU, the continuing development of a foreign policy that may be a bridge between East and West, are certainly of interest to us all in Europe. The international press continues to report on the internal debate about changes to the present set of constitutional checks and balances, as well as on work to be done pertaining to the role of the media itself. We are aware of the growing importance of Turkey in today’s world and of the challenges that any government will face in continuing to build a flourishing, modern society.

The world has noted the contrast between the stability of Turkey on the one hand and the struggles of its Arab neighbours on the other. We pray for a deepening role for Turkey as a beacon of democracy, tolerance and economic growth which benefits all its citizens.


Loving Father,
Help the people of Turkey to make wise choices in the forthcoming election.
Bless the people and guide all who are elected to serve them.
And help each of us to use the gifts you give us, to your glory and for the good of all.
Father, we offer this prayer though Christ our Lord.

With warm greetings and blessings

Posted by David Hamid at 17:42
Email ThisBlogThis!Share to TwitterShare to FacebookShare to Pinterest