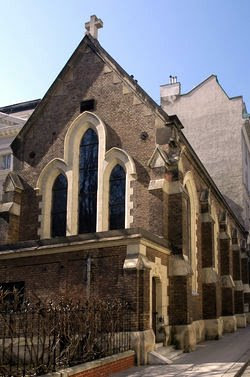 There is a heroic chapter in the history of Christ Church Vienna which is about to be featured in a documentary by BBC Radio 4.
The chaplain of Christ Church at the time of the Anschluss or annexation of Austria by the Nazis in 1938, the Revd Hugh Grimes, began baptising Jews in attempt to protect them, believing that a baptismal certificate from the Embassy Chapel of the Established Church of England would buy some time for them to arrange papers to leave the persecution. When Fr Grimes was recalled to London, the baptisms were continued in Christ Church by retired priest (and former Chaplain of Cologne), the Revd Frederick Collard.
BBC Radio 4 will feature this story as part of the series "Document". Altogether over 1800 Jews were baptised in Christ Church in the summer of 1938.  Giles MacDonogh and  have been researching this fascinating story for several years and the programme includes contributions by them as well as by Archdeacon Patrick Curran, the Chaplain of Christ Church, and Fred Gruber.

The broadcast will be on BBC Radio 4 on Monday, 8th August at 8pm (BST).
For those not in the UK, it can be heard live online at 21.00 (Continental time) via the Radio 4 website http://www.bbc.co.uk/programmes/b006sk3k and for at least a week after the actual broadcast.

Posted by David Hamid at 08:32
Email ThisBlogThis!Share to TwitterShare to FacebookShare to Pinterest