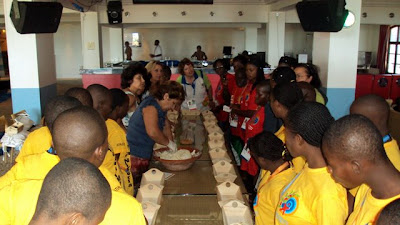 The Special Olympics were hosted in Athens from 26 June to 6 July. This global event is is modeled on the Olympic Games but dedicated to those who live with restricted learning abilities. 157 nations participated with Britain sending a team 150 strong along with the trainers and support members. Each participant and helper had to raise £2,000 to fund their part in the games.

St Paul's Church in Athens was on hand to assist with the welcome and support for this event. Christine Saccali, Reader, signed up as a volunteer to assist with translation. In the photograph above Christine is seen with the Nigerian team much involved in making bread. Below, she is pictured with a medalist from El Salvador, a power lifter. On Sunday 26 June participants in the Special Olympics joined St Paul's congregation for worship. The following Monday the Senior Chaplain, the Revd Canon Malcolm Bradshaw, met with the British team at a reception given by H.M.Ambassador.

The Special Olympics are an extraordinary event which reveals what those who have limited learning ability can actually achieve when the appropriate care, organization and dedication is extended to them. Sadly, this year's Special Olympics, complete with beautiful opening and closing events, received very little publicity. Instead the Greek economic crisis and its accompanying demonstrations caught the world's headlines.

The next Special Olympics will be four years, just outside the diocese, in South Korea. Fr Bradshaw says if we should spot anyone who uses, in both formal and non-formal situations, red plastic shoe laces, it is a sign that the wearer is associated with the Special Olympics, and a custom started by the British Team.

Posted by David Hamid at 09:03
Email ThisBlogThis!Share to TwitterShare to FacebookShare to Pinterest